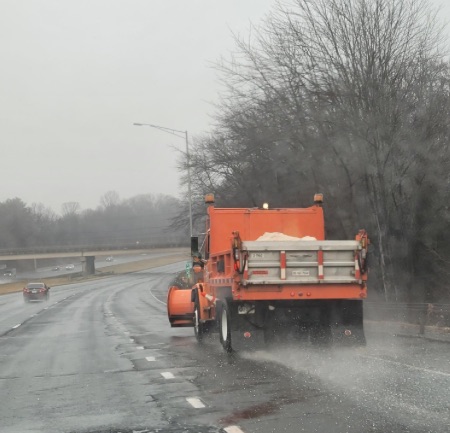 The Connecticut Department of Transportation posted a photo of one of its trucks treating a highway Wednesday morning.

MONROE, CT — Freezing rain and slippery road conditions led to spin outs, minor fender-benders and traffic delays Wednesday morning. Amid the unsafe wintery conditions, Superintendent of Schools Joseph Kobza decided to close the schools and First Selectman Ken Kellogg allowed Town Hall staff to make their own decisions about driving to work based on their commutes.

“It sounded to me like every town was in the same boat,” Kellogg said, alluding to highway closings, road closings and delays among municipal employees coming into work. “We had some minor accidents, but nothing serious.”

“Several officers were held over from the midnight shift, while the day shift officers made it into work,” Corrone said. “Thankfully, none of the motor vehicle crashes this morning resulted in life threatening injuries.”

Public Works Director Chris Nowacki said police officers are his departments eyes, watching weather conditions overnight, when the DPW assesses whether or not to bring drivers in earlier in the morning.

Shifts begin at 6:30 a.m., but Nowacki said, “we had trucks rolling before that. We had an immediate response.”

The freezing rain had recently started, so Nowacki said his drivers headed out in their trucks to treat the roads with salt as soon as they arrived to work.

Early in the morning, the Highway Department communicated with the Superintendent’s Office to discuss whether to have a delayed opening or cancel the school day.

“Quite honestly, I have never seen conditions change so rapidly,” Superintendent of Schools Joseph Kobza said. “At 5:55 I went outside and there was absolutely no precipitation. I had been corresponding with all of the Western Connecticut superintendents and everyone was preparing for a full day of school. I went back outside 10 minutes later and everything was a sheet of ice.”

In addition to the highway department, Kobza spoke with the bus company.

“Both reported very icy conditions around town, so the decision was made to delay,” he said. “Conditions were not improving and I began getting reports of multiple road closures, highway closures, and accidents. I spoke to the highway department again and they were having difficulty getting around town to treat the roads. It was clearly a safety issue for all students and staff, so we ultimately made the decision to close.”

“I’d always prefer to notify families a little earlier than we did this morning, but conditions changed in a matter of minutes,” Kobza said.

Nowacki said Wednesday morning’s ice storm was the second winter event his department responded to this season, with snow on Christmas Eve being the first.

“This is a material eating storm,” he said, explaining how a strong enough salt mixture must be used to melt the ice, so trucks do not have to go out a second time.”

Though the town’s trucks managed to get out right away, Nowacki said, “it was horrible timing for everybody else people on the road going to work.”

Town drivers had difficulty getting to roads at times, while dealing with heavy traffic and Nowacki said emergency calls were a priority, with certain roads being treated first to ensure ambulances, police cars and fire trucks could get through.

“We had cars across the road,” Nowacki said of other challenges. “Some drivers thought their four-wheel-drive would aid them, but it does nothing on ice. Unfortunately, we had cars blocking our access to sections of roadway. Most shocking, we actually had people cutting off our trucks who didn’t want to wait for us to salt the roadway.”

In one instance, he said a driver passed a town truck at the intersection of Jockey Hollow and West Maiden roads, continuing up West Maiden to Benedict Road before spinning out.

“It was completely across the roadway, so the driver in our truck couldn’t treat the road,” Nowacki said.

He said the town was able to get to all of the sections of roads that needed the most attention, coming back to some areas where it refroze.

“Weather conditions changed over between 8:30 and 9 and we started experiencing some traffic movement,” Nowacki said.

State stats include one fatal crash

State roads were plagued with crashes and delays. Connecticut State Police reported that between 3 a.m. to 11:59 a.m. its officers responded to 726 calls for service, 101 motorist assists, 285 motor vehicle accidents, 30 crashes with injuries and one fatal accident.

The Connecticut Department of Transportation urged non-essential drivers to stay off the highways amid the slippery conditions.

🚨Essential Travel Only🚨Motorists are urged to stay off the roads if they can. Despite crews being activated at midnight, pre-treatment doesn’t stick to dry roads & rain washes it away, making freezing rain extremely dangerous. Please use extreme caution in icy conditions.

Many questioned the DOT response, so the agency used its Twitter page to explain it further. Though many still accused the DOT of making excuses.