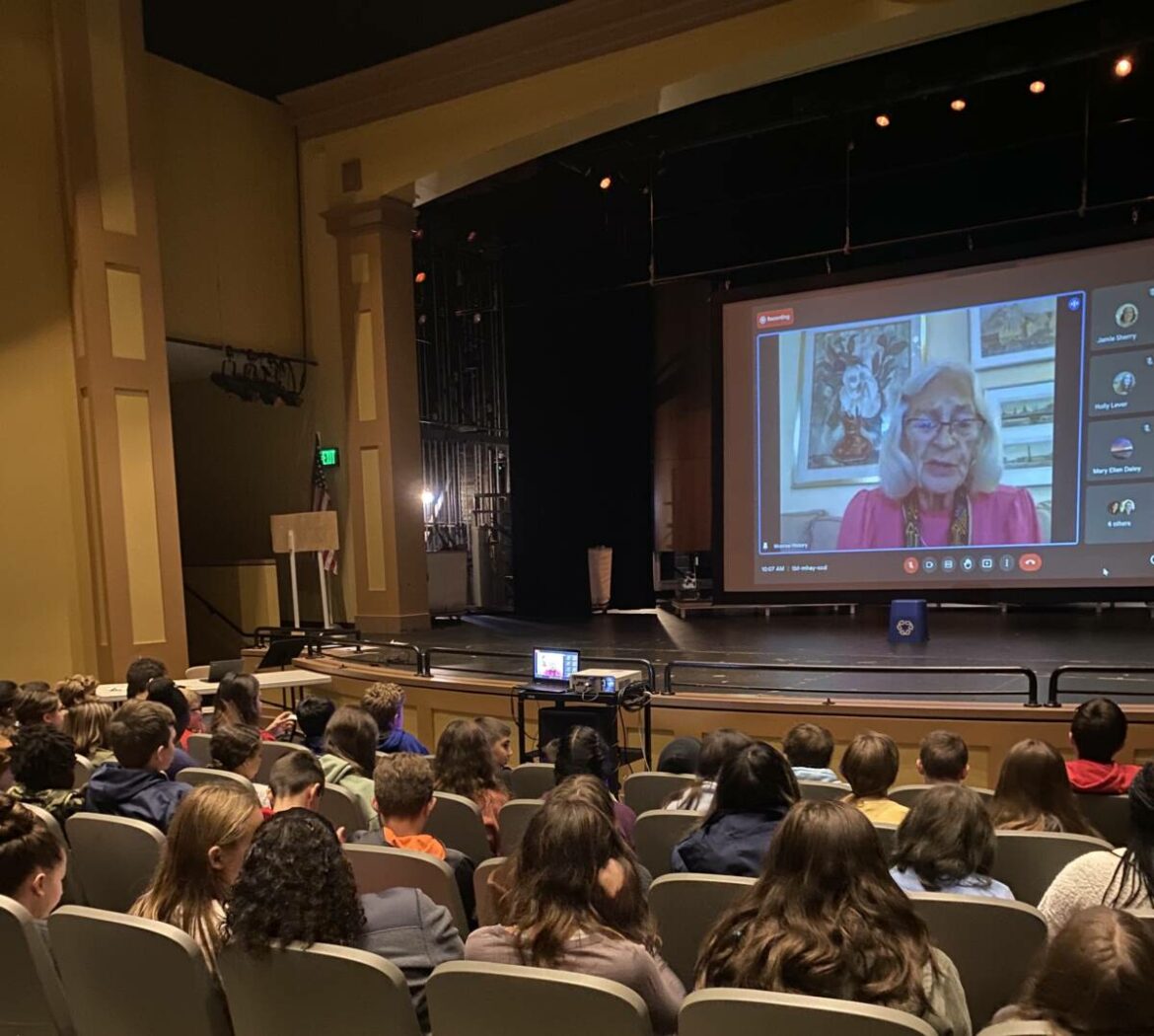 Ruth Weiner, 91, a Holocaust survivor, speaks to seventh graders in the Jockey Hollow STEM Academy, who are seated in the Masuk High School auditorium for the Google Meet event Thursday morning.

MONROE, CT — Ruth Weiner, 91, remembers the fear she and fellow Jews felt when she was an eight-year-old girl living in the city of Vienna, shortly after dictator, Adolf Hitler’s troops entered Austria and annexed it to Nazi Germany in 1938.

“I think that any Holocaust survivor will tell you the same thing, your childhood ended as soon as Hitler arrived,” she told seventh grade STEM Academy students during a Google Meet presentation at Masuk High School Thursday morning.

Weiner said Vienna is a beautiful city with parks and squares, adding large crowds would gather to hear Hitler speak.

“He was a demagogue,” Weiner said. “People used to listen to the radio. I asked my parents, ‘why does he scream a lot?’ That’s typical of a demagogue. Demagogues are dramatic.”

Weiner has spoken to Monroe students before. This year, Jamie Sherry, the district’s instructional leader of social studies K-12, invited her to talk to students who are reading “Refugee,” a book by Alan Gratz.

The book chronicles the stories of Josef, a Jewish boy who escaped from Nazi Germany in the 1930s; Isabel, a Cuban girl fleeing riots and unrest with her family for safety and freedom in America in 1994; and Mahmoud, a Syrian boy, whose family embarked on a long trek to Europe to leave the violence and destruction of their homeland behind in 2015.

Sherry said she believes hearing the story of Weiner, who is a Holocaust survivor, pairs well with the book. “Our students are blessed to hear your story,” Sherry told Weiner.

After Weiner spoke, she answered students’ questions. “You guys ask such good questions,” she told them more than once.

Some students watched Weiner on a big screen inside the Masuk auditorium and others from their classroom.

Spit in her face

“There is nothing special about me and my story,” Weiner began. “What I have to tell you is about other people. I was the only child in a very large family.”

Weiner loved playing with her adult relatives at home and going to school. I absolutely loved it,” she said. “I could read and, I hate to say it, but I was a teacher’s pet.”

But Weiner’s life would soon take a tragic turn.

The Nuremberg Laws were adopted, making Jews legally different from their non-Jewish neighbors.

Weiner saw signs at the park that said, “No Jews Allowed, No Dogs Allowed, No Spitting.” She also could not go to plays and concerts, which was something she had always enjoyed.

Weiner befriended a girl at school named Kitty, who broke her arm and wore a cast. The teacher put Weiner in charge of carrying her things and helping her with her coat.

One day, as Weiner was helping Kitty with her coat, her friend spit in her face, because she was a Jew.

Weiner was stunned and could not believe someone she considered to be a good friend would do that to her. “Right now, I have goose bumps,” she said while telling the story.

Weiner’s mother, Edith Frosh, told her that Kitty’s father must have joined the Nazi Party.

Weiner’s own father, Emil Frosh, a leader in the Socialist Party, was a political prisoner.

“That was good luck,” she said, “because he was in prison, he could not be sent to a concentration camp.”

A friend in the movement, a lawyer who was not Jewish, saved Frosh’s life. Weiner said, every so often, the lawyer would go to the prison, bang on the desk and say, “you have to keep this man protected. He is a key witness in my case for the Nazi Party.”

The Night of Broken Glass

On November 7, 1938, Ernst vom Rath, a German diplomat, was assassinated in Paris by a 17-year-old Polish Jew, who walked up to him and fired a gun five times at close range, according to History.com.

The Nazis used the incident to justify a two-day terror spree against German Jews called Kristallnacht, “The Night of Broken Glass,” which began on November 10, 1938.

She said the night began with the Nazis gathering books from stores, piling it in the middle of the street and setting it on fire. “I can still smell it,” she said of the distinct smell of burning books.

After the spitting incident at her school, Weiner’s mother transferred her to a school an hour away. The eight-year-old had to take two street cars alone and walk through a dangerous Jewish neighborhood.

Weiner said she tried to make herself invisible as she walked. She showed students a black and white picture of men and women cleaning the sidewalks on their hands and knees as “hoodlums” stood over them.

A cobblestone street was in front of her school and as she walked there one day, she saw “a mob of hoodlums, mostly young guys” making a pile of cobblestones outside the building.

While in her classroom, rocks crashed through the windows and the children and teachers heard men shouting hateful slurs.

“We went out of the building and down an ally,” Weiner said. “People were looking for Jews.”

There was a hierarchy of Nazi enforcers. The SA were made up of the dregs of society, according to Weiner. The SS wore black uniforms with lightning bolts, and then there was the Gestapo.

“The Gestapo was supposed to be secret police,” Weiner said, adding the pride of the men serving that role made them anything but secret. “They wore fancy leather coats and fedora hats,” she said.

Weiner’s mother took her to relatives to check on them. Then the two of them returned home. When they reached their front door, they saw two men from the Gestapo leaning against a building across the street, staring at them.

Feeling unsettled, they went inside. A time later, they heard a loud pounding on their front door.

“We know you’re in there,” men shouted. “We’ll tear the door down.”

“We were quiet,” Weiner recalled. “I found I could move across the wood floor on a pillow.”

The mother and daughter wrote notes to each other.

A telephone ring broke the silence.

Could it be about her husband in prison? Could her aging parents have problems? Weiner’s mother had to fight the temptation to answer it. The phone was by the door and if she answered it, it would give her and her daughter away.

Three hours passed, then it became six hours as the phone rang. They could not eat or go to the bathroom.

“We heard footsteps outside,” Weiner said. “We didn’t know if it was pounding feet or if they were leaving. My mother picked up the phone.”

“Don’t say anything,” a man’s voice said. “Don’t say a word. The Gestapo is outside your home.”

It was the lawyer who was helping Weiner’s father. He told her mother to dress in warm clothes and to give Weiner a doll to hold, so she wouldn’t have to give the Hitler salute. If they were expected to salute and the little girl’s hands were free and she failed to, it would give them away.

He pinned little gold swastikas on Weiner and her mother before the perilous walk to his house. “It was the only time in my life that I wore a swastika,” Weiner recalled.

The trio walked in the street as if it was a leisurely stroll, despite the billowing smoke from burning stores, Weiner said.

“He walked with us at great risk to his life,” Weiner said of the lawyer.

When students hear about Kristallnacht during its anniversary on Nov. 10, Weiner said they should remember that there were also good people who had the guts to go against orders.

Before World War II broke out, Kindertransport, a nine-month rescue effort authorized by the British government, was established, saving close to 10,000 children under age 17 from Nazi Germany, Austria, Czechoslovakia, Poland and the free city of Danzig by relocating them to the United Kingdom.

The children were taken in by British families. Weiner said it was the only effort by another country to save Jews who were in danger.

Though Weiner was not part of the Kindertransport, her mother managed to move to England where she worked as a maid and a family took Weiner in.

Weiner was eventually reunited with her parents, but several other members of her family either died in concentration camps or wound up in different countries and were never seen again.

Among the countries some relatives went to live were Italy, Yugoslavia, Israel, Australia, Cuba and the U.S.

“The worst part was being separated from the people I love,” Weiner said. “We had a large family.” Of those who died in concentration camps, she said, “how do you get over it? You don’t — thinking of someone you love being treated that way.”

Weiner said antisemitism is like a virus that is always there because, for some reason, people always need someone to hate.

She said something very similar to Hitler’s invasion of Austria is happening with Vladimir Putin and Russia’s attempted takeover of Ukraine.

“Hitler said, ‘you have always been part of our country,'” Weiner said, just as Putin tells Ukrainians. “Just because Germany and Austria speak the same language, doesn’t mean they have the same history and culture.”

While it can be easy to tune out bad news, Weiner told the children it’s their world and they should pay attention and stand up to hate.

“I’m looking at your faces and I’m so impressed,” she said after sharing her story. “You have been wonderful through that whole thing. I hope you keep that thoughtfulness.”

One student asked Weiner what the hardest part about becoming a refugee is.

“You’re the most homeless person on the planet,” she said. “You don’t have a home. You have no country. You’re really kind of looked at as a lesser kind of person. I was independent and all of a sudden I was nothing. When you’re a refugee, you’re a huge misfit — and nobody wants to be a misfit.”

The Nazis tried to take everything from the Jews, but Weiner’s mother managed to hide some family belongings in a huge crate. Weiner said it had practical and impractical things.

“There was china and vases my mother loved and portraits from paintings of my great, great, great grandparents that hung in my mother’s dining room,” Weiner said.

She remembers seeing her grandmother using a knife to carefully cut out the portraits and roll them up. She looked at Weiner and told her mother, “these are for her. She needs to know where she came from.”

“They were beautiful people, elegantly dressed,” Weiner said of her relatives in the paintings. “The portraits are hanging in my dining room. I have a strong sense of my family, who they were, what they did.”

“I’m able to talk with considerable accuracy about my childhood,” Weiner said. “That’s what I take with me. I realized how much of what you are is within you.”