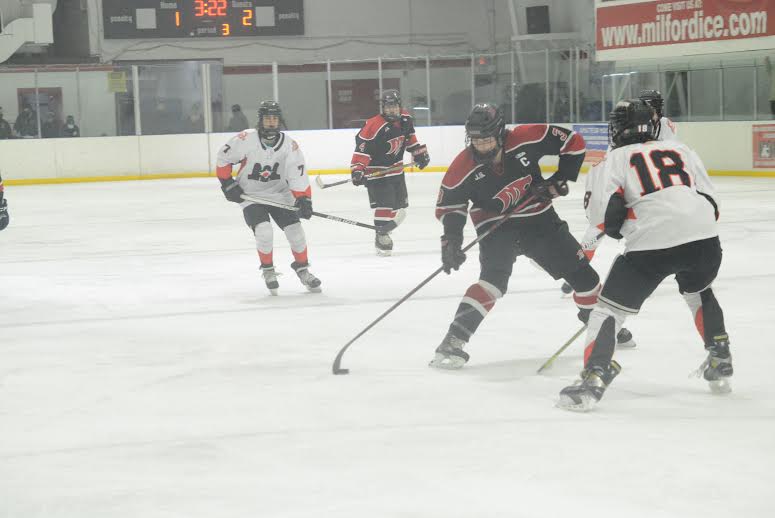 Drew Scalia controls the puck for Masuk against Milford in an earlier game this season.

SHELTON, CT — Masuk High’s boys hockey team skated to a pair of lopsided victories, toppling the Milford co-op 5-1 on Saturday, Feb. 12, and defeating nonconference foe Trumbull, out of the FCIAC, 6-1 on Monday.

The victories came following a tough 6-5 overtime defeat to Hall of West Hartford on Feb. 5. All three of these games took place at the SportsCenter of Connecticut. Masuk improved to 9-5 overall.

The win over Milford was Masuk’s second this winter; the Panthers won a 2-1 nail-biter on the road back on Jan. 8. The rematch of SWC/SCC conference rivals was not nearly as close.

Nick Kondub had two goals, Drew Scalia netted two goals and had a pair of assists, and Austin Braiewa notched a net-finder of his own. Juniors A.J. Michetti and Colin Deering both added assists.

Goaltender Tory Beck, with great support from the defensive units, was solid in net.

The win over Trumbull was an upset in terms of state divisional status; Masuk is a Division III program and Trumbull is D-II and has recorded 10 wins. Kondub racked up four goals — a hat-trick plus one to power the offense. 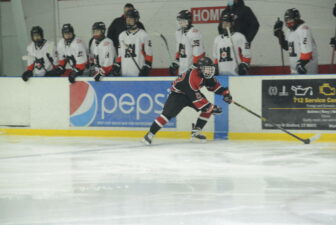 Austin Braiewa controls the puck for Masuk in a game earlier this season.

Scalia had a goal and two assists, and Braiewa also scored. Michetti supported his linemates throughout the game and tallied four assists.

It was a solid performance all-around for the Panthers. Kyle Sutfin has been a strong addition to the team with his physical presence and skill on the ice.

Senior captain Jack Cirillo leads the defense, and Justin Aleman, Colin Deering, Conner Ewald and James Cybart have provided nice play in front of Beck who has done a great job in the Masuk goal.