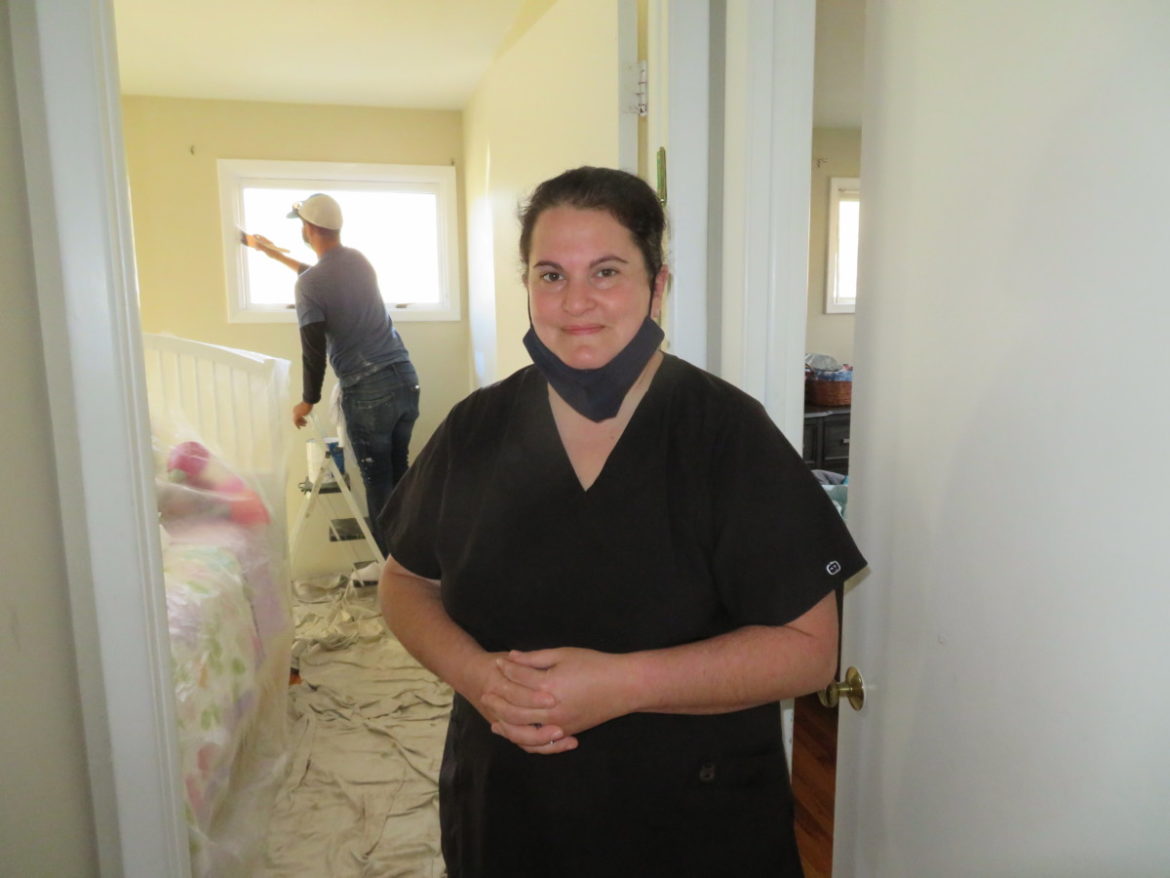 Michelle Kaplin, an R.N., who was honored as a Heartthrob Hero by MDF Painting & Power Washing, received two days of free painting inside her Monroe home.

MONROE, CT — Michelle Kaplin was on remote leave as a nurse at ACES Wintergreen Interdistrict Magnet School last the spring, when the COVID-19 pandemic forced educators to close the building. But, rather than stay home, Kaplin chose to join her colleagues on the front lines, taking a job at The Watermark, a continuing care retirement community in Bridgeport.

Kaplin, who now works at David Wooster Middle School in Stratford, served on the medical team at The Watermark, treating residents on the COVID floor, and witnessed the heartbreak of seeing some patients dying alone.

“I just felt this calling to go,” Kaplin said. “I just couldn’t imagine sitting home. It’s not about the money, it’s about helping people. I needed to do something about the pandemic.”

Kaplin, who lives in Monroe, was recently recognized as a Heartthrob Hero in MDF Painting and Power Washing‘s campaign to show appreciation to health care workers during the pandemic. 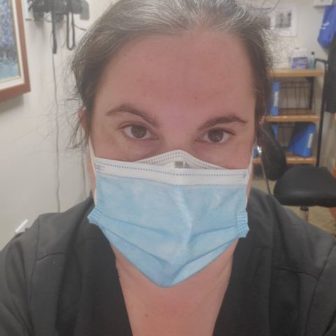 Michelle Kaplin, an R.N., at work at The Watermark in Bridgeport.

“We all know someone who is working at the front lines of this virus,” the company website says. “Whether it is a friend, family member, or significant other, those who work in healthcare are appreciated now more than ever. To say thank you to those who are working for us, we’re going to work for you. Nominate the frontline hero that you love for a chance to win them painting services worth up to $6,000. Say thank you by giving them one less thing to worry about.”

The campaign is named after the Sherwin William’s paint shade, Heartthrob, which inspired it.

Kaplin said she doesn’t have a clue who nominated her, adding she was surprised to receive a phone call about being awarded the free painting services from the Heartthrob for Heroes campaign.

“I thought it was a spam call and asked her to stop calling me,” she said of the woman from MDF. “Then she emailed me to say, ‘we’re not kidding.'” 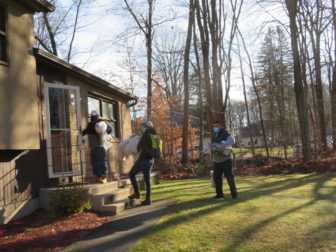 “Who would nominate me? I’m a nurse from Monroe and you’re in Greenwich,” Kaplin thought. “It’s nice. I’m just shocked. There were a lot of doctors and nurses in the ICU doing far more than I was. I was just doing my part in COVID land.”

On Thursday morning, a white van pulled up on Kaplin’s street and three painters from MDF emerged, carrying painting supplies. “I can’t believe they’re here and I’m not paying for this,” she said.

She expressed her appreciation to whomever nominated her, calling the painting services a nice gift.

Kaplin and her wife, Karen Widdows, recently paid Basement Systems to waterproof the walls and floors of their basement, and install a  drainage system with a sump pump, after two flooding incidents at their Monroe home.

“The guy left and said we should really get it painted. We couldn’t afford that,” Kaplin said. “I got cancer in December. My son was diagnosed with type 1 diabetes in February. Then COVID struck. No one was thinking about paint.”

Because of the pandemic, Kaplin said her radiation treatment was delayed by eight months and her first session was in August. 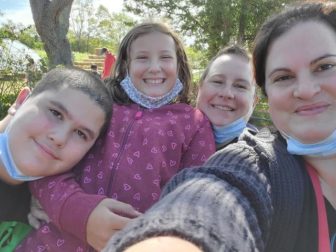 Kaplin and Widdows have a daughter, Emma, 10, and their 14-year-old son’s name is Shalom. Kaplin also has another daughter, Hadassah, 16, who lives with her grandmother, while going to high school.

Aside from type 1 diabetes, Shalom has Autism and a broken femur. The basement is set up like an apartment for him with a medical bed. His area will be painted a green color called Fern Canopy.

While working in the living room, Widdows, a human resources professional, was seated on the couch with her laptop and phone in her lap.

“I think it’s fantastic,” she said of her wife being honored as a Heartthrob Hero. “She deserves it. She worked hard. She has a good heart. When this was happening, she wanted to help out.”

Widdows said Kaplin would come home from work and sanitize herself inside their garage, before entering the house to make sure no one would get sick.

“I would spray Lysol and get undressed in the garage,” Kaplin said. “I kept my work clothes in there.”

“I would bring her clothes and she would come in and shower,” Widdows said. “The next day, we would take the work clothes from the garage.”

While treating patients, Kaplin said she never worried about catching COVID. One time, a woman with the disease checked in and was within inches of Kaplin, who said she was fortunate not to contract it.

She said she probably received 12 COVID tests, while working at The Watermark, where staffers were tested weekly.

The Watermark did not want to risk spreading the coronavirus by having too many visitors coming and going, so Kaplin said families could not visit their loved-ones, until they were at “death’s door.”

She said family members would either arrange for a video call or sit on a chair in the parking lot to look at their loved-one from their window, while talking on the phone.

When patients were near death, relatives could be suited up with protective gear and go in the room to hold their hand.

Kaplin said some relatives declined to visit, saying that was not how they wanted to remember their loved-one. She remembers talking to a woman, who was incapacitated, telling her that her family loved her, wanted to be there, but it was hard. Kaplan hoped the woman could hear her and feel comforted.

“People were scared to go in there. The longterm care facilities were hit the hardest,” Kaplin said. “That’s why we went into nursing. It was a calling. I was a school nurse on leave and I just couldn’t fathom sitting idly by, while people were dying.”

Kaplin said people at The Watermark were kind to the medical staff, providing lunches for them every day, adding, “those three months were perhaps the most rewarding of my career.”