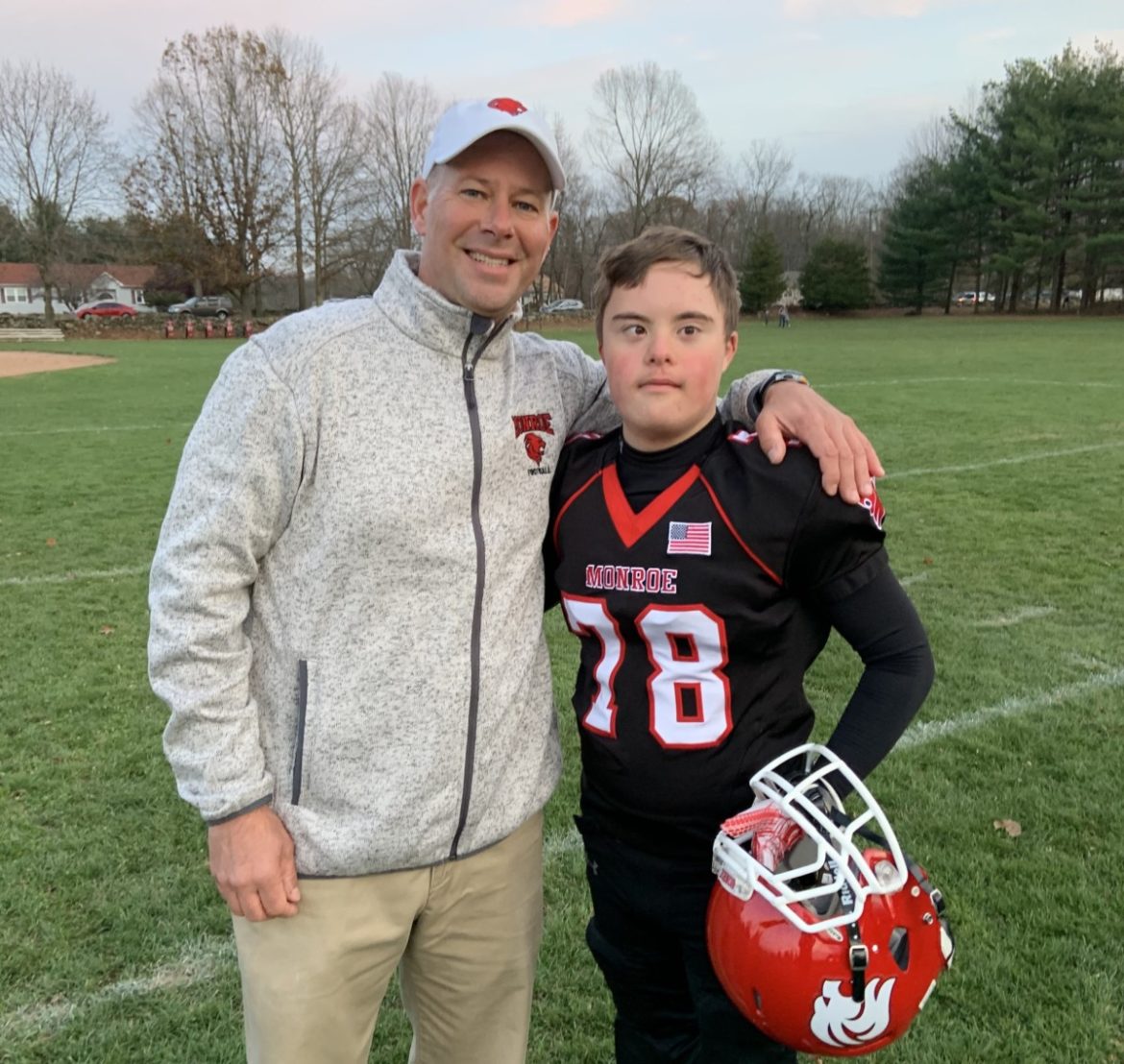 It all started with Mark Hope. James was 5 and we decided to sign him up for AYSO soccer. Mark Hope would be his coach. Mark was also a friend and neighbor, so it seemed like an easy way to start James in a typical sports program. This was no small decision because James has Down syndrome, and it was a struggle deciding when to take that leap of faith and sign him up for a typical youth sport.

Every Saturday morning during soccer season, I would be stressing on the sidelines, hands covering my eyes, shaking my head and mouthing “sorry” to Mark. But none of what James was doing (or not doing) mattered to Mark. James was on the field and on the team and every time I tried to apologize for James’ behavior, Mark would respond “its ok, he’s fine, he’s got this.”

I wasn’t convinced, but in the end, James got through the season productive in his own way, happy and more importantly, included. He would go on to play another season of soccer and it really was fine for him.

Fast forward a couple years and we decided to take another leap and signed him up for youth basketball. Pete Simoulidis would be the next coach to include James and to say “it’s ok, he’s fine, he’s got this.”

Pete didn’t treat James any differently than the other kids on the team. James was included in all the practices, warmups, layups and rotations within the game. When James took the court, it slowed the game down a bit, but everyone understood, stayed patient and celebrated every basket he made. The crowd went wild when he made his very first 3-pointer.

All of a sudden, James’ inclusion and successes became a little more public within the community. James was the talk of the town and it was all positive.

James has remained active within the youth basketball league in our town and has luckily always experienced an inclusive and positive head coach and teammates within this program. Because of this, we made a somewhat difficult decision to enroll home in the youth football program. And this is where the inclusion skyrocketed.

Jack Cotter (currently a coach in Newtown) was the flag football head coach for the Monroe team when we signed James up. I’m a football mom because my two older sons had been playing for several years, so I understood what being a football mom was, but I didn’t know what to expect with James and this sport.

Because I felt an obligation to manage James’ behavior, during the first practice I found myself, at one point, walking onto the practice field to redirect James, who had wandered slightly away from the team. Jack Cotter saw me walking before I saw Jack coming towards me and in one, fell swoop, I felt his hands on my shoulders, gently directing me back to my chair, saying “no mom, its ok, we’ll handle this, don’t worry about him,” and from that moment I knew this was going to be another good fit for James. 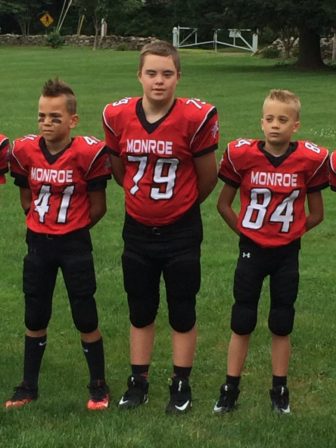 James Dutkowsky, center, went into Lions’ games as the team’s “secret weapon” to block or score a touchdown.

What followed for the next five years was the stuff a special needs parent only dreams of. JJ McGee, Jason Batch, Dom Viglione are just three of the many coaches that James had during his first several years with the Monroe Lions organization. And it was Head Coach Rick Henderson, who continued the tone that Mark Hope set: it’s ok, he’s fine, he’s got this.

In Rick’s eyes, James could do no wrong. Rick and all the coaches and teammates understood that James had his limitations on the football field and they just let him do his thing. If it was a hot day during practice and James had to lay on the field instead of run, they let it go. If he didn’t do all the stretches and warmup and drills exactly like all the other players, they let it go.

Rick and James created a special handshake they did after every practice, unique to just the two of them. During games, because James had physical limitations that prevented him from playing full on tackle football, Rick developed a plan for James that enabled him to participate: a “secret weapon” plan that put James on the field during a game.

Opposing players and coaches, briefed ahead of time, were always on board. This set up James getting some plays in as a “blocker” or scoring a “touchdown.” The touchdowns never made it onto the scoreboard because James just wanted to run with the ball and do his touchdown dance. And it let James feel like a superstar.

In the end zone he was mobbed, high-fived, bear-hugged not only by his teammates, but by the opposing players as well. A special shoutout to Teddy Clifford of the 79ers for always being James’ number one fan.

A decision was made early in the Monroe Lions process to hold James back with the younger players. Our reasoning being his mental age, his physical low tone and his learning limitations. And for four years it worked great.

But for the current 2019 football season, which actually just ended, James would be an eighth grader. He is bigger, a little stronger and a teenager. It was a difficult decision to move him up, because he was so beloved by his coaches and teammates.

Would that continue with another coach and team? Would he be included?  Would they be as understanding and patient? The 8th graders are one step away from high school football — would James be able to handle it?

We agonized over this, but with Rick’s blessing we decided to move him up to his actual grade level. He would now be an eighth grade Monroe Lion. I held my breath and crossed my fingers. And within his first week with the 8th grade team and Coach Joe Kobza, all my questions and concerns were answered with a resounding, “yes.”

Coach Joe Kobza is well known within our community as an educator and a parent. He doesn’t have a kid of his own on the Lions, but I can say with certainty that every kid on this eighth grade team belongs to Joe.

Joe, along with his assistant coaches Ray Kobza, Chuck Fenton and a third assistant coach (who I’ll mention later) and all the eighth grade players picked up where Rick left off. In their eyes, James is perfect.

The fact that James can’t keep up with what a typical football team demands only made this team stronger. When James fell behind, his teammates picked him up. When James didn’t know how to follow directions, his teammates and coaches verbally encouraged him. When he had to sit out of a drill, his coaches said “that’s ok James, go get some water.”

The team let James lead the warmups and the team rally cry. They helped him get into his gear. They buckled his helmet for him, and when he scored a touchdown, they ran along side him the entire way.

One cold and very rainy game, probably during the third quarter when everyone on the sidelines was shivering, Joe Kobza all of a sudden ran to his big bag, rummaged through it and pulled out a towel just for James…a Captain America towel.

He gently wiped James’ helmet and face mask, wrapped the towel around his shoulders and said, “I got this for you. Now you have a superhero cape.” This moment between the two of them will remain in my heart forever.

James is loved. These eighth grade Monroe Lions are a class act and I’m so proud of all of them. They are James’ best buddies and I know they will always look out for him.

The important thing to remember here is that all these coaches I just told you about are dads. They are the dads raising their children to do what they’ve modeled: inclusion, encouragement, patience and compassion.

A child with special needs deserves a chance to do what all typical kids get to do. If they stumble or veer from the norm, just pick them up and tell them to try again. It’s ok. They’ll be fine. They’ve got this.

The third assistant coach on the eighth grade Monroe Lions is a beautiful example of life coming full circle. It’s someone who has adored and encouraged James since the beginning, when James kicked his first soccer ball — someone who set in motion James’ athletic life with love, patience and a little hope … Mark Hope.

I am indebted to and forever grateful to the Monroe Lions Football organization for their amazing display of inclusion of my son James. Not all superheroes wear a cape.