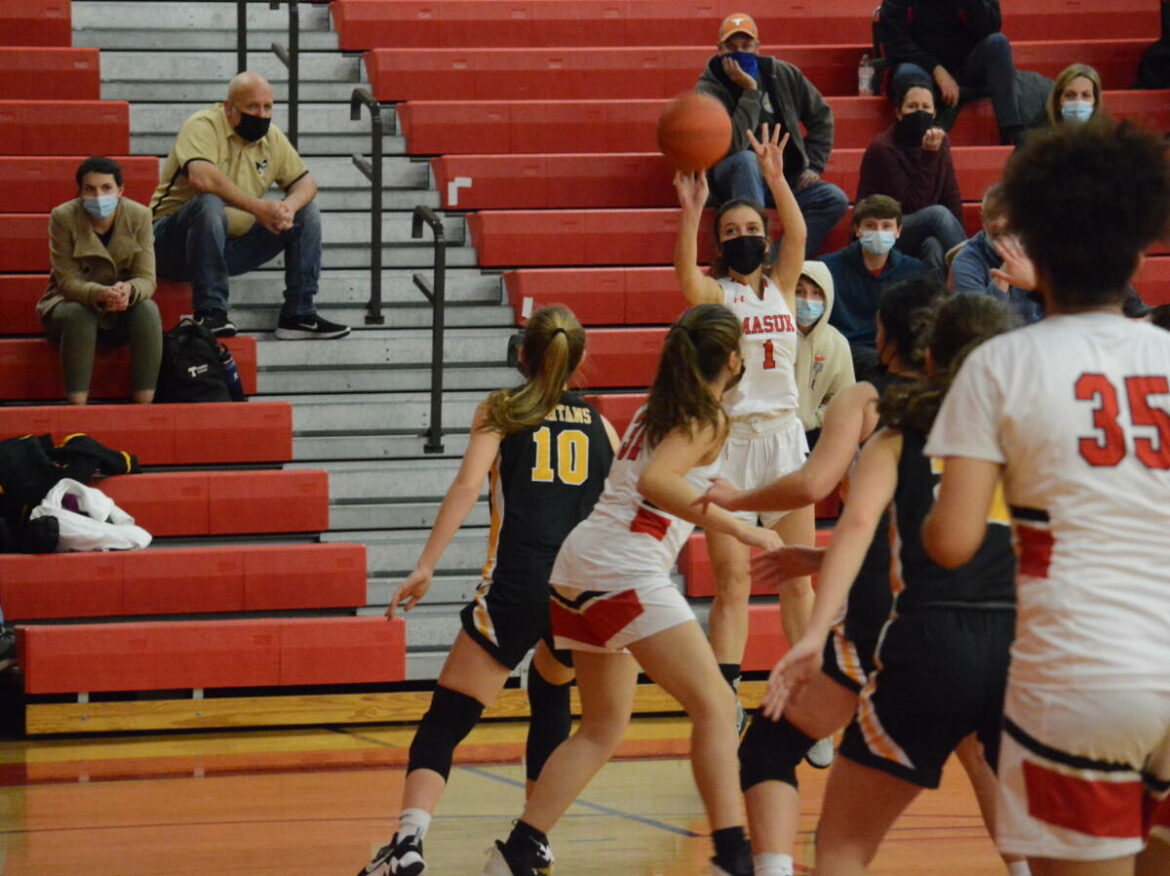 Alannah Tremalio takes a shot for the Panthers in a game against Amity.

MONROE, CT — There has been no shortage of effort and some early-season success for Masuk High’s girls’ basketball team. The Panthers, after winning their first three contests, have dropped two games — including a down-to-the wire 36-33 setback to visiting Amity in the first round of the Masuk Holiday Tournament on Dec. 27.

“Definitely very happy. We’re working very hard every game and every practice,” Masuk Coach Scott Corchard said. “We’re focused on them getting better and pushing each other every single game.” 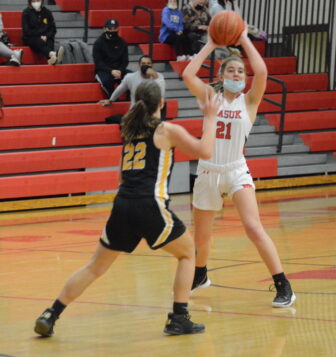 Hannah Fagan looks to pass the ball for Masuk in a home game against Amity.

The Amity game featured the return of Masuk alum Michelle (Martinik) Shoop, whose name is on the All State banners hanging in the gymnasium.

Knotted at 13-13 apiece at halftime, the game went in Masuk’s favor in the third quarter. Maia Ventresca and Alannah Tremalio both nailed 3-pointers in the stanza, helping the Panthers seize a 23-19 lead heading to the fourth quarter.

The Spartans went on a 5-0 run to start the fourth and claim the lead. After a Masuk free throw tied things, Natalie Lieto’s steal and layup gave the Panthers a 26-24 lead with 5:44 to play. Lieto’s mid-range jumper broke another tie, making it 28-26 Masuk with 4:32 left.

After an Amity 3-pointer gave the Spartans the lead, Masuk’s Hannah Fagan evened the score at 29 apiece with a foul shot. Amity answered with another 3-pointer for a 32-29 advantage, then added to the lead, making it 34-29 with 3:08 left.

Down 35-31 with time beginning to work against the Panthers, Fagan pulled the hosts to within four with 1:30 left. Fagan made one of two free throw attempts on separate trips to the line, making the score 35-33 Amity with less than a minute left. The Spartans missed some free throws late, leaving the door open for the Panthers, but Masuk couldn’t get off a last-second 3-point attempt. 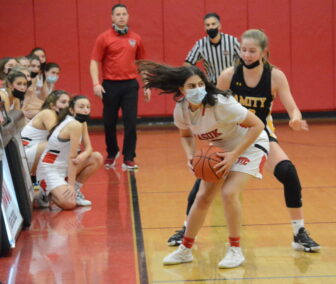 Jenna Smith fights to keep possession for Masuk as the Panthers battle Amity.

The Panthers fell 50-37 to Immaculate on Dec. 20. Ventresca led the Panthers with a dozen points, Fagan scored 11 and Bodden added six.

Masuk will play in a tourney consolation game against Bethel on Dec. 29, then resume game play after the calendar turns as Brookfield comes to town Wednesday, Jan. 5 at 7 p.m. After that comes a rematch with Bethel, also at Masuk, Friday, Jan. 7, in another 7 o’clock tilt.