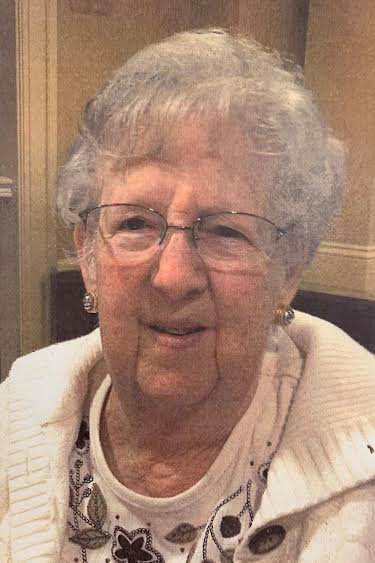 Gertrude Rieber, longtime resident of Monroe, passed away on  February 5, 2022. She was 102 years young.

Born in Brooklyn, N.Y., she was the daughter of Leonard and Theresa Schaffer. She graduated high school and was employed by Royal Insurance and Immaculate Conception Monastery in Jamaica, NY, where she worked as a secretary. Through a mutual friend she met her husband of 42 years Edmund “Eddie” Rieber. They bought their first home in Queens Village, where they brought up their 2 children and lived until they retired.

Once retired she and her husband moved to Monroe to be near her daughter and granddaughters. She made many long lasting friends within her neighborhood at Hidden Knolls and quickly became involved within the community. She was a member of Saint Jude’s Church in Monroe and enjoyed attending services and the many events and festivals they put on.

She was also a member of The Monroe Senior Center, where she enjoyed traveling, playing bingo, participating in luncheons and the knit and crochet club. She was known to have an occasional drink of scotch with one ice cube, so it wouldn’t get watered down. Her true enjoyment was spending time with her family.

Friends are invited to a visitation on Sunday February 13th from 1:00 to 4:00PM at  Spadaccino & Leo P. Gallagher & Son Community Funeral Home, 315 Monroe Turnpike, Monroe, CT 06468. Funeral Mass to be celebrated  at St Jude’s Catholic Church on Monday February 14th at 11:00AM. Internment to follow at St. John’s Cemetery.

In lieu of flowers, please consider making a memorial donation to the American Cancer Society or the PKD Foundation.