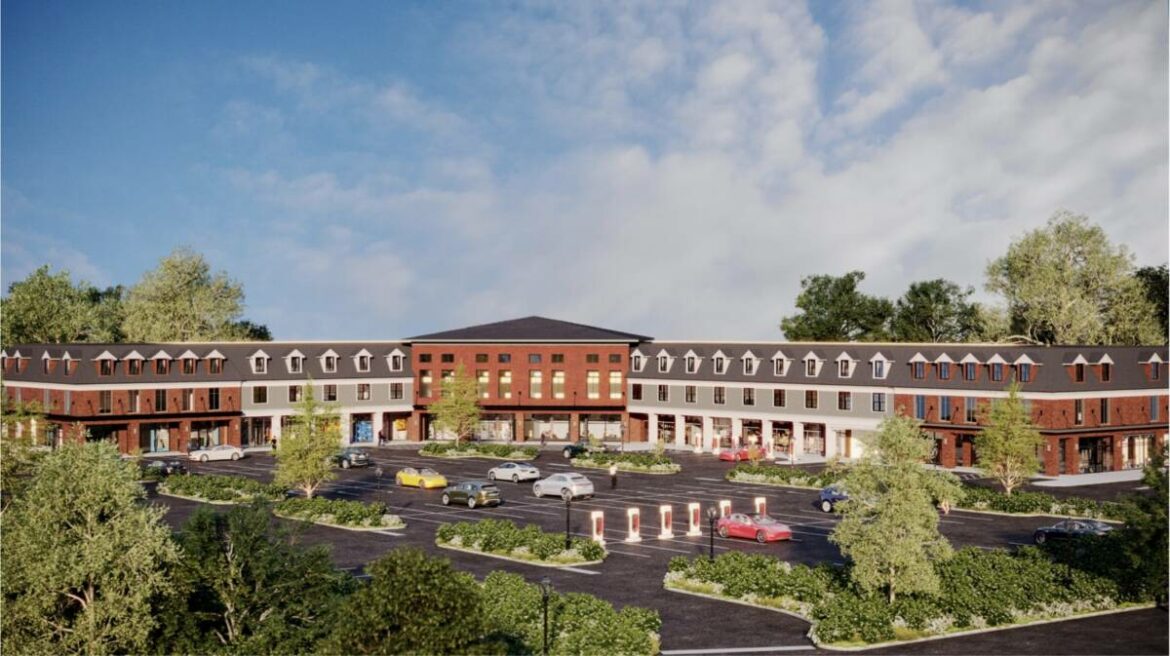 MONROE, CT — Gateway Commons, a mixed use development with retail, office and storage uses, along with 57 units of housing, is being proposed on just over seven acres at the Monroe and Trumbull border on Main Street (Route 25). The developer is seeking land use approvals from commissions in both towns.

During last Thursday’s Monroe Planning and Zoning Commission hearing, Chris Russo, the attorney for the applicant, recalled the long process to get to this point, including work with staff of Monroe and Trumbull on a new overlay district needed to make the mixed use development a reality.

Extensive earthwork was done at 4 and 7180 Main St. to prepare the property for construction and allow a site plan to be presented. It now has the address of 7182 Main St.

“There’s been a lot of people involved to get to this point for a property that is very important, because it’s the gateway into Monroe,” Russo said. “It’s one of the reasons why it is called Gateway Commons.”

Ten percent of the residential units would meet the state definition of affordable housing, meeting requirements of Monroe and Trumbull regulations. Tenants’ income would have to be 80 percent of the median income of the area.

The housing would have a total of six affordable units with four in Trumbull and two in Monroe. 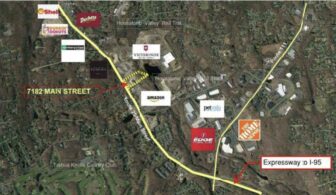 The architect is Amara Associates, a Middlebury firm.

Commercial uses would be on the ground floor with 20,000-square-feet of retail space (8,430 square feet in Monroe), 8,000 square feet for offices and a storage area.

The basement would have office space and a storage area accessed from the rear of the building, at a lower grade than the front of the building facing Main Street.

The plans show 10 commercial units ranging from 1,442 to 3,331 square feet, which could be adjusted depending on the needs of the tenant. Aside from retail, Russo said a restaurant is possible. 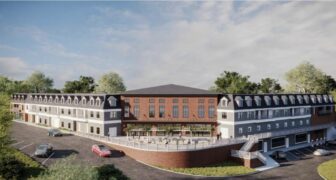 This computer rendering shows how the back of Gateway Commons would look.

The ground floor would have access to a lobby and an amenity area for residential use, toward the rear of the building, with an exercise room and a c0-working area.

On the second floor, the residential units in Monroe include two studio apartments, 17 one-bedroom units and two two-bedroom units.

Bicycle racks would be inside the building and Hans Schuurmans, of HJS Projects, said the applicant will try to grant public access to the bike trail that runs behind the property.

The building would be served by 198 shared parking spaces. The plan shows six charging stations for electric vehicles. Russo told the commission there is ample room for fire trucks and other emergency vehicles to move through the site.

The site would be served by two enclosed dumpsters.

Permission was received to hook into an existing sewer line. Approvals were granted by both the Bridgeport and Trumbull water pollution control authorities.

An environmental impact report from Steven Danzer found no significant impacts to the wetlands.

Russo said the Monroe Planning and Zoning Commission hearing will remain open until a wetlands decision is made.

The plan is also before the Trumbull Planning and Zoning Commission. 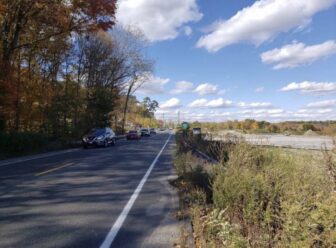 This photo shows where the driveway would be off Main Street, looking north.

The development would have a monument sign facing Main Street, a two-way entrance with a right-turn-only driveway onto Route 25.

Russo said his client wants to add a left turn bypass lane, similar to the one at Starbucks further up Main Street, to allow traffic to flow past cars waiting to turn left into the complex.

Steve Cipolla, a senior traffic engineer with Hardesty & Hanover, presented a traffic study. He said the new traffic generated by the development would not be enough for the Connecticut Department of Transportation to require a traffic signal at the entrance.

Hardesty & Hanover’s traffic study notes that the DOT is proposing traffic signal improvements at the Main Street intersections with Victoria Drive, Spring Hill Road and Tashua Road, which includes installation of video detection at all intersections, and minor timing changes at the Victoria Drive intersection.

These improvements are expected to be completed by fall 2023.

Cipolla said the mixed-use development would bring 84 total new trips in the morning, 157 in the afternoon and 130 on Saturdays.

Recommended improvements include a “minor fine tuning of traffic signal timing plans splits and an increase in cycle length by 2.2 seconds to mitigate the impacts at the signalized intersections of Main Street at Spring Hill Road and at Tashua Road during the weekday afternoon peak hour.” 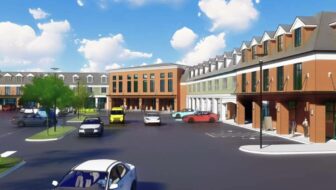 The analysis projects three school aged children would live in the Monroe units.

The hearing was continued to Feb. 3. Among the questions commissioners want answers to is where bus stops would be located.

After factoring property taxes and costs for education, police and fire coverage, a net revenue of $113,961 per year is estimated for the town.

Russo said the application meets all of the general standards for special exception permits and the building’s height and size, as well as the use of the property, is appropriate for the B-1 zone, it meets parking requirements and the lighting plan is Dark Sky complaint.

He also noted the property identified as mixed-use commercial/residential on page five of the Monroe Plan of Conservation and Development.

“We also added a significant amount of landscaping to the site to help buffer the building and the use,” Russo said. “I think our impact study clearly shows that this will not put a burden on the town. In fact, it will be able to benefit.”