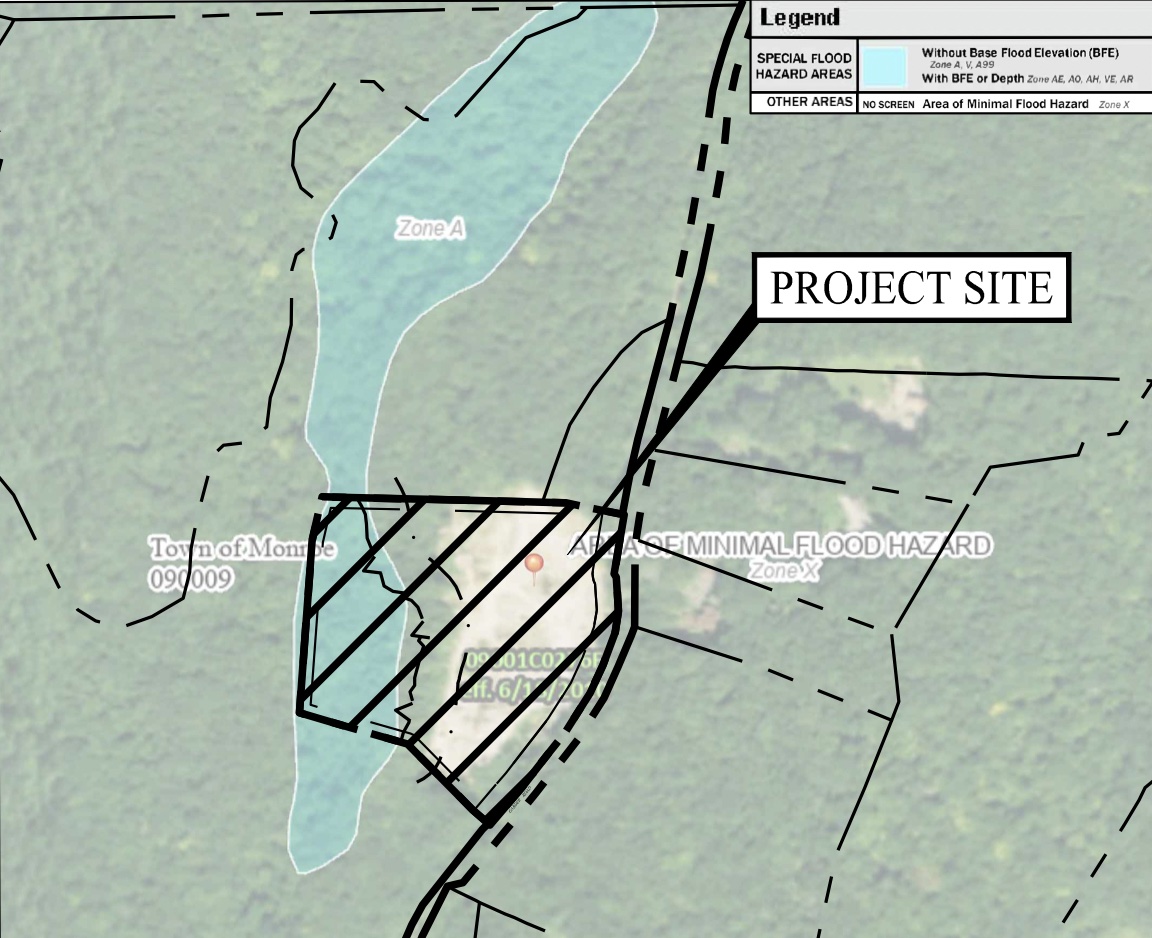 A developer wants an excavation and filling permit to prepare 125 Garder Road for the construction of two industrial buildings.

MONROE, CT — A developer plans to do earthwork to level a 9.5 acre property at 125 Garder Road to prepare it for construction of two industrial buildings. The proposal includes blasting, rock crushing and bringing in a scale to weigh trucks carrying fill materials.

During a Planning and Zoning Commission hearing Thursday night, commissioners expressed concern that the property could become a quarry. An excavation and fill permit was approved for a previous owner in 2004 for conceptual plans for a building that never came, resulting in litigation.

The property was bought by 125 Garder Road LLC over two years ago. Robert Pryor, a professional engineer with Solli Engineering, represented the applicant at Thursday’s hearing.

“He continued to do work there, but didn’t get the proper permits,” Pryor said of his client, Joe Grasso. “We’re here to move forward and do what we need to do to get him on the right track in getting the permits he needs.”

Pryor said the earthwork operation will not be a quarry because the owner will sell some of the aggregate to a client, rather than on the open market, and will use some of it on his other properties.

Pryor said his client also has a pending wetlands permit application before the Inland Wetlands Commission, because close to 2.6 acres of the site are wetlands. He told the Planning and Zoning Commission he wanted to gather their input and continue the hearing, so they can address their concerns at the next meeting.

Pryor and Chris Pawlowski, a civil engineer with Solli Engineering, presented drainage, sedimentation and erosion control plans. Pryor said a substantial buffer remains in place around the area of disturbance, adding his client plans to increase the landscaping buffer.

The applicant wants to establish a future building elevation pad to an elevation of about 422 feet to support future site development with main access from Garder Road, close to the north end of Pepper Street.

The land has areas with elevations as high as 435 and 470 feet. The lowest area is about 408 feet. The wetlands are in back of the property.

Leon Ambrosey, a commissioner, asked if the applicant plans to bring in fill. Pawlowski said nothing would be brought it, but the developer plans to export about 100,000 cubic yards.

“Explain to me the whole truck scale thing,” Vice Chairman Bruno Maini asked. “If you’re not selling anything … why weigh it?”

Pryor said Joe Grasso, the principal of the LLC, has to know the tonnage for a customer he’s bringing fill to.

Ambrosey said the commission is trying to stay away from quarrying and asked how much material was removed from this property since Grasso took over. “We had an issue with that property a long time ago and got a lot of complaints about activity there,” he said.

Grasso, who attended the meeting remotely, said about 5,000 yards of material was removed.

Pawlowski said the applicant is seeking a five-year excavation and fill permit, though they do not expect the work to take that long. He said the majority of the property will require blasting.

“I think we, as a commission, have to look at five years of potential crushing and blasting,” said Robert Westlund, a commissioner.

Westlund asked if there has been any blasting to date, and Pryor said the terrain of the property shows evidence that there was blasting that predated his client.

“It seems to me it’s a functioning quarry,” Westlund said. “It’s clearly a quarry at this point and we have to consider that in deliberations.”

“Rock crushing and blasting on a property that’s already been mined, how is this not a quarry?” Secretary Ryan Condon asked.

“It’s not a quarry,” Pawlowski replied. “This is being prepared for construction. We’re not selling it on the open market. The goal is to develop this property in the near future.”

“But this material is being sold to somebody. It’s getting weighed,” Condon said.

“The problem I have is these are conceptual buildings,” Ambrosey said. “When it comes to these conceptual plans to put a building there, it doesn’t mean a building is coming there. We did that before and the building never came.”

Pawlowski said his client will know about potential suiters to construct buildings on the site within a year or two. “This is a concept we put together to show what kind of a plan could come before you,” he said.

“It’s just coming up with some assurance that once it gets to the level we want it at, it stays there,” Condon said of the earthwork.

“I think we’re in agreement,” Pryor said. “Any form of reporting to make the commission more comfortable about what’s going on out there, we’re willing to do. We would like to get this project and site on the right track as best we can.”

Pryor said they could produce monthly reports on materials leaving the site.

Ambrosey said using a scale can basically turn the site into a quarry again. “We had discussions with our client on the possibility of moving the scale,” Pawlowski said.

“The scale alone tells me it’s gonna be a quarry,” Maini said. “I don’t care what you say. It’s a quarry. You’re just using different words. There is no way for us to tell if you’re selling or not. You can bring in monthly reports, but we don’t know.”

“All right, we’ll take the scale out,” Pryor said. “Are you happy?”

“Even if we say no scale, he could weigh it on his property less than a mile away,” Nicole Lupo, a commission alternate, said of Grasso.

“My fear is the blasting and the amount you will have to do,” Maini said. “How much are you going to affect the wetlands up the road a bit? That’s a big fear of mine.”

Ambrosey said noise from blasting could impact residents living on nearby Bart Road, adding he would want to know the hours of blasting.

Bruno said his concern is not the noise, but how far the reverberation from blasts affects homes.

“How much blasting is going to be done?” Ambrosey asked, “and are we going to do a blasting study to see if neighbors will be impacted?”

Pawlowski said he believes that is already a requirement, that a pre-blast survey is done through the Fire Marshal’s Office.

Ambrosey said his problem with a blasting permit being issued by the Fire Marshal’s Office is it would be without Planning and Zoning Commission input.

“We have no control over the blasting and how much is done,” Ambrosey said. “You’re going to have to come up with a plan to take to this commission … I don’t want it to turn into a five year crushing application to move 100,000 yards.”

“We understand the sensitivity to it,” Pryor said, adding the commission could request a blasting plan as a condition of approval.

Pawlowski said they are willing to put in a higher berm along the road to further muffle the noise of the crushing.

Pawlowski said his client has dust control sprinklers and a 3,000 gallon water truck on site for dust. “We’re here to work with you guys,” he said.

Grasso’s company, Grasso Companies, LLC, is the contractor for the Pepper Street reconstruction project. He said Town Engineer Scott Schatzlein gave them permission to use the property at 125 Garder Road as a staging area for the project, a place to store materials and equipment.

But Town Planner Rick Schultz said the Planning and Zoning Commission is the appropriate party to grant permission from the town, not the town engineer. Chairman Michael O’Reilly asked Schultz to look into whether the town engineer gave Grasso permission.

Grasso said Schatzlein said he could do it during the reconstruction meetings between Grasso Companies and the town.