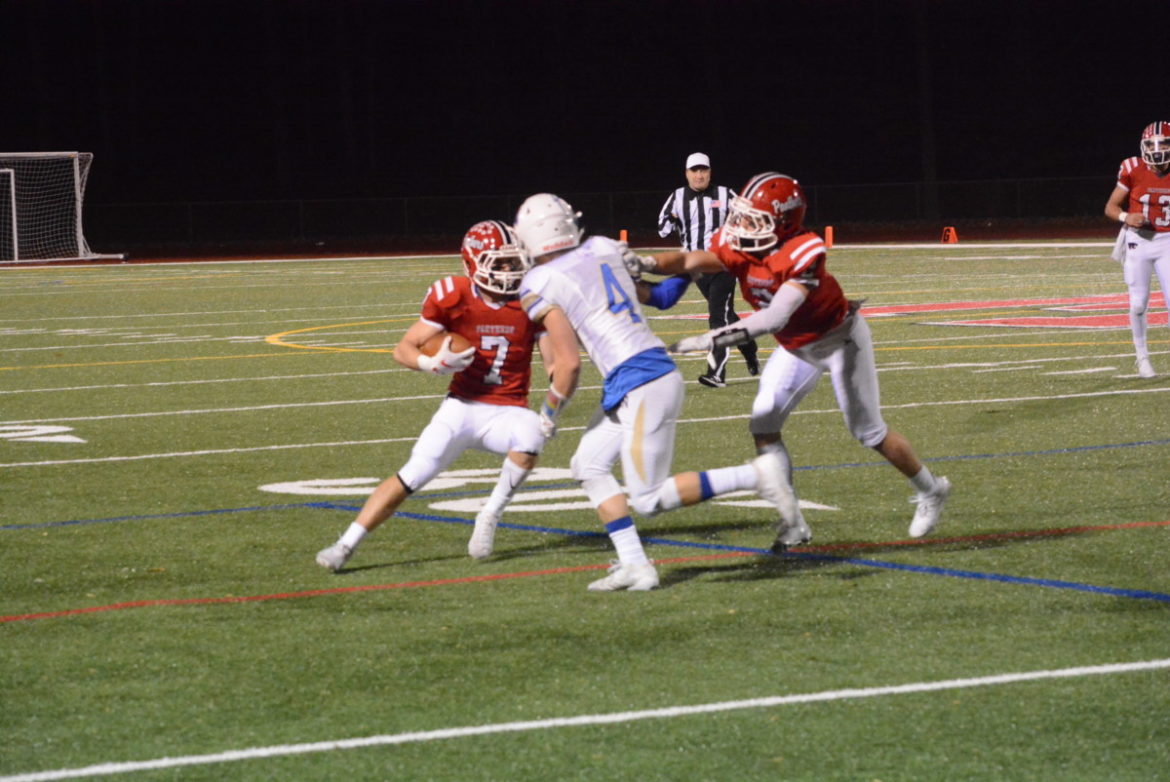 Jeffrey Nugent tries to pick up yardage for the Panthers in a defensive battle with Newtown.

Thanksgiving games are always big ones on the schedule and this year’s Masuk-Newtown High Turkey Day Eve clash had more on the line than just gobbling up bragging rights.

The Panthers came into this regular-season ending contest in need of a win to qualify for the Class L state playoffs. Newtown, meanwhile, entered into the battle unbeaten and looking to lock up a first round Class LL state playoff opening contest at home.

Masuk’s defense kept it in the game throughout – it was scoreless at halftime – but the Nighthawks pulled away late for a 17-2 victory. 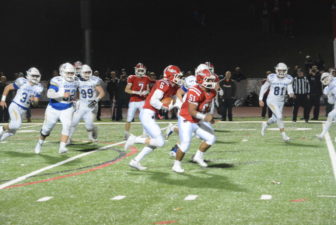 Newtown finished 10-0 and secured not only a first-round state playoff home game but also the top seed in the bracket. The Panthers finished at a deceptive 6-4 considering how close some of their losses were.

A touchdown run by Luke Hannan broke the ice in the third quarter. Masuk’s Colin Meropoulos got the Panthers on the board with a quarterback sack in the end zone for a safety, making the score 7-2 heading to the fourth.

Devin O’Connell’s 21-yard field goal made it 10-2. The Panthers were still within a TD and two-point conversion with possession late in the game when a Will Swierbut interception gave the ball back to Newtown at the Masuk 31 with 3:41 left. Jared Dunn’s two-yard leap for a TD made it a two-possession game with just 1:25 to go.

Masuk quarterback Nick Saccu departed with an injury late in the third quarter. Receiver Jeffrey Nugent and receiver/QB Deric De Angelis took snaps but could not help the Panthers break the ice on offense.

Both teams had their lowest point totals of the season thanks to stellar defensive play. Masuk’s Christopher Tillotson, a threat on both sides of the ball from his wide receiver and defensive back positions, came up with an interception to thwart a Newtown drive late in the opening half.

Newtown’s defense was also up to the task. This low-scoring clash came as a bit of a surprise given Nighthawks had registered 35 or more points in seven games and the Panthers tallied 36 or more in seven of their contests.

“Their offense scores a lot of points. They’ve got some talented players over there,” Newtown Coach Bobby Pattison said of the Panthers.

The Panthers were competitive all season long, including a one-point loss to Windsor and a wild battle against nine-win Weston, which ended in a 62-41 defeat for the Panthers.

“Totally love this team, totally love these kids. They gave us everything they had,” Masuk Coach Joe Lato said. “They’re amazing kids. Any average team would have folded after the Weston game.”

“It was a game of inches all year,” Lato said.