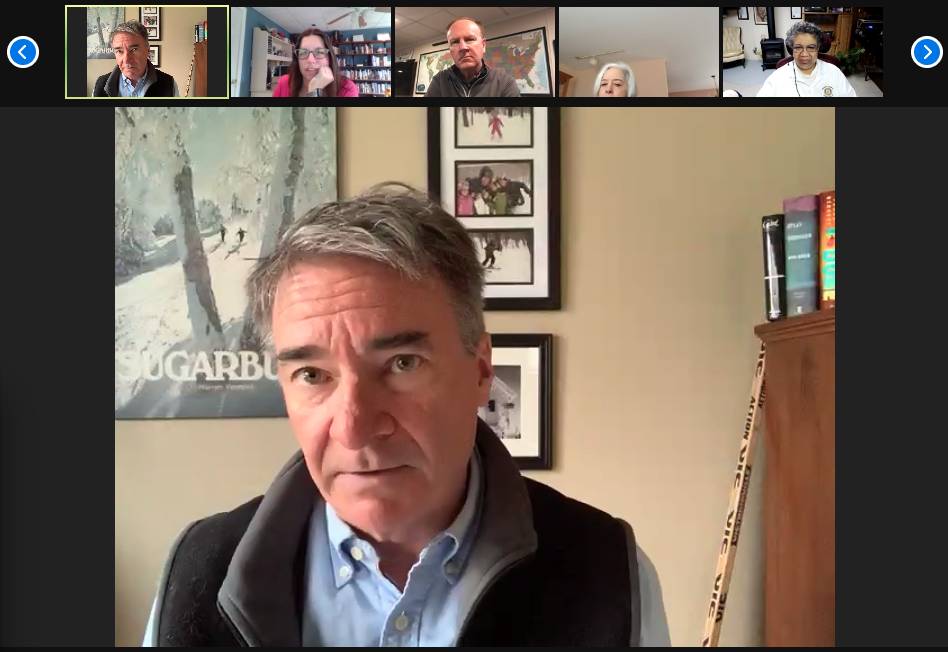 When introducing himself as a candidate to represent Monroe and portions of Newtown, Furrier went right to his biggest issue: fully reopening the state. Furrier expressed his belief that Connecticut and other states allowed executive overreach, resulting in lockdowns that “just had a terrible effect on so many things.”

Gov. Ned Lamont, a Democrat, issued a flurry of executive orders meant to control the outbreak during the state of emergency caused by the COVID-19 pandemic. But Furrier said he believes that encroached on the legislative branch, which “needs to fight for its Constitutional turf.”

“I think there are definitely a lot of people who agree with that in Connecticut,” he said. “Separation of powers is the basic premise of our government.”

Furrier said the executive branch overriding the legislative and judicial branches is not fair, does not build trust, does not create goodwill and is not beneficial to everybody.

“That’s where I roll. I’m kind of a Constitutionalist,” he said. “I believe that people need to have their rights protected by a government that is restrained — that has their power limited so it doesn’t overreach.”

On a local level, Furrier said there are only narrow differences between Republicans and Democrats, because “we’re neighbors spending our own money.” Politically, he said “it gets strange when you’re not local and you’re spending other people’s money.”

Dennis Condon, a Rotary Club member, asked Furrier what he wants to achieve in Hartford.

“I want to be a voice in Hartford to open the state completely, especially the schools,” Furrier said. “I think kids need to be back in school 100 percent. I know we’re working on these things, but I just think that there needs to be more voices pushing it harder. That’s my number one thing.”

Furrier also said he would push harder for the legislative branch to be more assertive in defending its Constitutional turf to promote a separation of powers.

On other issues, Furrier said he would try to get as much revenue for the district as he could, and that he wants the state to be fiscally solvent.

“It’s not healthy now,” Furrier said. “I like what I’m hearing from the governor with respect to trying to get Connecticut back on its feet again.”

Steve Vavrek, a Rotary Club member and a former first selectman in Monroe, asked Furrier about his background in local government.

Shortly after moving to Newtown in 1997, Furrier joined the Republican Town Committee and was appointed to serve on the Public Building & Site Commission, on which he was chairman for a time.

Furrier said he was only on the RTC for a short period for a number of reasons.

He eventually joined the Independent Party of Newtown and won a seat on the Board of Selectmen, serving a two year term. Furrier ran for first selectman in 2011, but lost to Patricia Llodra, a Republican.

He has been out of politics, until deciding to run in the special election for the 112th District seat following Republican, J.P. Sredzinski’s resignation last month.

He asked Furrier what he would do about it.

Furrier said past politicians making promises for things they did not fund is unfair to future generations.

Furrier, a senior scientist at Unilever in Trumbull, recalled how his company changed its pension offering 15 to 20 years ago, allowing employees enrolled in the current plan to stay in, but capping it.

“Mine is capped. I look forward to getting it,” he said. “State employees are in a similar situation and they structured their retirement around getting their benefits. We have to do what we can to help them do that, and restructure where we can.”

Furrier was also asked his position on affordable housing.

He noted how difficult it is for a municipality to deny an affordable housing application and have its decision upheld in court when the developer appeals.

“You’re limited in what you can do … unless you can prove it poses health or safety issues,” Furrier said, “but how hard is that? That’s hard.”

When allowing affordable housing projects, Furrier said he prefers smaller ones over larger ones. The latter can be high density housing with apartments, which he said is problematic and “not necessarily Monroe’s or Newtown’s signature housing style.”