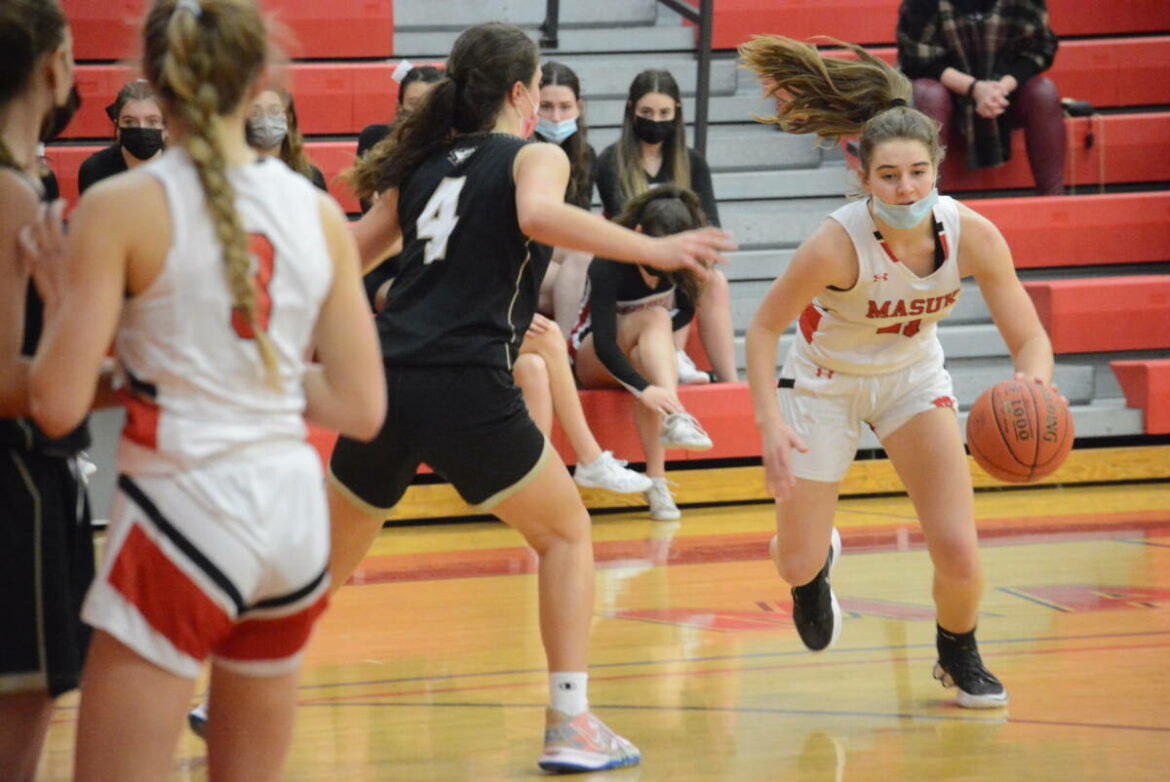 MONROE, CT — It was quite a comeback for the Masuk High girls’ basketball team on Thursday. The Panthers, trailing by a dozen early in the third quarter, chipped away and came back for a thrilling 44-38 victory over the visiting Joel Barlow Falcons.

“It was great. We’ve had a lot of games we’ve been in. To be in it and win one of these shows the heart of our team,” Masuk Coach Scott Corchard said.

Barlow led by 10 at the half and 26-14 in the third when Masuk got on track. A putback by Sofia Lieto pulled the Panthers to within five at 28-23 less than three minutes into the third. 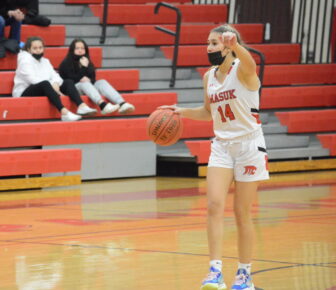 Natalie Lieto sets up the offense for Masuk during the Panthers’ win over Barlow Thursday.

The Falcons responded with back-to-back 3-pointers to seemingly reclaim control with a 34-23 lead only 45 seconds later.

Masuk finished the quarter on a 7-1 run as Alannah Tremalio canned a 3-pointer and added a basket following a forced turnover and Hannah Fagan added two points. It was 35-30 Barlow going to the fourth.

And it was pretty much all Masuk from that point on as the Panthers outscored the Falcons 14-3 in the final stanza, closing out on a 12-1 run.

Sam Dube hit a pair of foul shots and Natalie Lieto converted a 3-point play to bring the Panthers to within a point at 38-37. Natalie Lieto hit a 3-pointer for a 40-38 lead with three minutes to play.

The Panthers sealed the win at the foul line with some key front end one and one makes and hit 7 of 7 from the charity stripe in the last quarter.

Fagan made a nice save to prevent a backcourt violation leading to a pair of Maia Ventresca points at the foul line. 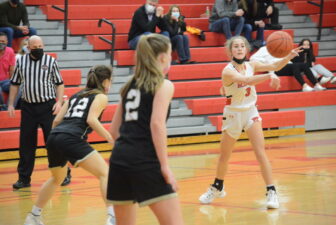 Sam Dube keeps the ball moving for the Panthers during Masuk’s 44-38 victory over Barlow Thursday.

“We made some clutch free throws toward the end and we never gave up,” Corchard said.

Fagan finished with 11 points, Sofia Lieto had nine, and Tremalio had eight. Ventresca had a third-quarter 3-pointer on her way to finishing with six points. Natalie Lieto also dropped in six and Dube added four.