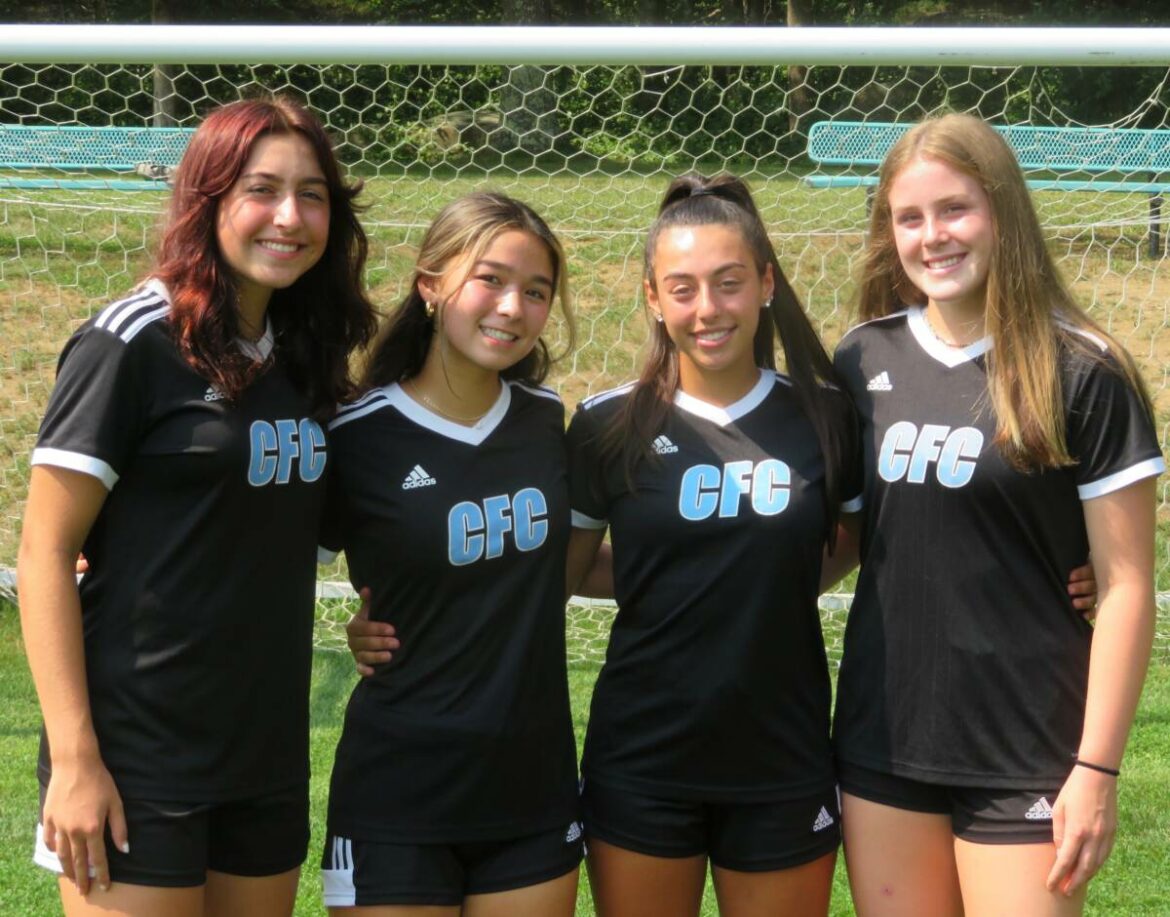 MONROE, CT — When the Connecticut Football Club’s Elite Clubs National League U16 girls soccer team battled for the National Cup in a tournament in Tampa Bay in early July it featured a roster with some of the best players in the state — and among its 11 starters, three hailed from Monroe.

“I think it’s cool how we played as little girls and are together again,” said Iannucci, who first started playing soccer with AYSO when she was age four.

Every year, talented athletes from all over Connecticut participate in tryouts in Bethany in hopes of making CFC teams. Brianna VanDerheyden, 14, of Monroe, played well enough to earn a spot on the U14 team.

“You can be creative on the field,” she said of soccer. “You can dribble. You can pass. You can’t really anticipate what you’re going to do until you have the ball.”

During an interview at Wolfe Park Wednesday, all four athletes said being part of a team is what they love most about soccer.

“The connections you build, it’s like a family bringing each other up when you do something good,” Iannucci said. “It’s nice to know someone always has your back and there’s always people supporting you.”

“It’s the friendships you build and the memories you have,” Sheehan said, adding, “it’s so much fun going to the tournaments.”

The friendships cross town borders, according to Reid, who said she enjoys interacting with other girls across the state. The CFC team attracts players from places like Milford, Stratford, Trumbull, Westport, Fairfield, West Hartford, Old Saybrook, Waterford and Tolland.

“We have more girls from Monroe than any other town,” Reid said of the U16 team.

“I think soccer lets you to bring out a different side of you,” Iannucci said. “It brings out who I am as a person. It’s a coping mechanism. You learn so many lessons when you’re playing that you use in life for other things.”

Off the field, Reid said student athletes have to learn to manage their time. “You have to figure out how to do your homework when you get home,” she said. “Sometimes you’re not home until 9. Then you have to shower and eat.”

U.S. Women’s Soccer gained popularity for its dominance in the Olympics and the World Cup over the years and Iannucci, Sheehan, Reid and VanDerheyden follow the big games.

“We all went to at least one U.S. Women’s game before when they were in the area,” said Sheehan.

Reid and Iannucci said Julie Ertz is their favorite player on the team, while Sheehan and VanDerheyden said they like Rose LaVelle.

Reid plays back and mid, Sheehan is mid, and Iannucci and VanDerheyden are forwards. All four have aspirations to play at the college level.

“I want to go down South,” said Iannucci. “My dream school is Clemsen. I want warm weather and it’s a different lifestyle,” she added of the South. “I want to see how people live there.”

After college, Iannucci said, “I want to go into business and finance and work at a hedge fund or something like that.”

Sheehan said she is now old enough to talk to college coaches, while participating in I.D. Clinics where players are recruited. She also has been visiting colleges.

“I’m definitely keeping my options open and trying out different things,” she said. “I want to be an engineer. I’m good at math.”

When Reid is a rising junior, she will be able to talk to college coaches. “I want to go to school in California, where my family is from,” she said, “Santa Barbara or one of the schools in California. I want to be a veterinarian. That’s why I go to the Vo Ag school in Trumbull.”

I.D. Clinics are camps and tournaments at schools giving an opportunity for high school athletes to showcase their talent to college coaches from some of the best schools in the nation.

“You play your game,” Iannucci said of tuning out the audience of coaches taking copious notes at the clinics.

“I was nervous at my first one in North Carolina,” Reid said. “But then I thought, ‘we’re all human,'” she added of not worrying about making mistakes.

All of the teens enjoy strong support from their parents, several of whom were star athletes growing up. Each player shared advice for younger girls who want to excel at soccer.

“I would just say, ‘work really hard,'” Reid said. “I feel like with anything you want to do competitively, there will always be girls who will work 10 times harder than you.”

“The process isn’t always going to be fun or easy, and there will be days when you want to quit,” Iannucci said. “But the end result will make you cherish the moments and sacrifices that you went through. Embrace even the worst days you went through. You’re just building your character as a player.”

“I would probably tell a little girl going into soccer there’s a lot of work behind the scenes you need to do to get to the top level,” VanDerheyden said of doing things on your own outside of practice, like running and eating right.

“Just enjoy it, because we’re not going to be playing soccer forever,” Sheehan said, “so have fun. Work hard and leave it all on the field.”