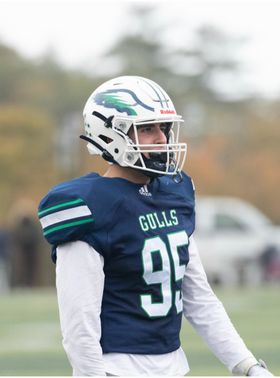 Former Masuk standout Colin Meropoulos is feasting on quarterbacks as a defensive lineman at Endicott College.

BEVERLY, Mass. — Colin Meropoulos is having quite a collegiate football career. Only a sophomore, the Endicott College defensive lineman, and former Masuk High standout, broke the school’s records for sacks in a single game, as well as a season, in his team’s most recent win.

In Endicott’s 19-17 win over the University of New England on Oct. 30, Meropoulos broke the single-game sacks record with 4.5 and set a new season mark for the Gulls with 11.5.

Meropolous finished the game with eight tackles (five solo); those 4.5 sacks for 31 yards, and 4.5 tackles for a loss totaling 34 yards. His last sack came on the last play of the game, a 16-yarder to punctuate the win for the Gulls.

He said breaking records as a sophomore with a couple seasons of college football ahead is “surreal,” adding this success is also a testament to his coaches and teammates.

“I wouldn’t be able to do it without my teammates beside me who make it possible for me to make the plays,” Meropoulos said.

The Monroe native was named to the D3football.com Team of the Week in early November.

The Team of the Week, presented by Scoutware, is D3football.com’s weekly honor roll, which is currently in its 23rd season of recognizing the top performance at each position from the previous week. Student-athletes are nominated by their school’s sports information directors.

Meropoulos was one of 26 student-athletes chosen to the D3football.com’s weekly honor roll from all NCAA Division III programs across the country.

Overall, Meropoulos is the seventh Endicott student-athlete in program history to be chosen to the D3football.com Team of the Week and ninth overall selection (two student-athletes with two honors each).

Additionally, Meropoulos is only the third defensive lineman ever to be chosen to the squad.

Endicott has one game remaining in the regular season. Coming off a bye week, the Gulls visit Nichols this Saturday, Nov. 13, at 12 p.m. A victory would be significant. Endicott is looking to win the Commonwealth Coast Conference season championship which would give the Gulls an automatic bid in the NCAA Division III playoffs.