The Monroe Strings Ensemble performed twice during a private international trip to Germany this spring.

MONROE, CT — Lisa Homann and the families of 22 of her music students were determined not to allow COVID-19 to interfere with their international trip to Germany this spring. Though Masuk High School could not sponsor it during a pandemic, the group planned a private trip to Homann’s homeland.

Homann is the director of Masuk’s Orchestra, but she and students making the trip performed as the Monroe Strings Ensemble, while overseas.

Homann grew up in Mainz, which is in Frankfurt. The trip also included stops in Munich, Rosenheim and Heidelberg.

The Monroe group took a gondola to the top of Kampenwand, a mountain in Bavaria which is part of the Alps. “We had lunch at this cabin, it was amazing,” Homann recalled.

A solemn visit was made to Dachau, the site of an infamous concentration camp during World War II, where countless thousands of Jews died from malnutrition, disease and overwork or were executed.

“It’s part of our culture too. It had a big effect on Germany and the way we are,” Homann said. “We had an audio tour there. Some stayed for all of it and, for some, it was too much.”

“I have a special connection there and they met a lot of people through that,” Homann said of Germany. “I got to take them places that are not as common for tourists.”

Homann’s parents, Klaus, 91, and Brigette Ewe, 92, and sister Dorothy Ewe, a high school teacher, are among her family members who still live in Germany. Homann visits her homeland five-to-six weeks every summer.

“The whole thing was difficult to plan,” she said of the trip. “Everything was closed and overbooked because of COVID. We had a concert in The Brick Museum.” 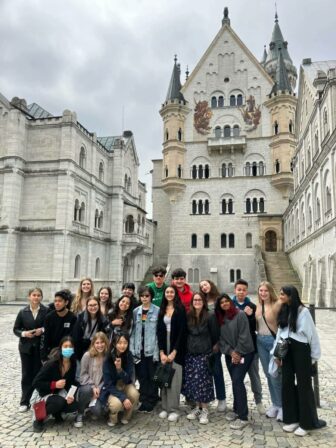 Homann’s father runs The Brick Museum, which he started with his huge collection of bricks. “He has bricks from Roman times,” she said.

The students also performed at an old town hall in Bavaria with another youth orchestra located there. “The conductor is a colleague of my sister,” Homann said.

The Monroe Strings Ensemble played some pieces, the German band played, then everyone played together.

The groups had also performed together in 2016, with the German group coming to Monroe in the fall and the Monroe group going there in the spring.

Homann has been playing music since age seven, with encouragement from her parents, who met while playing in an orchestra together in college. In 1992, she emigrated to the U.S. to study the violin at the College Conservatory of Music, in Cincinnati, Ohio.

She met her future husband, Oliver, who plays the oboe. After earning her Master’s degree, she followed him to the East Coast, so he could pursue his Master’s at Yale.

Oliver, who teaches at the ACES Educational Center for the Arts in New Haven, and Homann are professional musicians who have performed in several orchestras, including the New Haven, New Britain and Hartford symphony orchestras.

The couple lives in New Haven and has two daughters.

Homann taught at two elementary schools in Chesire, before becoming certified and applying for a part-time job as a strings teacher at Chalk Hill Middle School in Monroe in 1997. She now teaches strings for the entire district.

In 2000, Homann started the orchestra at Masuk with seven students — now there are 74.

“I stumbled into this,” she said. “There was no orchestra at Masuk. It didn’t exist. I started this whole thing.” 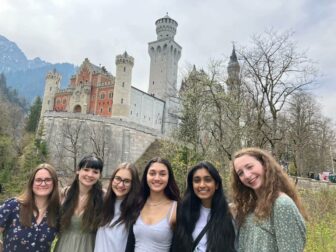 Homann tries to arrange an international trip for her students every three years. “In 2019 the whole music department went to Iceland,” she recalled.

As strings teacher for the entire district, most of Homann’s young musicians have grown up with her by the time they join the orchestra at Masuk. “I’m their second mom,” she said with a smile.

She said the group that went to Germany during spring break has wanted to go since the seventh grade.

“The experience, they say, was life changing … to experience a different culture and connect with people by performing together,” Homann said. “It was a great trip. We were very lucky with the weather. The rain held up to the very last day. It was always in the forecast.”

She said tour guides gave the teenagers an understanding of what’s out there beyond “this little town of Monroe.” “Everybody spoke English, so they could always talk to people,” Homann said.

Music was another useful mode of communication.

“Music is an amazing vehicle to connect to everybody,” Homann said. “It’s an international language.”

One thought on “For Monroe students visiting Germany, music is an international language”