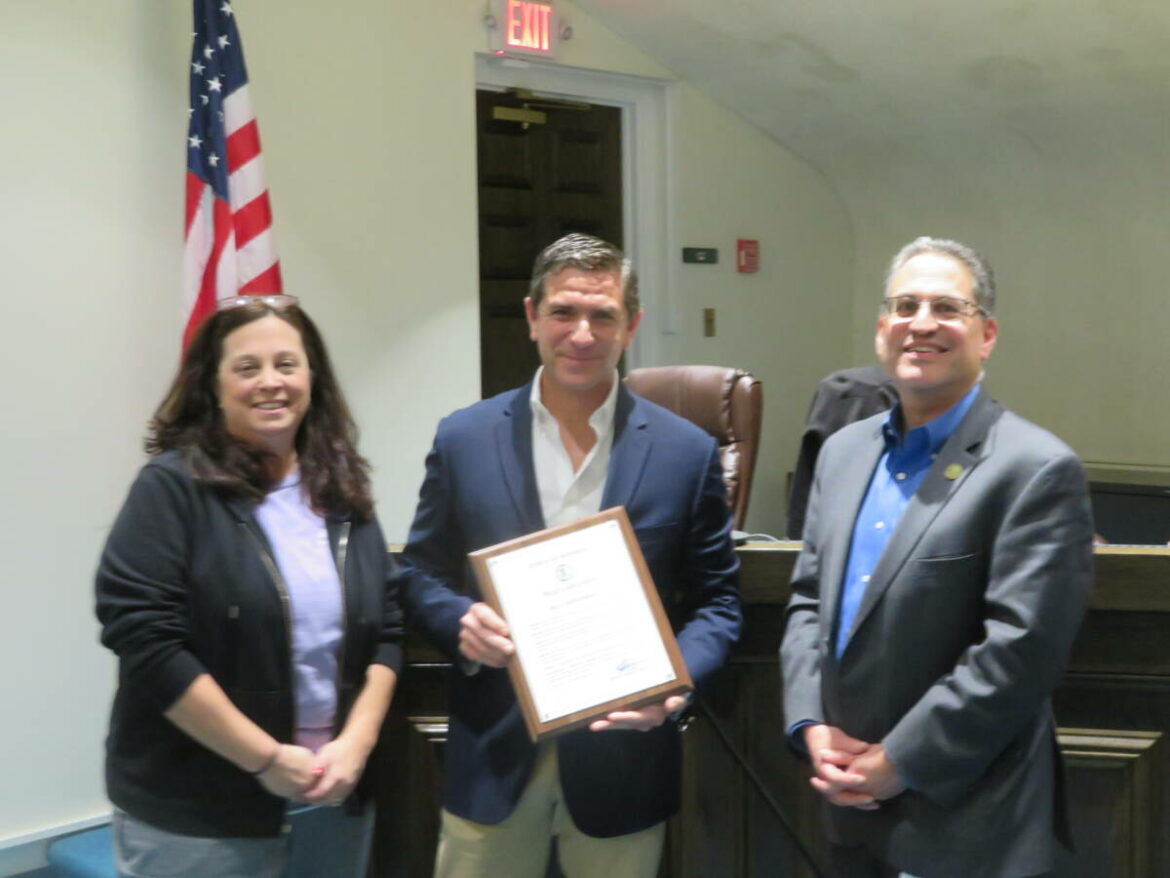 Rick Henderson, center, receives a proclamation from First Selectman Ken Kellogg, right, recognizing him for receiving the Connecticut Recreation and Parks Association's Volunteer of the Year award. Parks and Recreation Director Missy Orosz, left, nominated him for the award.

MONROE, CT — Rick Henderson is best known for his 16 years as president of Monroe Lions youth football, as well as his coaching in the successful program. But it was Henderson’s willingness to share his resources with preschool soccer players that led to his being honored as the Connecticut Recreation and Parks Association’s 2021 Volunteer of the Year.

Monroe Parks and Recreation’s preschool soccer program could no longer be held inside school buildings because of the COVID-19 pandemic, so Director Missy Orosz wanted to have it outside in the fall. The only problem was it got too dark to play on the field at Wolfe Park.

She turned to Henderson for help. 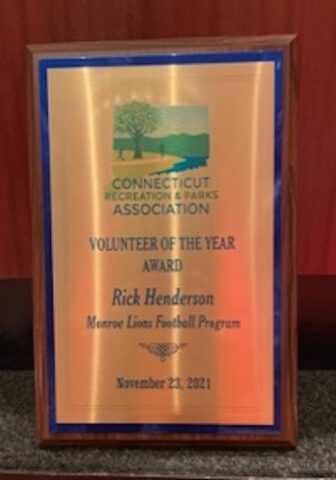 “He let us use the football lights, so kids ages three-to-four got to play through November,” she said. “He’s always been good to me, ever since I’ve been here.”

Moved by Henderson’s generosity, Orosz, a 15-year-member of CRPA, decided to nominate him for the Volunteer of the Year award. It was the first time she nominated someone for anything — and he won.

“When Missy called me, I was humbled and extremely honored,” Henderson recalled. “There are thousands of worthy individuals throughout Connecticut other than me.”

Henderson and his wife, Kim, have lived in Monroe for 17 years and have two children. Their daughter, Kylee, 15, is a freshman at Canterbury School in New Milford and their son, Cole, 12, played for the Lions’ sixth-grade team, which Henderson coached.

On Nov. 23, Henderson received his plaque during a CRPA luncheon at the Mohegan Sun Casino’s Expo & Convention Center. He was accompanied by his family, Orosz, First Selectman Ken Kellogg and Parks and Recreation Commission Chairman Jonathan Stone.

Then Kellogg presented Henderson with a proclamation from the town at the Town Council meeting on Monday night.

The first selectman recognized Henderson for his “outstanding contributions” to the Lions program, while maintaining a “standard of excellence” for the league and being “a respected mentor for his coaches and players.”

Kellogg also praised Henderson for fostering a strong partnership with the Monroe Parks and Recreation Department.

“I applaud Rick Henderson for his dedication and leadership, and service to our community,” Kellogg said.

A lifetime of football

Growing up in Philadelphia, Henderson played football from age 6 to 22, when he was a wide receiver at Kings College. Then he got into coaching when he was 23. He now runs into former players at restaurants who have grown up, are married and buying homes.

“I believe football teaches the best life lessons for adolescents,” he said. “Football’s been a part of my life ever since I put on a helmet.”

Though he has run the Monroe Lions youth football program for 16 years, Henderson is quick to point out that it’s about more than him.

“We have an incredible leadership team and amazing dedicated coaches, who volunteer hours and hours between August and November,” he said. “It takes a great deal of people like that to make an organization successful. It’s not just me.”

“I care about the organization deeply,” Henderson added. “The Monroe Lions is very close to my heart.”