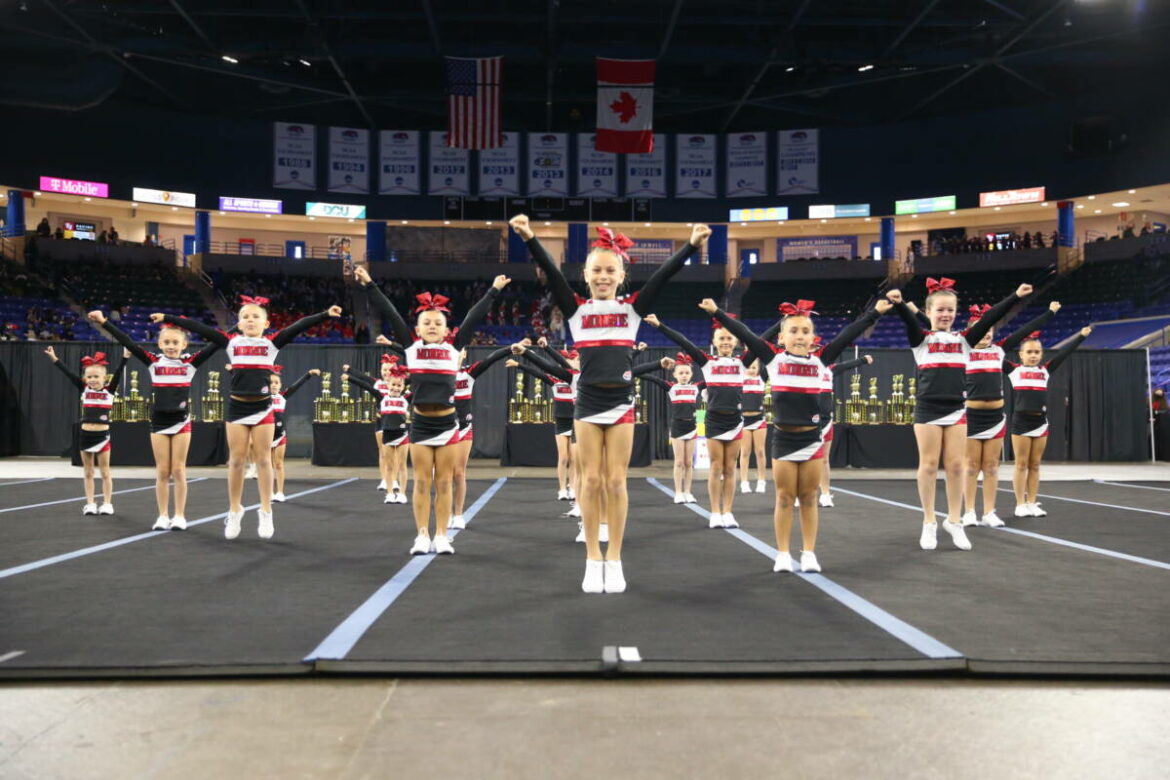 The Lions Mighty-Mites team has 21 girls on it. Here they perform their routine together. Midcoast Photo

MONROE, CT — When Lions Cheerleading Coach Felicia Anzalone’s girls arrived for a competition in New Haven on Oct. 9, it was the first taste of competitive cheer for the Mighty-Mites, who are ages 7 to 9.

“There were so many emotions,” Anzalone recalled. “They were nervous, scared, excited, and when they won, they realized all of their hard work had paid off. It was the moment they had worked all season for. They got a taste for winning, so when they got to the next practice they were ready to roll up their sleeves and get to work.”

The Mighty-Mites will compete on Dec. 6 and the Pee-Wees will perform on Dec. 8. 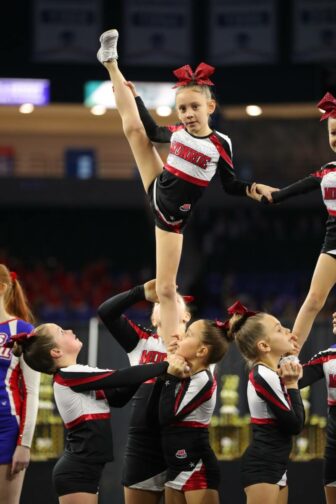 The Lions get into a pyramid. Midcoast Photo

Not only did the 21 girls on Anzalone’s team never compete before, roughly 50 percent never even cheered before. Of the those with experience, Anzalone said a quarter of them were Tiny-Mites, the youngest Lions cheer team for ages 5 and 6.

“As a whole, we basically started from scratch this year,” she said. “We taught them their motion, limited tumbling and stunting, as well as jumps.”

Among the challenges, the girls who were Tiny-Mites last year did not do stunts, because of the COVID-19 pandemic.

“Stunting is one of the focus points in cheerleading and that’s what we focused more of our attention on this season,” Anzalone said. “Those are your wow moments.”

She credits her coaching staff for teaching the girls the skills they would need to compete at a high level.

Anzalone started her coaching staff with two parents with girls on the team, Andrea Newbauer and Audra Santos. Then she reached out to Marissa Lumbard, who was a cheerleader with her at Masuk when the Panthers won the State Championship.

Helena Peck, who also does not have a daughter on the team, rounded out the coaching staff.

“Once they joined, I would say practices were a lot more effective,” Anzalone said. “We had a lot more hands to spot for groups.”

At level one, the cheerleaders hold the girl at the top at shoulder height. Level two is over their heads, Anzalone explained.

The girl at the top is called a flyer. The Lions have five flyers this year. “They jump into the girls’ hands, who are bases who lift them to the next level, and reach to the top,” Anzalone said.

“I’m taken aback by how far they have all come and when I ask them to do a new skill, they completely trust what I ask them to do without pushback,” she said. “They pick it up quick. They typically hit it on the second time they try it. I feel the whole team is going to be unstoppable.”

The coach praised the dedication of the girls and their parents.

“It was huge. We wouldn’t have made it as far as we did without them,” she said. “There are 21 girls on the team. Practices are mandatory. If one girl is missing, it affects the whole team — and these girls and parents have done an amazing job getting to practice all season.” 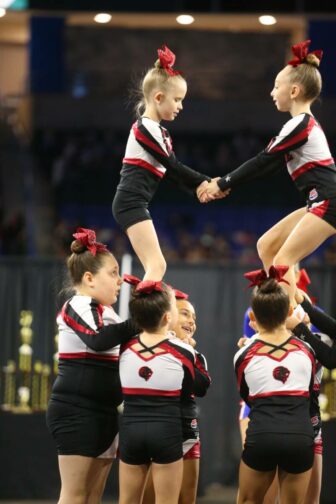 After taking first place in the States, the Lions traveled to the Field House in New Haven for the Locals on Oct. 23.

“There were two teams in their age group and they took first,” Anzalone said. “Winning at locals advanced us to the Regionals on Nov. 6.”

Representing Northern Connecticut in the Regionals in Lowell, Mass., the Lions came in second among six teams from Connecticut and several New England States. Their was high enough to earn an invitation to Orlando.

“The difference between first place and our place was 0.4. It was close,” Anzalone said. “We got a one point deduction and without that deduction we would have had first place. That was an eye opener for them. They got to see first hand how they can affect your placement.”

Anzalone said a bobble led to the lost point.

“When the flyer was in the air, she wasn’t as tight, it looked almost like the stunt would come down and they didn’t let it,” she said. “They fought to keep the hold. I was really proud of them for that. Watching them perform, I saw how there was no way they would let that stunt come down.”

Anzalone said cheerleading takes mental toughness. For instance, if a mistake is made early on in a routine, the girls cannot let it ruin their concentration the rest of the way.

Though it was the girls’ first time not finishing in first place, Anzalone said she and her coaching staff always tried to prepare them for it.

“I think by the way we coach at every practice, I remind them there could always be a team that’s tighter and cleaner,” she said. “They don’t walk into a competition knowing they’re the best there.” 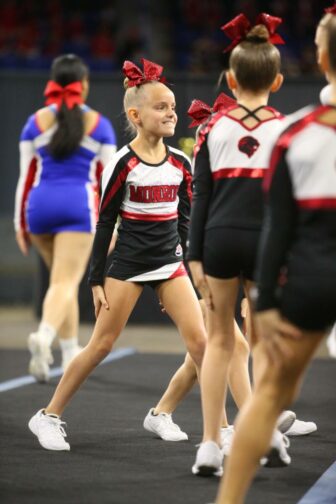 Aside from being competitive, the Lions coaches teach their girls sportsmanship. “No matter what happens, you’re always nice,” Anzalone said.

The Lions are a tight bunch. Teammates treat each other like sisters, resolving any conflicts amongst themselves.

Though recently, COVID-19 exposures have kept the Lions apart.

“We’ve gone through exposures and some of the girls have tested positive, so the Mighty-Mites and Pee-Wee teams have held practices via Zoom,” Anzalone said. “We’re hopeful everyone will be healthy by December.”

Next month, the Lions will bring all of the skills they learned over their first competitive season and a belief in themselves to Orlando.

“Belief is very big on our team, so we have them do the ‘I Believe’ chant’ before they take the mat at competitions,” Anzalone said. “‘I believe’ has become our saying this year.”

During the very first day of practice, Anzalone told the girls their families should start saving for Florida.

“I told them if you practice hard enough, and you try hard enough, you will go to Florida for Nationals,” she recalled. “It was a strong statement. I did tell them, no matter what happens on the floor at Regionals, we were proud of them for all of their accomplishments this year.” 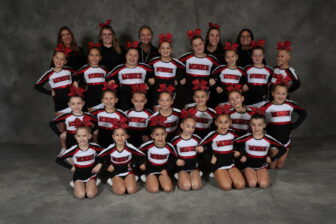 Anzalone said she is proud of how hard her girls worked this year.

“I do have to say these girls, they just continue to amaze me and they come to practice ready to work, so much that they ask for extra practices,” she said. “They really wanted it this year and that’s what they got. They really deserved their bid to Nationals.”