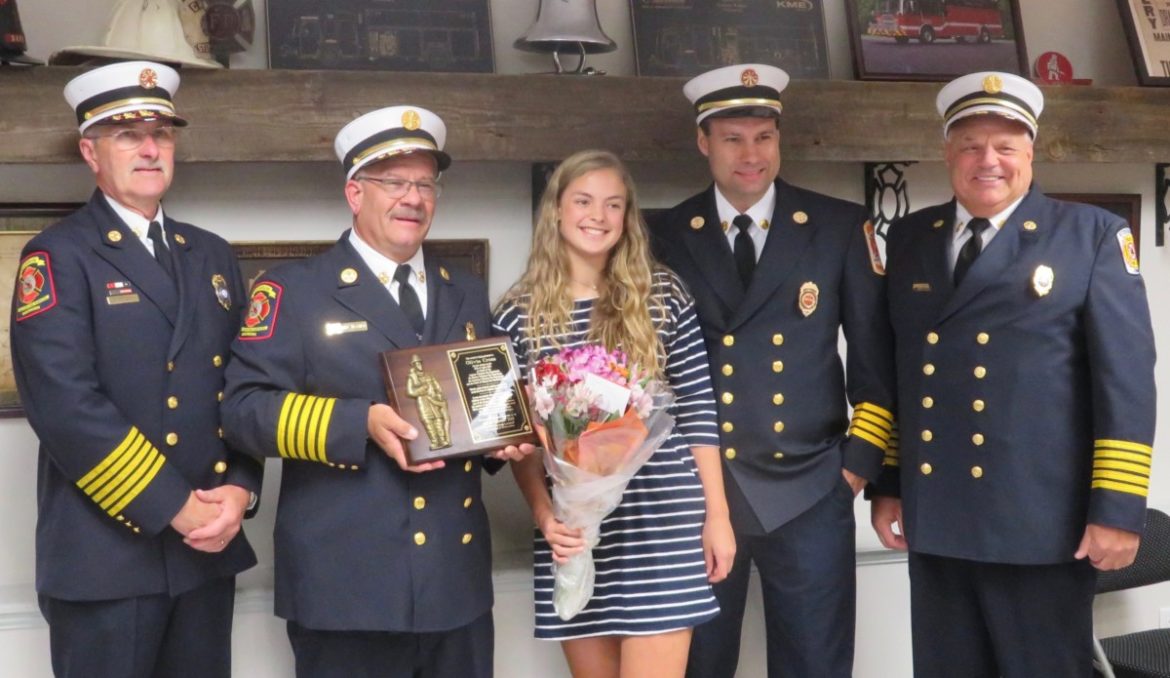 Firefighters honored Olivia Cross, a Masuk High School junior, during a ceremony at Stepney firehouse Tuesday night, for her heroics during a house fire in April, when she got two small children she was babysitting outside to safety.

Cross had just put the children, Maggie Bartling, 7, and her little brother Max, 5, to bed, when Cross went downstairs and smelled smoke.

Cross saw flames on the back porch from the kitchen window and quickly went back upstairs to get the children safely out of the house and call 911.

“I was on the phone with my boyfriend,” Cross, 16, recalled. “When I saw the fire, I was freaked out a little bit. I was definitely shaking a little bit when I was going upstairs, but once I got the kids outside, I felt more calm.”

Any nerves Cross may have felt were not obvious to those who know her best.

Monique Bartling, the children’s mother, credits Cross for displaying a calm demeanor and keeping her children distracted and calm throughout the ordeal. “She’s a very responsible person,” Bartling said. “Her mom told me she’s always calm under pressure.”

“She was perfect,” said Brett Bartling, the children’s father. “She was calm under pressure and was able to get her wits about her. She acted the way you would hope anyone would act.”

Maggie read a story she wrote about the incident, telling everyone how Cross got she and her brother outside and expressing happiness that her family’s cat also made it out of the house safely.

Firefighters, family and friends clapped after Maggie’s story and the little girl gave Cross a hug.

Klemish said Cross’s timely 911 call allowed firefighters to contain the blaze to the porch and back of the house before it spread any further.

Brett Bartling said his family is living in Redding and hopes extensive renovations and repairs at the house, in the area of Cutlers Farm Road, will be complete soon, so they can move back in during the holidays.

Dee Dee Martin, a Town Council member, who had taught Olivia and her sisters, Alison and Alexa, at the Gingerbread School at Monroe Congregational Church, said when she heard Olivia was being honored, she had to attend.

“I’m really proud of her,” Angela Cross said of her daughter Olivia. “I’m not really surprised, but it’s her nature to be cool and calm.”

“It’s so nice that they did all this for me,” Olivia said of Tuesday’s ceremony. “I didn’t expect anything. I was just doing what anyone should do in that situation. It’s basically what I was taught by my parents.”