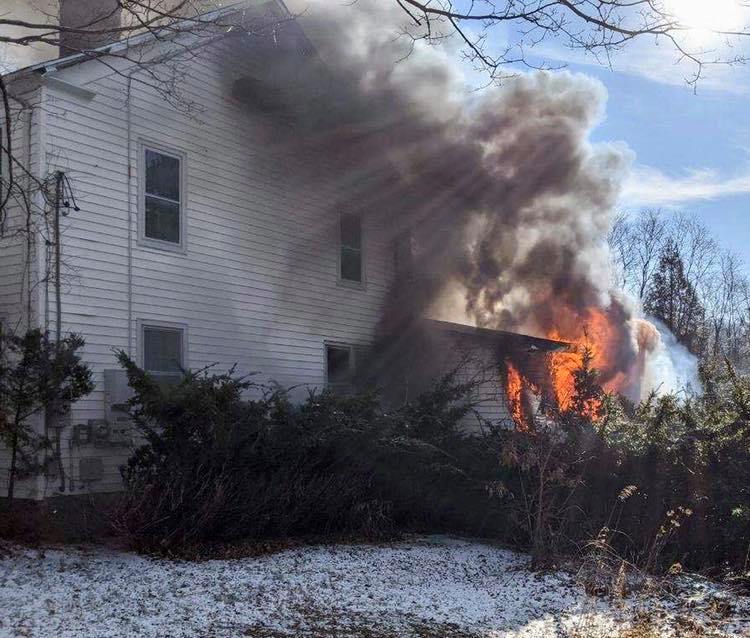 Flames could be seen on the lower level of an old colonial style house on Hattertown Road when firefighters arrived on scene Sunday. Photo from the Monroe Volunteer Fire Department, No.1 Inc. Facebook page

Firefighters battled a blaze while responding to a house fire at 343 Hattertown Road just before noon on Sunday.

On their Facebook page, Monroe Volunteer Fire Co. firefighters said they were joined in their response by the Stepney and Stevenson fire companies.

“Heavy fire was showing on the first floor upon arrival, and all occupants had safely evacuated,” they said.

Firefighters used four hand lines as crews made an aggressive interior attack, fighting the fire on the first and second floors and in the attic, which continued to flare up given the original part of the home was balloon frame construction dating to the Civil War era.

Firefighters also contended with a heavy fire load inside the home whose unusual layout contributed to black-out smoke conditions, a lack of nearby hydrants and ice earlier in the incident.

Trumbull and Easton firefighters were called in to assist in the operation, which required heavy manpower, and several tanker trucks brought in from Newtown supplied water. 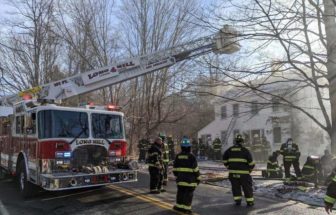 Extinguishing the residential blaze on Hattertown Road required a lot of manpower. Photo from the Monroe Volunteer Fire Department, No.1 Inc. Facebook page

No residents or firefighters were injured and the last fire units cleared four hours later.

Monroe Fire Marshal William Davin said the cause of the fire is undetermined and remains under investigation. The home is uninhabitable and the residents will be staying with family.