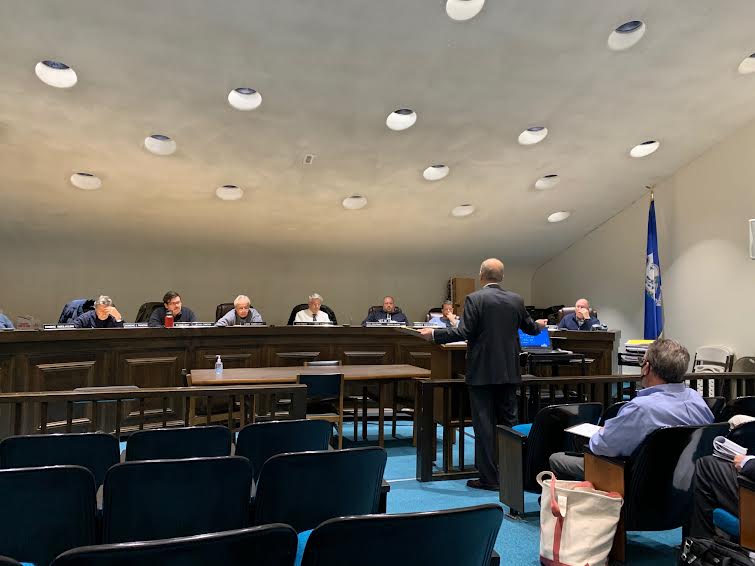 Attorney Joel Z. Green testifies for the intervenor during a Planning and Zoning Commission hearing on 64 Cambridge Drive Thursday.

MONROE, CT — A zoning hearing for a filling permit on a controversial site in the Pepper Street Business Park, a property that had been used as an illegal quarry for years, leaving a giant hole in the earth, came to a close Thursday. Now town land use staff will now draft an approval with conditions for the Planning and Zoning Commission to vote on.

Arnold Karp, managing member of the two LLCs that own 64 Cambridge and 4 Independence drives, needs the permit to fill the hole and restore the site and its damaged wetlands, carrying out a plan approved by the Inland Wetlands Commission.

The wetlands violations were committed by the previous owner, New England Materials LLC.

Karp, who bought the adjacent industrial properties in May of 2019, says he wants to remediate the property and prepare it for development, which will increase the town’s tax rolls.

Among the conditions of an approval, the Planning and Zoning Commission would also retain the services of a licensed environmental professional hired by the wetlands commission, to ensure all of the work is done properly.

Leon Ambrosey, a commissioner, said his main concern is that no fill materials containing contaminants are used, so as not to pollute the water table, which is in a GAA, public water supply watershed.

Ambrosey also said he does not want the site to become a recycling facility, something the applicant told him will not happen, adding fill processed on the site would go into the hole, rather than being taken out to be sold on the market.

Kevin Solli, principal engineer of Solli Engineering in Monroe, who was hired by the applicant, testified that only clean fill will be trucked in.

He said fill will be tested up to the stricter residential, rather than industrial, standards before it is accepted. Then it will be re-tested when it arrives to the site.

During Thursday’s hearing, Solli also said existing stockpiles on the site, which include construction debris from Stratford High School, will be processed and tested before it is put into the ground.

Karp, who told the commission he did his own testing before buying the properties, as well as testing soil as part of town land use applications, said it will not stop there.

“Anyone who is going to come to develop or buy this will take due diligence,” he said Thursday. “They will do a thousand more test borings, so there is nothing here that won’t come back and bite us if we do it the wrong way.”

The commission must make a decision on the fill permit within 65 days of the end of the hearing, but any lingering disputes over the future of the industrial site will ultimately be resolved in the courts.

Peter Metropoulos, a neighboring property owner who petitioned the commission for intervenor status, allowing his own experts to participate in the hearing for the zoning application, is already appealing the wetlands approval in Superior Court.

Metropoulos, who has expressed concerns over the quality of the groundwater, has told the commission he would prefer a lake or a park on the property.

Joel Z. Green, an attorney hired by Metropoulos, said the property owner should be required to process all of the existing stockpiles of fill on the site, before trucking in any new loads of fill.

“We urge the commission to deny this application,” Green said. “This is a puzzle and there are lot of missing pieces. But if you approve this, I ask you to think about a condition to bring the site back to zero before adding fill.”

Green contends the fill to be processed constitutes solid waste, which would make it a recycling operation. Solli said it is clean fill and does not meet the definition of solid waste.

Green also asked if companies will be charged to bring materials to the site. Karp said he will charge in certain cases, adding he will also be buying fill. Solli has said 493,000 cubic yards of material will be imported to fill the hole left by the quarrying operation.

During the intervenor’s presentation, Green asked if he could show the commission a few short YouTube clips of hearing testimony. However, because the video was from their past meetings, commissioners saw no reason to “rehash” testimony by watching it again.

While Green insisted it would be fine to show the videos because the clips are part of the public record, Attorney Steve Finn, who works for Karp, objected, arguing it would be prejudicial to show select clips from hours and hours of testimony.

During the public comment portion of the hearing, Ronald Bunovsky Sr., a resident of 47 years, spoke. He wanted to know what Aquarion Water Co.’s position on the application is, because of the close proximity to a public watershed.

“Aquarion was notified as an abutter and heard complaints from the intervenor, inspected everything and there were no issues — no problems or concerns,” Solli said, adding the company saw no impact to the water system.

“New England Materials is getting away scot-free,” Bunovsky said of the past environmental violations. “We don’t even know what they did in an area that is a critical resource, so how could you consider passing something that doesn’t include an assessment of what happened and how to make sure it does not happen again? There should be no effort to develop it if it remains a critical resource.”

Though development may be proposed sometime years into the future, Finn said the fill permit application is only to restore the property.

If a fill permit is granted, it would expire in two years, and the applicant would be expected to come back for an extension for the work, which has been estimated to take at least five years to complete.