The Eanotti family, Diane, Dennis and children Hunter, Skye, Mason and Nora, poses for a picture with the Masuk field hockey team.

Aside from scoring goals, the Panthers entered the game with the goal of helping to raise as much money as possible for Hunter Eannotti and family. Hunter is a Fawn Hollow Elementary School student who was diagnosed with stage 3 Hodgkin’s Lymphoma in June. 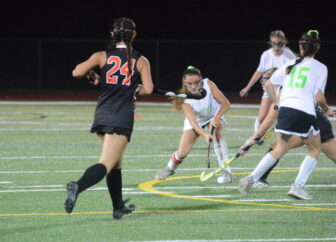 Lauren Henry of Masuk tries to control the ball in a field hockey game against Shelton.

As of Oct. 12, the day after the game, the Masuk field hockey team raised $3,793 to present to the family thanks to a bake sale, donations and raffles.

The Eannotti family and friends, including Hunter’s U11 travel soccer team, were on hand for the game.

“We usually try to pick a different cause each year that has a connection to a family of a player or team member,” Masuk Coach Kathleen Foley said.

Because Foley’s mother had Lymphoma, that was the pick for this year’s cause. Then, Foley heard about Hunter. Her daughter, Fiona, is a friend of Hunter’s sister Skye and Hunter is a former student of Foley, who teaches at Jockey Hollow Middle School. 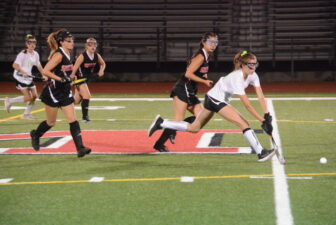 Masuk’s Ella Bunovsky leads the pack in a field hockey game against Shelton.

“When I heard the last name it hit close to home,” said Foley.

So the game took on even more meaning for the coach and team members.

“We are deeply moved by the support of the community and Coach Foley’s tremendous gift of even thinking of us,” said Diane, Hunter’s mom. “We realize at times like this that life ties us to people in different ways.”

Diane was joined in the stands, as well as on the field for a photo with 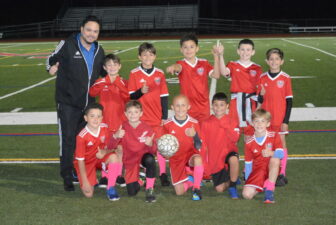 Hunter Eanotti’s U11 travel soccer team and its Coach Carlos Reinoso were there to support him during Masuk’s field hockey game Monday.

the Masuk team, by her husband, Dennis, and children Hunter, Skye, Mason, and Nora.

As for the game, Amelia Logan scored three goals and Emma Cusa scored one. Assists were made by Molly Halliday, Emma Cusa and Izzy Viglione.

Donations may be made via Venmo: @Masuk-fieldhockey.