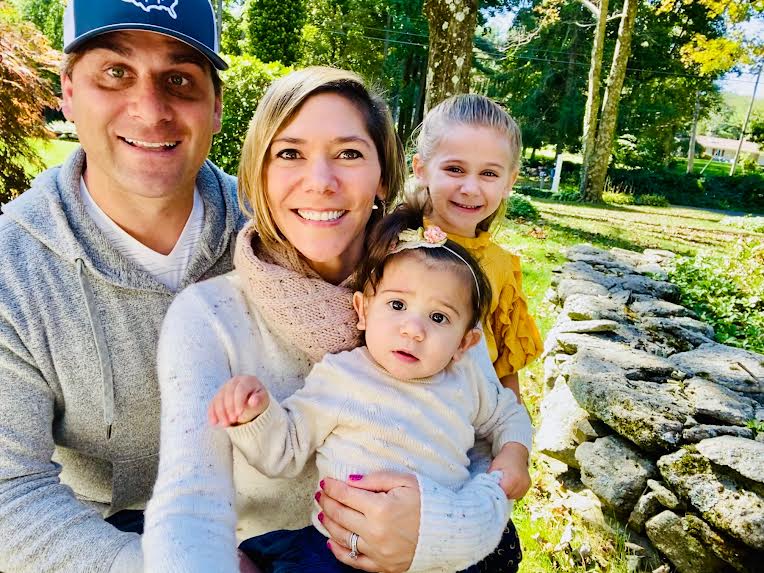 MONROE, CT — When fans tune into the second season of Food Network’s TV show, “Outrageous Pumpkins” some will see a familiar face among the contestants competing to be crowned this season’s carving champion. Christine Scarpati, a Fawn Hollow Elementary School art teacher, will put her skills to the test in pursuit of the $25,000 prize.

Scarpati, a married mother of two, picked up pumpkin carving as a hobby seven years ago, after marveling at Ray Villafane and Deane Arnold’s technique of using clay loop tools to carve on Food Network’s show “Pumpkin Wars.”

“I like how it’s a temporary art form,” she said. “You don’t puncture all the way through the pumpkin. It lasts longer. It’s a little neater. It’s not like you’re gutting the whole pumpkin. I had just started doing it and I made my Instagram public — and I think that’s how Food Network found me.”

While admiring the carvers on “Pumpkin Wars” Scarpati never imagined her new hobby would lead to her starring on a Food Network show herself one day.

“I probably would have just laughed and said, ‘yeah right,'” Scarpati said of the scenario. “It’s still kind of surreal.” 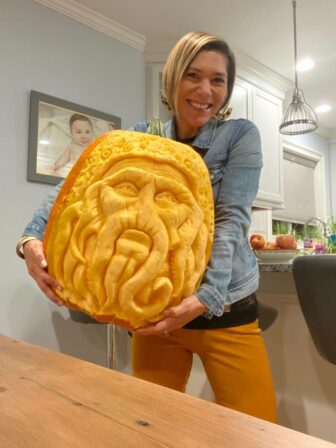 Christine Scarpati shows off one of by pumpkin carvings.

Scarpeti said she initially did not believe the instant message was real, when she received it last year from a casting agent encouraging her to apply online to be a contestant on the new show, “Outrageous Pumpkins.” But after Googling the woman’s name, she learned she was connected with the Food Network and responded.

She was among seven contestants chosen from thousands of applicants to compete in the show’s second season.

Alyson Hannigan is the host of “Outrageous Pumpkins,” a show in which “carvers face off in outrageous challenges that test their creativity and pumpkin prowess as they sculpt gravity-defying scenes that celebrate Halloween and impress judges Terri Hardin and Ray Villafane,” according to the description on the Food Network website.

The first show airs on Sunday, Oct. 3, at 10 p.m. The contestants, who are not eliminated after the first challenge, move on to the next show. There are four shows in all and each appears on Sunday at 10 p.m.

Once in a lifetime opportunity 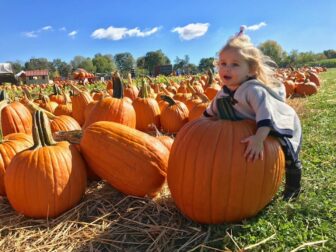 Grace Scarpati, 5, sees a pumpkin she likes during her mother, Christine’s shopping trip at Jones Family Farm in Shelton.

“Outrageous Pumpkins” does the filming for its seasons a year ahead of time, so the filming for Season 2 took place at the height of the COVID-19 pandemic when the school district was scrambling to come up with a hybrid learning model.

“I thought I’d have to turn them down, because my family and my job comes first,” Scarpati said of participating in the fall filming.

But she said Superintendent of Schools Joseph Kobza and Fawn Hollow Principal Leigh Metcalf Ances told her it was an opportunity of a lifetime that she couldn’t pass up.

“They were so positive and confident in my skills,” Scarpati said. “Joe said, ‘you might win it. You might be there the whole time.’ They were really excited.”

Scarpati said Assistant Superintendent of Schools Jack Ceccolini was also supportive of her competing on the TV show.

The administrators ensured all of Scarpati’s work would be covered when she was away, and her husband told her he would figure things out, while caring for their two children on his own.

Now the school district is anticipating the show’s first airing. 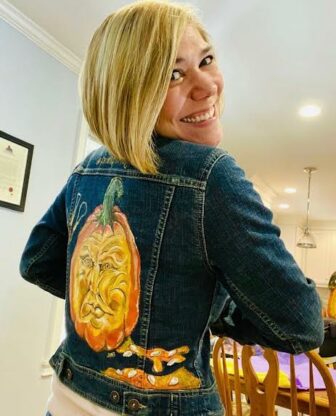 Christine Scarpati painted one of her jack-o-lanterns onto the back of a jean jacket.

“Chrissy is an incredibly talented and creative teacher,” Kobza said. “She brings so much to Fawn Hollow, as well as the entire district. She was always a foundation of the district’s Da Vinci Fest. We’re so proud and excited to see her on ‘Outrageous Pumpkins.’ I know she will continue to make us proud.”

Scarpati made friendships with people from the show, including master carver Deane Arnold, who agreed to visit the school on Sept. 29, so they can carve pumpkins with Fawn Hollow fifth graders.

The PTO helped to fund the event and Jones Family Farm in Shelton is donating the pumpkins.

“Mrs. Scarpati is an outstanding art educator, and now the whole country has a chance to meet her and see her work,” Ances said. “It’s so exciting!  We will all be cheering her on as we watch the show. Her pumpkin carvings are amazing, and it’s incredible to see the different designs she comes up with each year.”

“We are all very proud of her, and I know that she will bring back what she learned from this experience and share it with our learners,” Ances added. “Thanks to our very supportive PTO, some of our students will get to work with master pumpkin carver Deane Arnold.”

During the filming, Scarpati said the YMCA school program and The Goddard School of Monroe were both flexible, allowing she and her husband to drop their daughters off early.

Scarpati brought Grace’s stuffed owl on her trip to New York, and made a game of sending her daughter pictures, “Owlie is driving.” “Now Owlie is brushing his teeth.”

Scarpati said she was impressed with how Food Network took steps to keep contestants safe from the coronavirus during filming, as well as with all of the work behind the scenes that goes into producing a TV show.

“It was a great opportunity and a fun time,” she said. 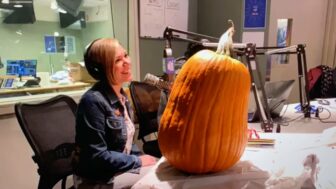 Scarpati has fond memories of carving pumpkins and decorating Easter eggs with her brother, Brian, and sister, Kim, while growing up in Trumbull.

She said her parents, Susan and Romeo Crea, always encouraged her interest in the arts.

“One time in high school I wanted to try to recreate a Van Gogh painting out of jelly beans, just to see if I could, and my mom took me to the mall to buy out every sort of Jelly Belly flavor possible for me to glue,” Scarpati said. “They’re amazing. They support not only my love of the arts, but also my pumpkin addiction and have even come to take an extra car full home for me.”

Scarpati said the variety of shapes of pumpkins inspires her imagination when thinking of new carving ideas. She likes the quality and thickness of the pumpkins at Jones Family Farm.

“I bring Justin and we fill a large barrel of pumpkins,” she said.

One day, a farmer there asked Scarpati what she was doing with 12 pumpkins.

When she told him about her hobby, he asked her if she would do live pumpkin carvings during a Unicef fundraiser at the farm. She did and one of her pumpkins was auctioned off for the cause.

Scarpati has appeared on “Anna and Raven,” a morning radio show on Star 99.9, two times, when she did pumpkin carving demonstrations shown on Facebook Live.

As an artist, Scarpati teaches and does commission work on the side. Fine art drawing and painting are her usual mediums, but she also loves to try new things. 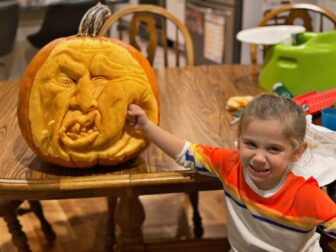 Grace Scarpati poses by her mother’s carving of a pumpkin absorbing the impact of a punch.

Scarpati said she hopes her experience on “Outrageous Pumpkins” encourages her students to embrace new things themselves.

“I always tell them do something you love, because you’re going to have to do it every day,” Scarpati said. “Don’t be afraid to try new things. You never know where it will take you.”