American Ninja Warrior Joe Moravsky talks to fans at a viewing party for the airing of the Baltimore City Finals on a big screen at Jockey Hollow School Monday.

Close to 100 fans gathered in front of a big screen in the Jockey Hollow School auditorium to watch Monroe’s own, Joe Moravsky, compete in the Baltimore City Finals for the 11th season of “American Ninja Warrior” on NBC Monday night.

Moravsky attended the viewing party with his wife Stephanie, who is a teacher at Fawn Hollow Elementary School, and their two children, Emily, 3, and Jacob, 1.

“It’s always fun talking to fans, especially from Monroe — my hometown,” Moravsky said before the show. “It’s a great town, not just the schools, but the amenities it has to offer.”

Moravsky sold shirts at a table, signed autographs and posed for pictures with families. Outside, a kettle corn booth was set up and a Good Humor truck sold ice cream.

“It’s awesome every year to see the support of the people who come out to watch,” said Stephanie Moravsky.

Robert Dunbar brought his son, Bobby, 10. “Not many people know that he lives right here in town,” Dunbar said of Moravsky. “My son is one of his biggest fans. He’s been a fan of his since he started. He roots for all the Connecticut ninjas.”

Robert Westlund, who is vice chairman of the Economic Development Commission in town, went to the viewing party with his wife, Athena, and their two daughters, Deanna, 5, and Eva, 3.

“I’m a big fan,” Westlund said. “We watch it with the kids all the time. We actually set up age-appropriate courses for our kids in the house.”

The Westlunds set up a mini-trampoline and balancing beams and their girls do handstands and rolls.

On Monday night, they would see if Moravsky made it to the finals in Las Vegas.

“It’s cool to see someone local in prime time,” Westlund said. “You’ve gotta find someone to root for.” 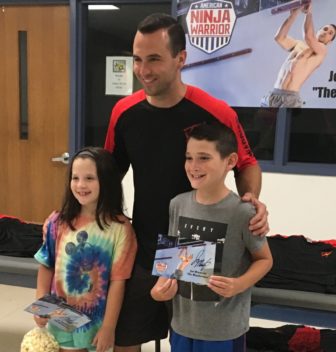 Jay Bortzfield took a picture of his children, J.D., 10, and Emma, 8, with Moravsky in the lobby. “We’ve been watching him since the beginning,” he said. “We got hooked on the show, especially knowing Joe is on it.”

First Selectman Ken Kellogg said he spoke with Moravsky at the Monroe Farmers’ Market when the idea for a viewing party came up. He credits Parks and Recreation Director Missy Orosz with making the event happen.

“We threw it together real quick,” Orosz said. “We put our flier on Facebook and did an e-blast to the kids in camp. The Board of Education was great about allowing us to have this venue.”

“The whole reason why we’re doing this is because he’s a Monroe resident,” Kellogg said of Moravsky, “and we’re very proud of our Ninja Warrior. It’s great to have the community come together to cheer him on.”

Beware of the Angry Birds

“We’ve got big stars in Baltimore! Including the Weatherman!” the announcer’s voice boomed as the camera showed Moravsky, looking larger than life on the big screen inside the Jockey Hollow auditorium, which erupted into cheers.

Moravsky is nicknamed The Weatherman, because he also works as a freelance meteorologist for News 12.

Athlete after athlete ran, jumped, climbed and swung their way through the course and all who made it to an obstacle called Angry Birds wound up falling into the swimming pool below.

Ninja Warriors had to grab onto the sides of the flat obstacles and swing to others, grabbing onto them in mid-air, but everyone either lost their grip or missed it completely.

“That’s turning out to be an angry obstacle,” Moravsky told the audience during a commercial break. “That night, nobody wanted to do it after seeing so many people fall. It plays on you. It’s a psychological part of the game.”

Moravsky said he trains with the best athletes to gain the mental confidence of seeing people succeed.

The Weatherman takes his shot 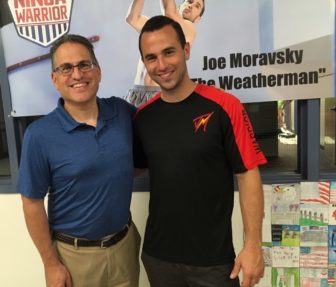 While other athletes moved more deliberately through the course, Moravsky quickly ran over obstacles that were spaced apart, then swung from a rope, ran up a platform and swung through the air from one trapeze to the next, before gaining enough momentum to swing himself to a platform.

Using both hands, he held his entire body weight while climbing down a wide, flat obstacle and leaping through the air to a second one.

Moravsky ran up hazard cones and jumped to another platform.

He jumped up and grabbed a “crank it up” obstacle, then propelled himself to crank it to its highest point before swinging through the air and grabbing another one. Moravsky repeated the exercise, leaped to a trapeze and swung to the next platform.

On the screen, Moravsky danced around with the Ravens’ mascot, before running up a wall, grabbing the top and climbing over it.

In the auditorium, Moravsky explained how he tried to get through the course quickly to conserve his energy for the Angry Birds.

On the screen, Moravsky jumped and grabbed a bar to climb the Salmon Ladder. At the top, he grabbed an Angry Bird obstacle and prepared to swing to another.

He successfully grabbed the second one and swung back and forth to propel him to a third.

He flew through the air and grabbed the third bird.

Moravsky leapt toward the next obstacle and grabbed it, before his left hand slipped and he fell into the pool down below with a splash.

“Oooooh!” the audience inside the auditorium groaned.

“I had it!” Moravsky exclaimed from his seat.

Did Joe make it to Vegas?

Though Moravsky said it was not an excuse, he shared how he injured fingers of his left hand while practicing — 10 days before Baltimore. He could not train again until the competition and felt 90-percent on the day of the city finals.

He also told the audience how he clipped his elbow during the season.

Moravsky said athletes must put their losses behind them to succeed again.

“Kids, the past is the past,” he said. “You can let it motivate you, but you have to live in the now.”

Though Moravsky fell in Baltimore, he still had a chance to finish high enough to make it to the finals in Las Vegas and compete for the $1 million prize. 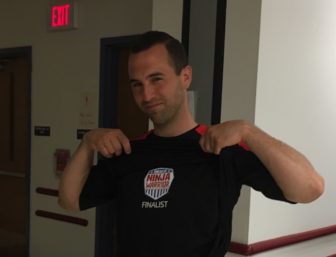 He said anyone who had to leave the viewing party early could see him in the school lobby to find out if he made it.

As people crowded around him, Moravsky lifted his jersey to reveal a black T-shirt underneath. The “American Ninja Warrior” logo was in the center. Beneath it was the word: “Finalist.”