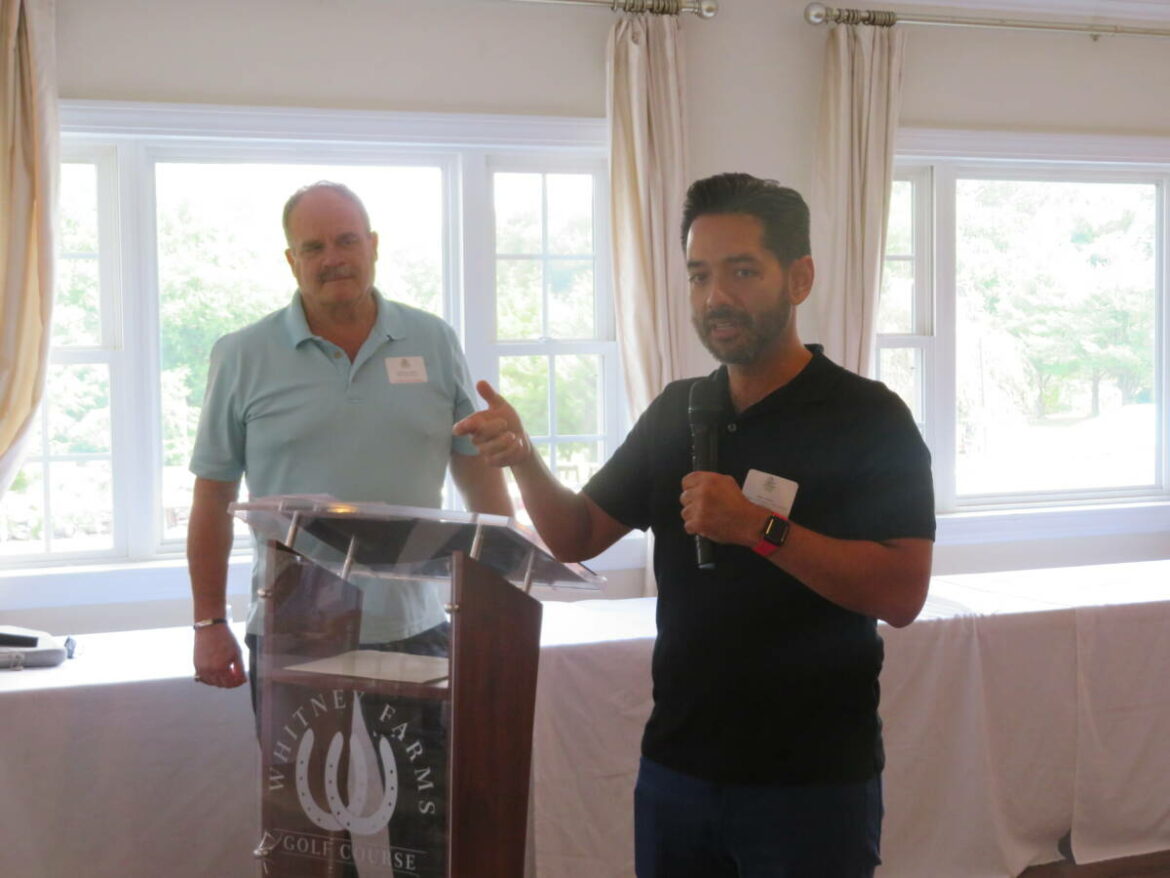 Roger Osorio, author of the book, "The Journey to Reinvention", right, speaks at the Fairfield County Commercial Brokers Network luncheon at The Stone Barn Monday, as Winthrop E. Baum looks on.

MONROE, CT — Commercial brokers trying to find the ideal piece of land, building or rental space for their clients attended a lunch at The Stone Barn at Whitney Farms on Shelton Road Monday afternoon to see what Monroe has to offer.

“We meet monthly at different Fairfield County locations,” Baum said. “We have 1,600 brokers on our meeting list.” 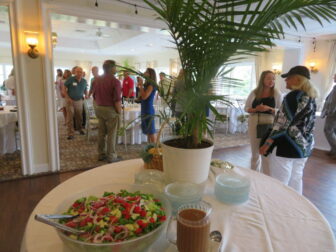 He said different groups of brokers attend meetings in the towns they are interested in. In September, FCCBN will meet at Reverie Brewing Company in Newtown.

Baum said commercial brokers work with professionals from a variety of trades, including restauranteurs, doctors, dentists and retailers to find locations for their businesses.

On Monday, town officials, professionals and commercial brokers mingled in The Stone Barn’s large dining room and while seated around tables.

“So many people have transacted business over these tables in a friendly way,” Baum said. “That doesn’t happen in Zoom. It’s not as effective as face-to-face.”

Among the guests Monday was Monroe First Selectman Ken Kellogg.

“We’re proud to host this event every year, because it’s important for us to get in front of commercial developers and share what we’re doing to make it easier to do business in town,” he said. “This is a great way to build relationships, keep communication going and answer questions.” 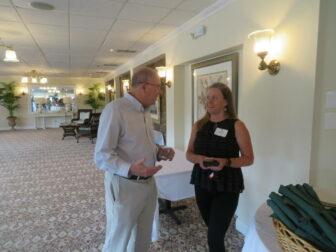 Christal Preszler, deputy director of Economic and Community Development for the town of Newtown, also attended the luncheon.

“It’s always nice to see people and come up with new ideas,” she said. “It’s important for us to remind them of Newtown. FCCBN is based in Norwalk, so it reminds them that Newtown is in Fairfield County and we have a lot to offer.”

At the meetings, brokers share success stories of closed deals and what types of properties their clients are looking for in hopes of getting a lead.

On Monday, author and executive coach, Roger Osorio, was a special guest. He discussed his new book, “The Journey to Reinvention: How to Build a Life Aligned with Your Values, Passion and Purpose.” 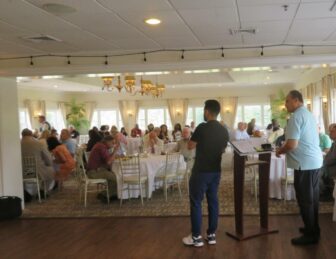 Roger Osorio, author of the book, “The Journey to Reinvention”,  speaks at the FCCBN luncheon at The Stone Barn Monday.

“We’re certainly growing and evolving,” Osorio said. “We’re not the same person we were years ago. It’s a special opportunity. It keeps our lives exciting and keeps us on our toes. It’s not just our DNA. Our passion and purpose changes.”

“I will become a father in three months and I’m learning a lot about how my values are shifting,” he continued.

Osorio reinvented himself professionally several times. He was a middle and high school math teacher, taught over 150 IBM managers and coached over 25 IBM executives, was a three-time facilitator of the World Bank Youth Summit, and has been a professor of entrepreneurship at Sarah Lawrence College since 2018. 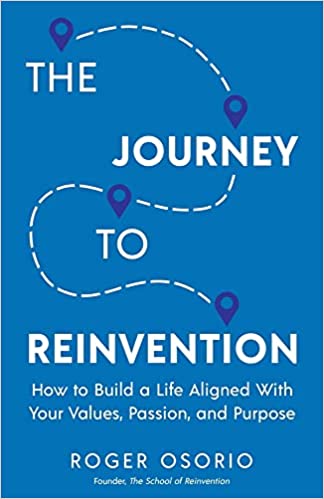 He said it is important to listen to other people’s ideas and feedback, because it can lead to ideas you wouldn’t normally get on your own. Osorio said creative people often get ideas from outside their field, finding something they can also do or repurpose.

“My challenge to you is to step outside your field. Listen. Be a student again,” he said.

Osorio said he got into Formula 1 and asked a lot of questions about racing, some that may seem stupid.

“Ask more powerful questions that lead to answers,” he said. 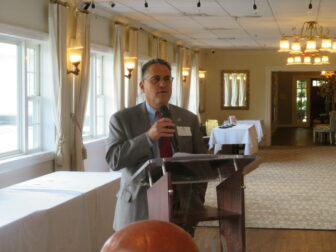 The first selectman took a turn at the podium to talk about Monroe’s effort to be more business and development friendly, in a way that is responsible and respectful of the town’s residential neighborhoods and the environment.

The Planning and Zoning Commission approved new zoning and text amendments and regulations designed to make it easier for commercial applicants, according to Kellogg.

He praised Schultz for guiding this effort and preparing draft approvals before commission meetings, allowing commissioners to approve applications the same night if they choose, rather than waiting another meeting, which could take a month. 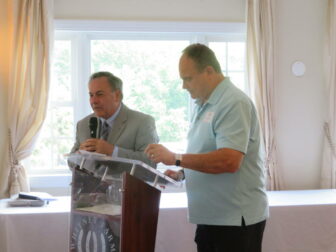 Ray Giovanni, left, president of the Monroe Chamber of Commerce, speaks during he FCCBN luncheon at The Stone Barn Monday, at right is Winthrop E. Baum, who formed the networking group.

A Stevenson Business District approved for the former Stevenson Lumber property breathed new life there, as businesses are moving in, and the Main Street Design District allows more flexibility for development in the town’s commercial corridors, according to Kellogg.

Kellogg said relaxed regulations for outdoor dining allows restaurants to apply for patio seating with a minor site plan application and no hearing.

He said town officials made it easier to get fill and excavation work done, which could pave the way for development on the challenging Vitramon property on Main Street, which has been regraded.

“That site is really looking nice,” Kellogg said. “It’s ready for development. We understand an application is coming soon.”

The town received feedback from businesses that its outdoor storage requirements were too restrictive, so Kellogg said they relaxed it, adding R. Stone Co., which is moving to Monroe, will take advantage of that.

Holsworth helps developers with pre-application meetings and by answering questions throughout the process.

“The team is here to be able to give you answers on how to be successful,” Kellogg said. “One of our biggest changes is we have folks who are here to help.”

He also praised Giovanni for the work of the Monroe Chamber of Commerce and the Economic Development Commission, which he chairs.

A dilapidated building at 4 Easton Road, at the corner of Routes 25 and 59, is being rebuilt and refurbished to make way for a bagel shop.

Two old residential homes on Monroe Turnpike were demolished, one next to where the Panera Cafe is going, and another just north of Spadaccino and Leo P. Gallagher & Son Community Funeral Home, Kellogg said.

“We have interested applicants in those parcels,” he said, adding another property in the Monroe Turnpike/Purdy Hill Road area has an older home that “will hopefully be coming down in the near future.”

New businesses, including a proposal for a retail building with Chipotle, Jersey Mike’s and a third tenant on Purdy Hill Road, are coming to town, and Kellogg said companies like Biomerics are staying here and expanding.

With all of this economic activity, Baum asked Kellogg if the town was able to reduce its mill rate.

Kellogg said, like a lot of other towns, Monroe’s mill rate has gone up due to increased costs. But he said he is proud that the average annual mill rate increase over the last five years has been less-than-one-percent.

“Our focus is to keep it under control and have savings for the taxpayers,” he said.

“Thank you for making Monroe an inviting place to do business,” Baum said.