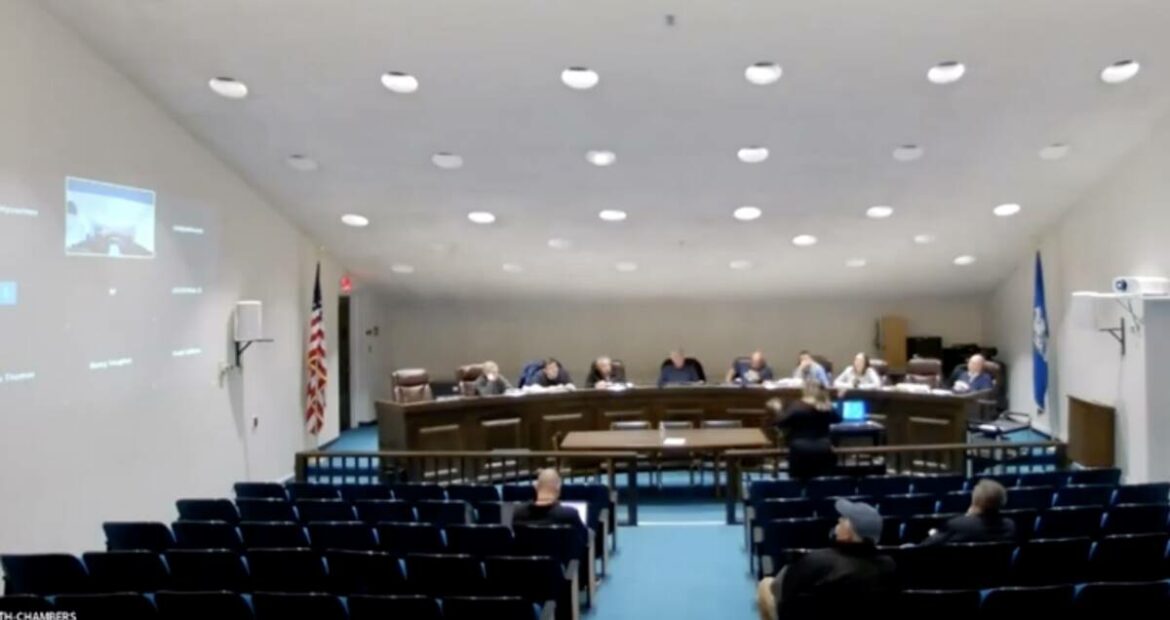 Rebecca Wood, owner of a neighboring property to 909 Main St., asks the Planning and Zoning Commission to extend its hearing on an excavation and fill permit application for the property during a hearing Thursday.

MONROE, CT — The Planning and Zoning Commission recently approved an excavation and fill permit at 909 Main St., allowing a developer to prepare the 2.9-acre-site for construction of a future building and parking lot.

The application was previously approved before the commission learned neighboring property owners were not notified about the hearing. The approval was rescinded and notification mailers went out ahead of last Thursday’s hearing.

Mercurio Porco, the applicant and owner of Porco Construction, said they received all of the cards back with the exception of Rebecca Chase Wood. Wood had sold the property to him for $430,000 on January 24, 2003.

Wood attended Thursday’s meeting in person, and some other neighbors did so remotely. She asked for an extension, so they could be better prepared to speak on the proposal.

Wood said it would be hard to believe that residents living on a combined 25 acres of neighboring properties zoned residential/farming wouldn’t have something to say about the application.

Chairman Michael O’Reilly asked Town Planner Rick Schultz if the property owners were notified this time around. Schultz said yes and noted that Wood, who said she was not, was present.

O’Reilly told Wood this was the time for her and her neighbors to speak on the application.

“There in lies the problem,” she said, adding Schultz told her she could ask the commission to defer the hearing to a January meeting, and she saw it as a choice of presenting on Thursday or continuing the hearing.

Vice Chairman Bruno Maini told Wood she could ask for it, but the commission does not have to continue the hearing.

“How long have you had the notification,” asked Robert Westlund, a commissioner.

“I never had notification,” Wood said. “I never received it.”

Wood said she did not know the details of the proposal.

“But you had two weeks to look into it,” Maini said.

Alison Hyvarinen and husband Barry, who live at a neighboring property on Main Street, said they received notification two weeks before Thursday’s hearing. Alison expressed concern that work was being done on the property every day during the month of November, and continues to be done.

“He started excavating the property, because he thought he had an approval,” Maini said of Porco.

Leon Ambrosey, a commissioner, said he understood the work would cease when the initial approval was rescinded. “According to this resident the work continued to go on,” he said.

Porco told the commission he needed to cut through a five-foot-mound to make a driveway to access his property, which his attorney told him was his right as a property owner, and that he could do work on his property as long as it did not infringe on grading and filling.

He said work was also done to comply with the state of Connecticut’s requirement that there be a sight line at the driveway for traffic safety.

“I wasn’t going beyond my limits. I was just trying to access the property,” Porco said.

He said he told the town planner and Barry Hyvarinen he would stop the work that week.

“I apologize for anybody that’s not knowing. These poor people bought their property without knowing that site was an industrial site,” Porco said of his parcel. “Rebecca knew. She sold my property to me. She didn’t notify them. That’s not my problem.”

To close or not to close

Schultz said the commission had to make a finding on whether the mailing notifying neighbors of the hearing was in compliance, and he gave some dates when the hearing could be continued if that’s what the majority wanted.

O’Reilly asked fellow commissioners how they felt about keeping the hearing open.

Ambrosey said he did not have a problem continuing the hearing, because “we messed up the first time.”

Secretary Ryan Condon acknowledged there was problem when the notification did not go out for the first hearing, but said the problem was rectified with a new application and new notifications.

Condon expressed his fear that it would set a dangerous precedent to allow participants from the public to request extensions for an application, because there are deadlines for decisions. He also said he did not see a compelling reason for the extension.

Ambrose contended it was not a full application and could not be deliberated on that night.

Maini said he was of the opinion to close the hearing and others agreed.

During deliberations the application was approved with Westlund, Maini, Condon and O’Reilly voting yes and Ambrosey voting no.

One thought on “Excavation and fill permit makes way for building at 909 Main St.”