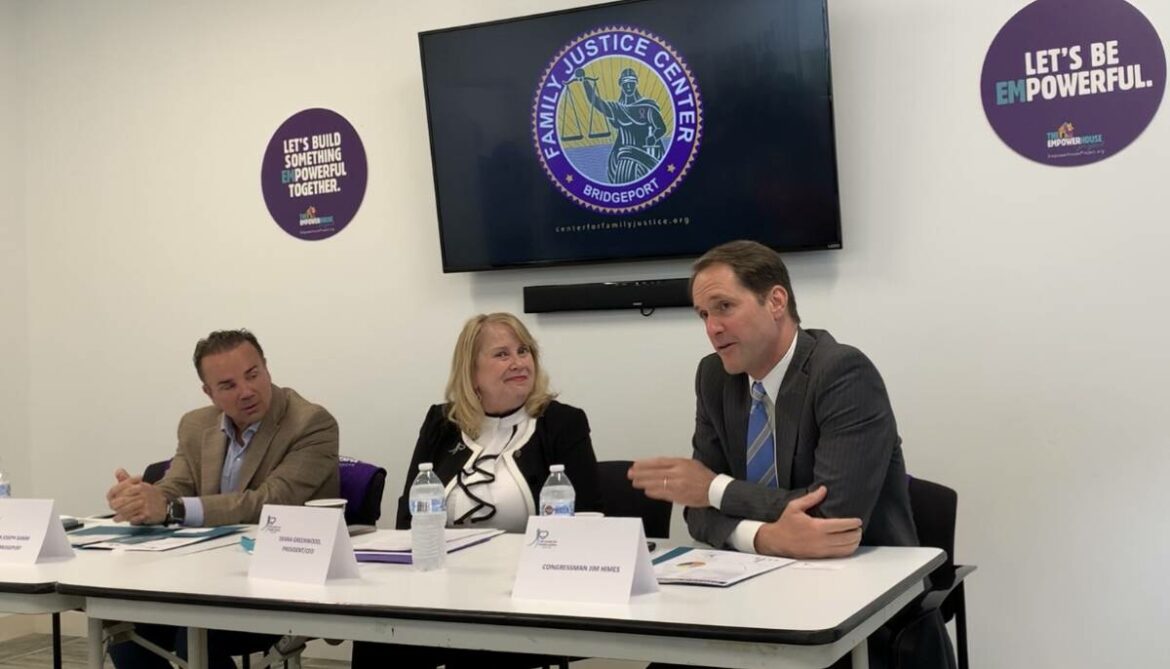 BRIDGEPORT, CT — Domestic violence is on the rise, straining the capacity of the safe house The Center for Family Justice uses to protect victims and their children, so CFJ is raising $3.5 million to build Empower House, a larger transitional house, to replace it.

A press conference was held at CFJ’s headquarters Wednesday morning to celebrate the funding. Among the featured guests were Himes and Bridgeport Mayor Joseph Ganim, who helped the nonprofit with its effort to receive land use approvals from the city. 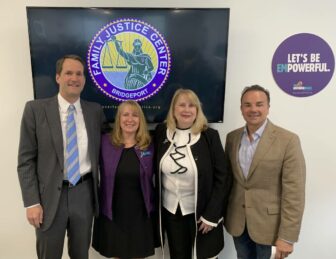 The two men were seated at a table with Debra A. Greenwood, president and CEO of CFJ, in front of an audience of over 40 supporters, including staff and board members, and law enforcement officials.

“I know it’s a dreary day, but it’s bright sunshine in here today,” Greenwood said, alluding to the rainy morning.

She said the funds will allow the center to “provide more hope, safety and critically needed protection to hundreds of local adults and children who live in constant fear of domestic abuse.”

“These federal dollars will help us cross the finish line to be able to build this new residence which we know will change and save lives,” Greenwood said. “We are incredibly grateful to Congressman Himes for his partnership and advocacy on behalf of the thousands of victims we serve each year.”

CFJ provides free, confidential services at no cost to more than 4,300 people impacted by abuse each year in the communities of Bridgeport, Easton, Fairfield, Monroe, Stratford and Trumbull.

Empower House will have private rooms big enough for families, play spaces for children, large rooms for support groups and empowerment sessions, a safe kennel for clients’ pets, a “state-of-the-art” security system, and a meditation and wellness space.

Greenwood said she hopes it will be ready to open its doors by the end of this calendar year. 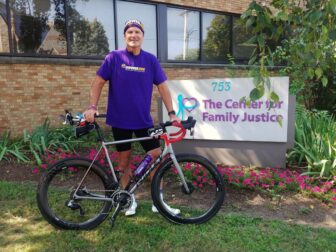 Greenwood and Kathryn Maiolo, chair of CFJ’s board of directors, both live in Monroe. Other town representatives attending Wednesday’s press conference were Police Chief Keith White and Det. Nicole Buckley.

Alan Masarek, of Milford, an avid cyclist who raised money for Empower House by riding his bike 3,800 miles, from Portland, Ore., to Portland, Maine, last summer, attended the event with his wife, Patti. Both are co-chairs of the Empower House Project.

Karen R. Brown, of the Fairfield County Community Foundation, had made the recommendation through Congressman Himes’ office that grant money be awarded to CFJ as a worthy nonprofit.

Himes said the Empower House project was among 10 applications chosen from 100 submissions. He said there was a careful vetting process to ensure the earmarked federal money would be dispensed fairly. 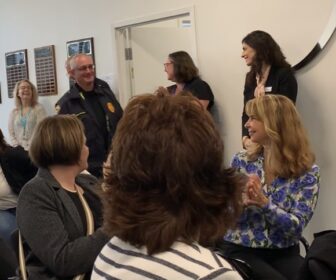 Monroe Police Chief Keith White receives a round of applause, before saying a few words at The Center for Family Justice’s press conference Wednesday morning.

While Connecticut has many “wonderful organizations”, Himes said the “amazing work” The Center for Family Justice does dealing with domestic violence stands out.

“You guys are the unsung heroes,” Himes said, praising CFJ’s leadership and staff. “I’ve seen what you do day-to-day. I’ve seen how tense, how anxious, how anxiety producing it can all be. My office just had 100 percent faith in the quality of the work that you do, and that we would hold this up as something that would be a national model for how we can get resources to people who are changing lives and, in this case, avoiding really, potentially awful tragedy.”

Himes said CFJ will use the money “to change lives and really make the community a better place.”

Ganim also praised Greenwood for her leadership and the commitment from her staff in providing comfort and aid to people at the most difficult times of their lives.