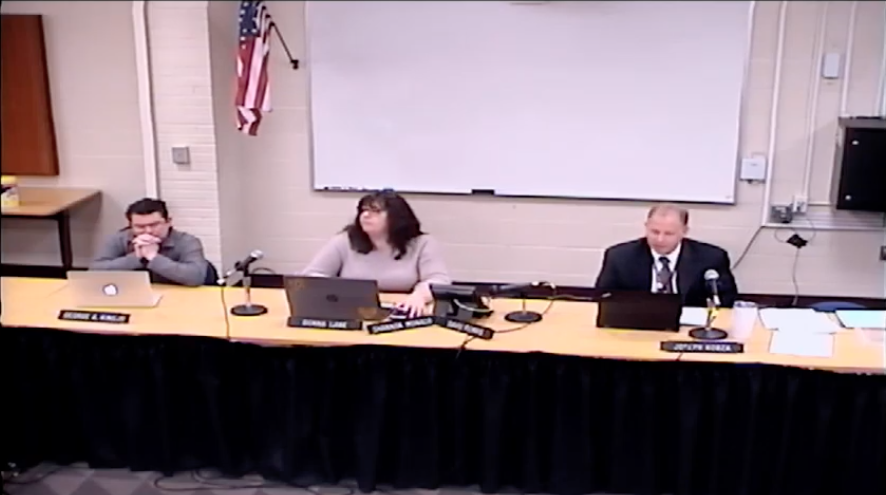 Acting Superintendent of Schools Joseph Kobza, right, speaks at Tuesday's Board of Education meeting, Seated next him, from left, is Vice Chairman George S. King III and Chairwoman Donna Lane.

MONROE, Conn. — Acting Superintendent of Schools Joseph Kobza says there were nights he would go to bed thinking of what the district would do in response to the COVID-19 pandemic, only for things to change when he woke up the next morning.

“The one thing I’ve learned over the past few weeks is the only thing for certain is nothing is for certain,” Kobza said during a Board of Education meeting Tuesday night.

The number of people allowed inside the Masuk High School media center was limited, as social distancing to prevent the spread of the virus was in effect.

With schools expected to remain closed indefinitely, Kobza shared a draft of a distance learning plan put together by administrators and teachers.

He acknowledged how he spoke against seeking a waiver for distance learning at the last board meeting, explaining that the Connecticut education commissioner initially recommended refraining from it due to liability concerns over issues of equality of education for every student and special education issues.

But then Kobza received an email from the commissioner saying not to worry about waivers and to start putting together and implementing distance learning plans.

Kobza said Monroe public schools had already been working on a distance learning plan since February in the event of a long term closure.

“We’re probably looking at a long term closure,” he said Tuesday. “The governor said March 31, but all indications seem to be we are in this for the long haul.”

An outpouring of support

Kobza said 50 people participated in the planning for distance learning in the district on Monday, including parents, teachers, administrators and staff from Sodexo, which provides food for the cafeterias in Monroe’s public schools.

Kobza said a good cross section of people from all of the town’s schools were represented.

“I really can’t begin to explain the outpouring of support we’ve had throughout this whole situation, but especially over the last 24 hours as we put the final touches on our interim learning plan,” Kobza told the school board Tuesday.

He said social distancing was practiced during the planning with 25 people working in the Masuk media center and another 25 via Google hangouts.

They generated questions that needed to be answered and organized it into categories like technology logistics and communications. Then they broke up into groups for each category, speaking together for an hour, before reporting back to the big group, according to Kobza.

They put the finishing touches on it by 4:30 p.m. Tuesday and Kobza said it would be sent to staff Wednesday morning, before going out to parents.

Kobza said it was a collaborative process, both internally and externally. District superintendents from the entire state have been sharing parts of their plan and Monroe has done the same thing, he said.

“It was nice to see a lot of people come together,” Kobza said. “Everyone knew they were in the same boat. We’re all in this together. We’ve got to figure out how can we make this as good as possible.”

Kobza asks parents to be patient as the district gets through the first few days, then to be partners, communicating with teachers whenever problems arise — “and they will arise,” he added.

Kobza said 327 students in Monroe public schools are on free and reduced lunch.

“We worked really close with Sodexo, who applied to the state to provide lunches throughout the closure,” he said.

Starting Thursday, he said lunches will be given out in a grab-and-go style at Jockey Hollow Middle School, because it is centrally located.

During an Emergency Operations Team meeting hosted by First Selectman Ken Kellogg Monday morning, Kobza said they talked about coordinating with Social Services to have volunteers deliver lunches for those, who can’t get there because of their jobs.

“As of 11 o’clock this morning, we have about 85 people who already signed up for their kids to receive a meal in the days ahead,” Kobza said.

Jerry Stevens, a board member, asked if the free lunches given out at Jockey Hollow is only for students enrolled in the free and reduced lunch program. Kobza said it is open to any school aged child between the ages of 3 and 18.

Chairwoman Donna Lane said a parent told her she has four kids and asked if all are expected to be online at once and Kobza confirmed every student must have a device to do their work.

“We have enough devices if we had to outfit every student from, I want to say grades three to 12, with only 30 being used from the high school,” Kobza said.

He was asked about iPads, but recommends using laptops or Chromebooks. Kobza said distance learning will be run like a full school day throughout the week.

Nick Kapoor, a board member, asked if there was any guidance from the state about the potential for legal liability, should some parents not be satisfied with the district’s plan.

“I am constantly concerned about liability,” he said.

Kapoor noted how the commissioner’s email made no mention of individual education plans and planning and placement team plans for special education students.

“The state hasn’t given guidance yet,” Kobza said. “I have to assume they are overwhelmed and will give us guidance. It is a huge concern, what’s gonna happen, because the liability hangs over every district.”

“I’m not holding my breath for the state,” Kapoor said, “but one, two or three people could be understandably upset.”

Shannon Monaco, a board member participating in the meeting via conference call, said, “I find that disheartening and sad that there may be a few litigious people, when people are working so hard to make distance learning work.”

“We’re ahead of the game here,” said Vice Chairman George S. King III. “The fact that you put this together already is commendable. Everybody knows it’s a collaborative effort. Good work.”