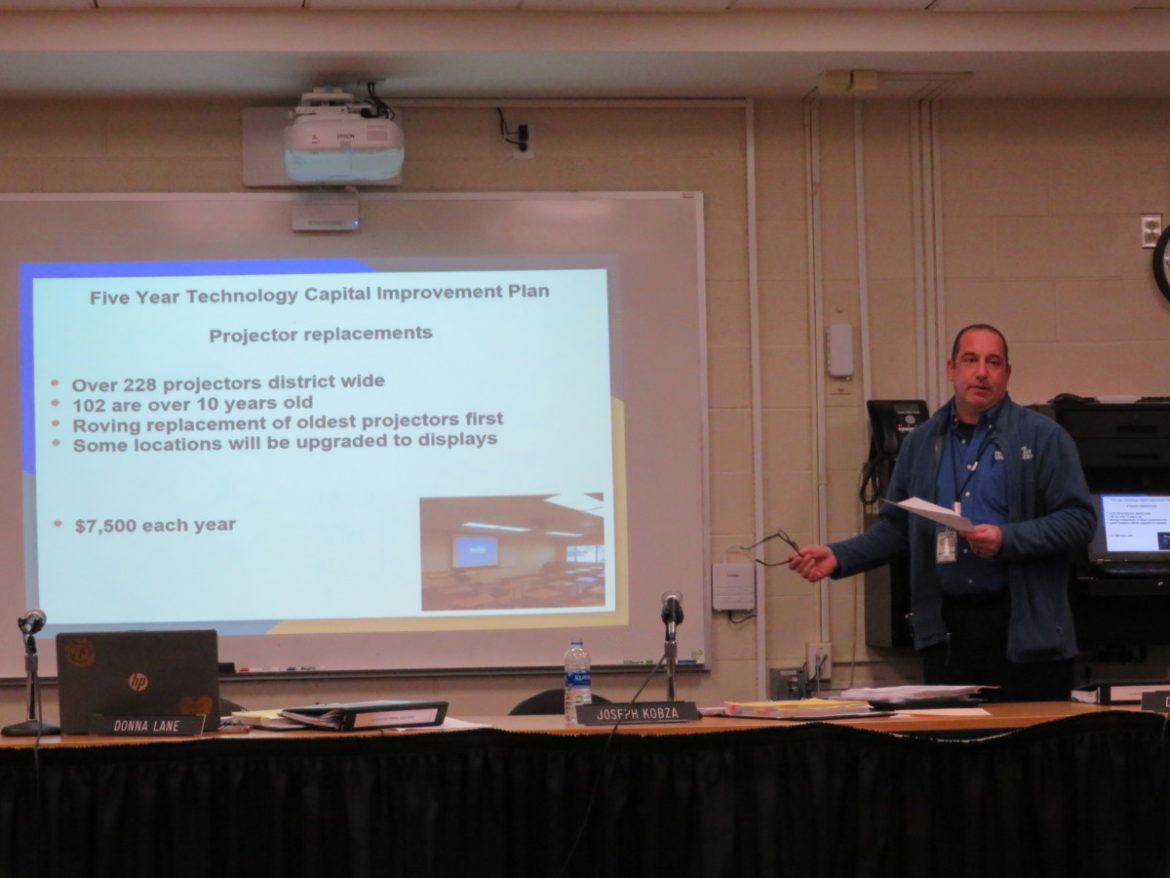 Paul Koorse, director of technology for Monroe public schools, presents a five-year capital plan for technology for the school district during a budget workshop at Masuk High School Thursday.

Board of Education members discussed a capital plan for technology and budgeting for supplies during a workshop Thursday, and a possible increase in the athletic surcharge for Masuk High School sports is on the table this Tuesday, when the board expects to vote on the education budget it will send to First Selectman Ken Kellogg.

Superintendent of Schools Dr. Jack Zamary proposed a $60.5 million budget for fiscal year 2020-21, $3,258,788 or 5.7 percent more than the current $57.2 million budget. Kellogg and Board of Finance Chairman Michael Manjos have expressed concern that such a spending increase would be rejected by voters at a referendum.

Board of Education members have scrutinized Zamary’s proposal with a line-by-line review over the course of several workshops and expect to make adjustments before Tuesday’s vote.

The board will meet at 6:30 p.m. Tuesday in the Masuk media center.

While hammering out a new budget for Monroe’s public schools, educators are working closely with town officials to close a more than $1.5 million shortfall in the current budget.

Monroe’s schools have enacted spending freezes for non-contractual items such as supplies for the past two fiscal years. At a budget workshop Thursday, some principals said it is starting to take a toll.

For instance, Masuk Principal Jacob Greenwood said his school has held off on repairing and cleaning its microscopes. As a result, he said the high school may need to request new ones sooner than it would have with routine maintenance.

Jockey Hollow Middle School Principal John R. Ceccolini agreed the freezes impact kids, though he and Greenwood agreed they will continue to work within the budgets they are given in the best way for the district.

Rather than adjusting the budgets line-by-line, Vice Chairman George A. King III suggested approving a pool of money for supplies and allowing school administrators, who are most in tune with their school’s needs, the autonomy to decide how to spend it.

The budget for supplies was $2.4 million. Board members discussed cutting each line item by 10 percent, with the exception of heat, natural gas and electricity. The total reduction amounts to around $102,000.

The board would also approve a two percent contingency administrators can draw from for line items that need more funding throughout the year.

Though athletic surcharges will be discussed Tuesday, the board started a conversation at its meeting last week. There is a $250 surcharge per student athlete at Masuk with a $1,000 cap for families.

Jeff Fulchino, a board member, said a $50 increase, raising the surcharge to $300, could bring in about $80,000 more in revenue. “This is not necessary to educate our children,” he said of sports.

Dr. Alan Vaglivelo, a board member, said he wants to see what other towns charge.

Steve Kirsch, a Board of Finance member who attended the meeting as a liaison for his board, recalled how participation rates went down the last time the surcharge was raised.

Acting Superintendent of Schools Joseph Kobza said, “we were as high as $390 and saw diminishing returns. We have to find that sweet spot.”

Nick Kapoor, a board member, said even if raising the surcharge results $60,000 more revenue, that is enough to hire or retain a teacher.

“I’m just saying it should be on the table,” Fulchino said of the athletic surcharge.

Then he asked about a participation fee for student clubs.

“We tried $150 for clubs and that completely destroyed clubs,” Chairwoman Donna Lane said.

“I don’t want to make cuts,” Fulchino said. “If you have ideas for other revenue streams, I’m all ears.”

Koorse said the plan allows for a five year replacement cycle and avoids massive one time spending requests, while maintaining a level budget request of $150,000 to $160,000 a year.

There are over 228 projectors district wide and 102 are over 10 years old, according to Koorse. He recommends spending $7,500 a year for roving replacements of the oldest projectors first and upgrading some locations to displays.

Every odd numbered year, $12,000 would be spent on network switch replacements. He said most switches are beyond 10 years old. Replacements, which would provide faster network speed, will start in core locations, Koorse said.

Gbps stands for billions of bits per second and is a measure of bandwidth on a digital data transmission medium such as optical fiber. Koorse said the maximum speed of Monroe’s network switches is 1Gbps, while the standard is now 10Gbps.

Every even numbered year, $10,000 would be spent on virtual server hardware. Koorse said many school servers are over 10 years old.

Every year, $7,500 would be spent on classroom display upgrades.

Koorse said $20,000 a year would be spent to replace teacher laptops with $30,000 in year three for additional counts.

He said the oldest laptops in the fleet are six years old and many laptops are using Windows 7, which is end of life. A roving replacement would be done, one grade at a time.

Koorse’s presentation was well-received by Board of Education members, who thanked him for being proactive in putting together the plan.

“It’s maintaining the status quo,” he said. “We want to keep a consistent plan, so we’re not in a position where everything is failing at once. It’s all about stabilizing the budget and getting the most bang for your buck.”