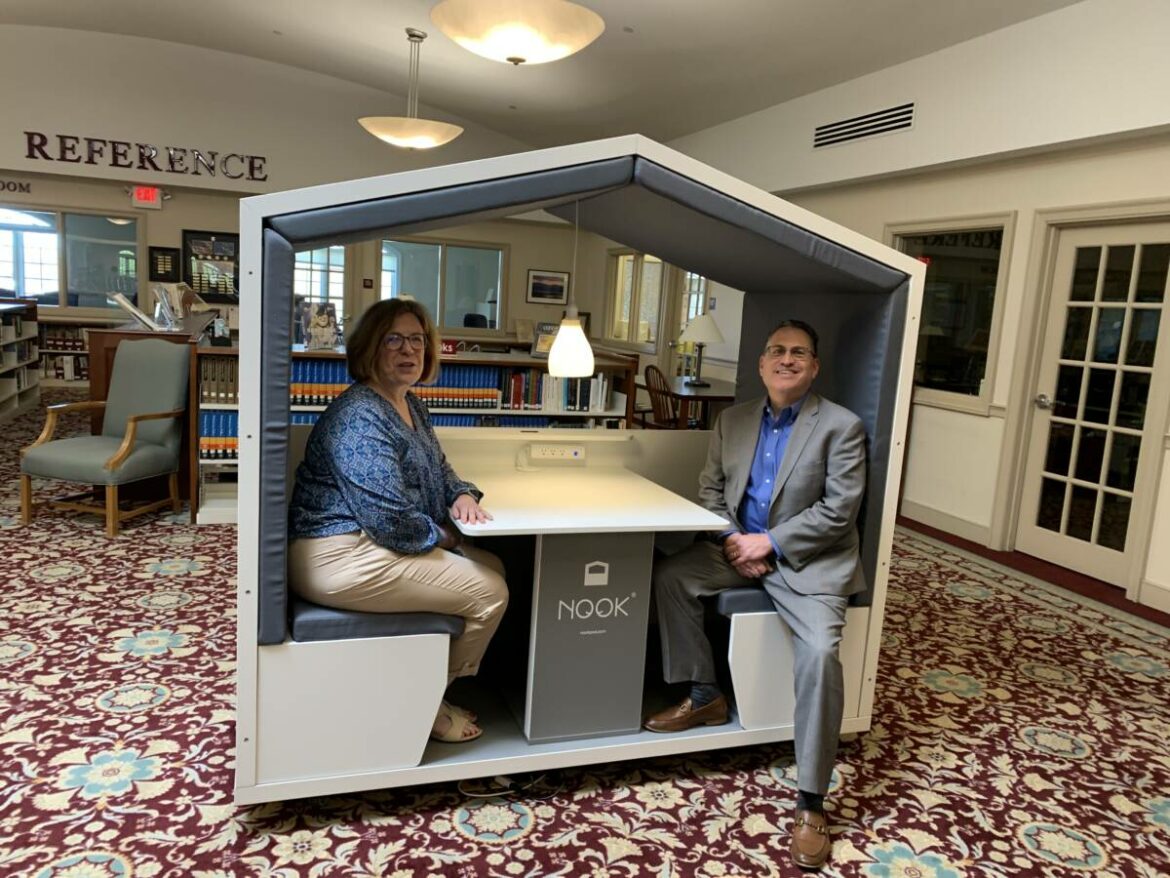 MONROE, CT — A new Nook Study Pod inside Edith Wheeler Memorial Library is a two-seater with a roof. The seats are padded and a pendant light illuminates the small table inside, where a power strip with three outlets enables patrons to plug in their laptops, phones and other electronics.

“We received an American Rescue Plan Act grant of $17,000-and-change and that really helped us with a lot of technology in the library,” she said to the small crowd that gathered. “We updated our laptops. We have touchless water fountains now.” Turning to the Nook, she added, “and this is the most important thing.” 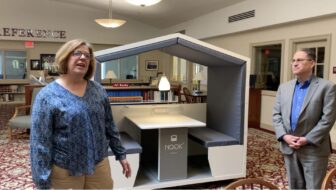 Cignoli said she and her staff wanted to do something that served their existing patrons, and one demand was for a quiet place to study. It would be too costly to put up a wall and construct a new space, so the pod filled the need, according to Cignoli.

The New York Mets recently added a Sensory Nook at Citi Field and other Major League Baseball teams are also adding Nooks to provide quieter spaces in their stadiums.

She said the American Rescue Plan Act money came through the Connecticut Libraries Program and the Institute of Museum and Library Sciences.

“This grant was through ARPA,” said First Selectman Ken Kellogg, who attended the grand opening. “This was a separate pool of dollars targeted for libraries.”

Cignoli said her library worked with the town, including William Holsworth, the town’s community and economic recovery coordinator, to make the project possible.

The first selectman thanked Holsworth, library staff member Lisa Regina and Lauren Obach, the children’s services librarian who served as interim library director before Cignoli was hired. Kellogg said Obach kept efforts to secure the funding on track and the process did not miss a beat when Cignoli took over.

“I want to thank you all for making it happen and hopefully this will be something that our patrons will be able to enjoy for a long time,” Kellogg said.

The Monroe Public Library took up space in the south wing of Monroe Town Hall since moving there in 1972, before the new $6.5 million Edith Wheeler Memorial Library opened in 2007. The project used $750,000 from the Edith S. Wheeler Memorial Trust. The late Wheeler was a generous benefactor to the library over the years.

The late Bill Ehlers served as chairman of the library’s board of trustees during the project and a meeting room of the library is named after him.