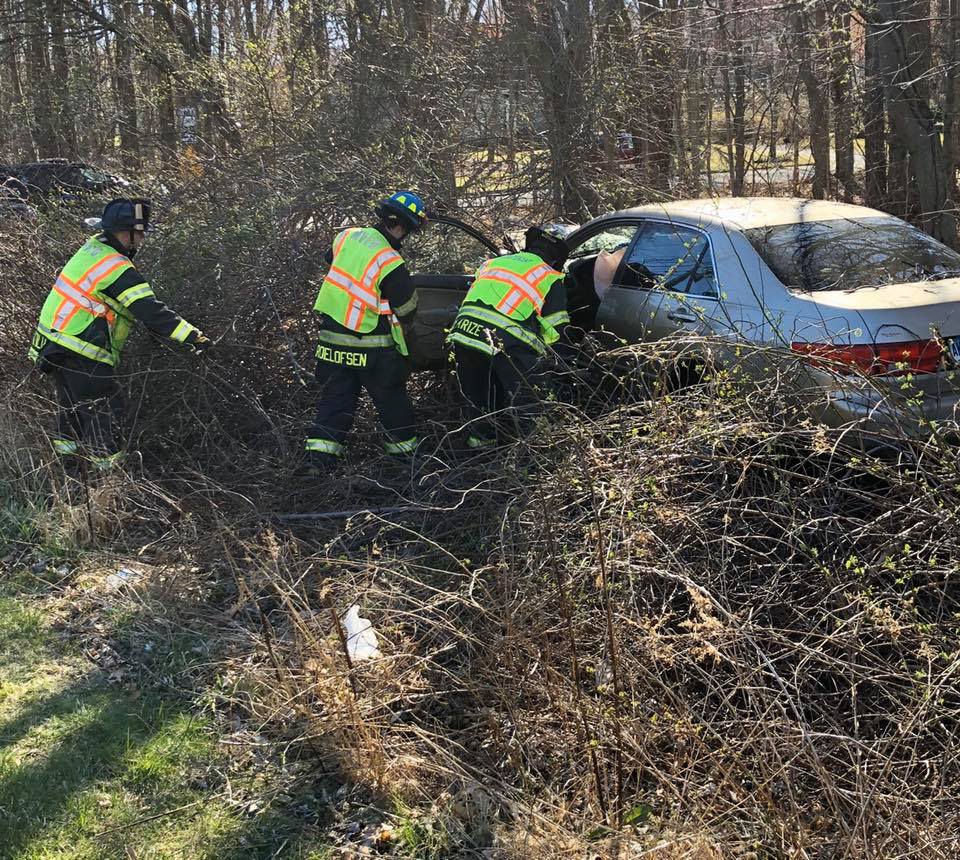 Firefighters untangle a Honda Accord from the brush after the driver struck a tree at Route 111 and Colonial Drive Friday. Monroe Volunteer Fire Department No. 1, Inc., photo

MONROE, CT — A local woman was driving south on Route 111 in a Honda Accord Friday afternoon, when she tried to pass a BMW X3, struck the front driver’s side of the other vehicle, went over the curb and into a wooded area, before crashing into a tree.

Monroe Volunteer Emergency Medical Services personnel evaluated the drivers and passengers at the scene, but police said nobody was seriously injured and all declined a trip to the hospital.

Officers smelled the odor of marijuana on the driver of the Honda, identified as Carmen Lopez, 30, of Moose Hill Road in Monroe, according to police, who said a search of Lopez found a metal grinder with crushed marijuana inside, a metal marijuana bowl and a plastic bag containing a green leafy substance, later identified as marijuana.

Lopez was issued infractions for possession of less-than-half-an-ounce of marijuana and failure to maintain the proper lane.

The other driver, Tracy Parsons, 57, of Old Greenwich, was not at fault for the crash and her vehicle did not have to be towed, police said.

Monroe volunteer firefighters used a chainsaw to help a wrecker free the Honda, which was entangled in the woods, according to a post on Monroe Volunteer Fire Department No. 1, Inc.’s Facebook page.

A Monroe woman told police Saturday she received an email from Home Depot about a credit line opened in her name, as well as several phone calls about store credit accounts she believes were scams.

She called Home Depot to express concern over the fraudulent use of her identity to open accounts and the store notified her all accounts were closed and no money was lost, police said.

She was advised to contact the major credit unions to seek credit security monitoring and to inform her bank of the identity theft.

Another incident of fraud was reported Friday when a Monroe man received a phone call from his bank about a loan he did not apply for. Police said the application had all of his information.

He was advised to contact the major credit unions.

Someone driving a dark colored sedan stole a UPS package from a mailbox on Stanley Road Sunday afternoon and left in an unknown direction of travel, according to a police complaint.

The incident occurred around 2 p.m.