A Bethel man driving a Nissan Rogue allegedly sideswiped a police car with its strobe lights on on Main Street at the beginning of the Monroe Police Department’s DUI checkpoint late Saturday night, leading to a DUI arrest.

Joseph Pantalio, 77, of 40 Huntington Court, was also charged with operating a vehicle without minimal insurance. He was released on $500 bond for a Feb. 11 court date.

Police said the police cruiser was used to mark the beginning of the checkpoint, just south of 234 Main Street (Route 25). The crash occurred around 10:15 p.m.

Pantalio did not perform field sobriety tests to standard, leading to his arrest, according to the report.

The DUI checkpoint was held from the late evening hours of Saturday, Feb. 1, to the early morning hours of Sunday, Feb. 2. Of the hundreds of motorists who passed through the checkpoint, 12 were given standardized field sobriety tests, but Pantalio was the only one arrested, police said.

“The Monroe Police would like to thank area businesses and motorists for their cooperation and support of this checkpoint,” Lt. Stephen Corrone said.

Scammer uses threat of an arrest

A con artist used the fear of an arrest and jail time to obtain a 19-year-old Monroe man’s full name, date of birth and social security number.

Police said the victim received a voicemail saying there was a lawsuit against him and he needed to call back. When he did, he was told there was an open federal case involving 22 pounds of cocaine found in Texas with his name on it.

He was told he could get nine years in prison for it and that investigators also found 53 bank accounts in his name.

After the phone call, the victim’s mother told him it was a scam and they called police.

The victim was advised to contact his bank, the United States Social Security Administration and his credit card companies to fill out an identity theft form. If he detects any fraudulent activity, he was told to call the Monroe Police Department.

A Sandy Hook man was heading south on Main Street Saturday morning, when his Toyota RAV4 crossed into the north bound lane and struck a Suburu Legacy head on.

The driver, Ralph Ferraro, 65, of 10 Hickory Lane, and the other driver, a male juvenile from Monroe, were taken to Bridgeport Hospital for treatment of their injuries.

Ferraro told officers he was headed to the hospital because he did not feel well, adding he was fatigued and may have fallen asleep before the crash, according to police.

He was cited for failure to maintain the proper lane and operating an unregistered motor vehicle.

A Stratford driver and his passenger were arrested on separate charges Saturday night, after he allegedly ran a Jaguar off the road on Route 111 (Monroe Turnpike) in his Buick LeSabre and the other driver tracked him down.

Michael Onore, 27, of 2182 Barnum Avenue in Stratford, was charged with DUI and failure to maintain the proper lane, then released to the Stratford Police Department on their active warrant for DUI.

His passenger, Kristen Brisch, 31, of 117 Webb Circle in Monroe, was charged with possession of narcotics and violation of a protective order calling for her to stay away from Onore.

A police K-9 searched the Buick and found four folds of heroin, leading to the narcotics charge against Brisch, according to police.

The driver of the Jaguar told police Onore drove him off the road and into an embankment, so he followed him into a CVS parking lot, where they argued.

Onore took off, heading north on Route 111, before both drivers pulled over on the side of the road, police said, adding officers separated Onore and the other man.

Officers could smell the odor of an alcoholic beverage on Onore’s breath and he said he had a couple beers, according to police. Field sobriety tests led to his arrest for DUI.

Police said a full 12-ounce can of White Claw Hard Seltzer was found in the Buick, along with two empty ones and a police K-9 alerted that there were drugs, leading to the search and discovery of the heroin. 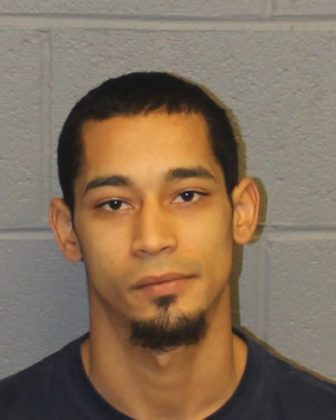 A Bridgeport man turned himself in on a warrant Monday, charging him with enticing a minor by computer and risk of injury or impairing the morals of a minor.

A Birchwood Lane woman told police someone smashed the window of her Kia Optima when it was parked in her driveway, sometime between 3:30 and 8 a.m. on Sunday.

Officers found a large rock on the driveway, which police said was used to bash in the windshield in five distinct locations.

Among the damage, both posts of a wooden Welcome to Monroe sign were snapped and light fixtures on the ground to illuminate the sign were broken.

Police said a metal Aquarion Water Company sign was damaged and one pole of a Lions International sign was snapped.

The ground was strewn with debris from the front and undercarriage of the vehicle.

Police said the last time a resident saw the signs up was at 5 p.m. on Saturday and someone noticed the damage at 8 a.m. on Sunday.