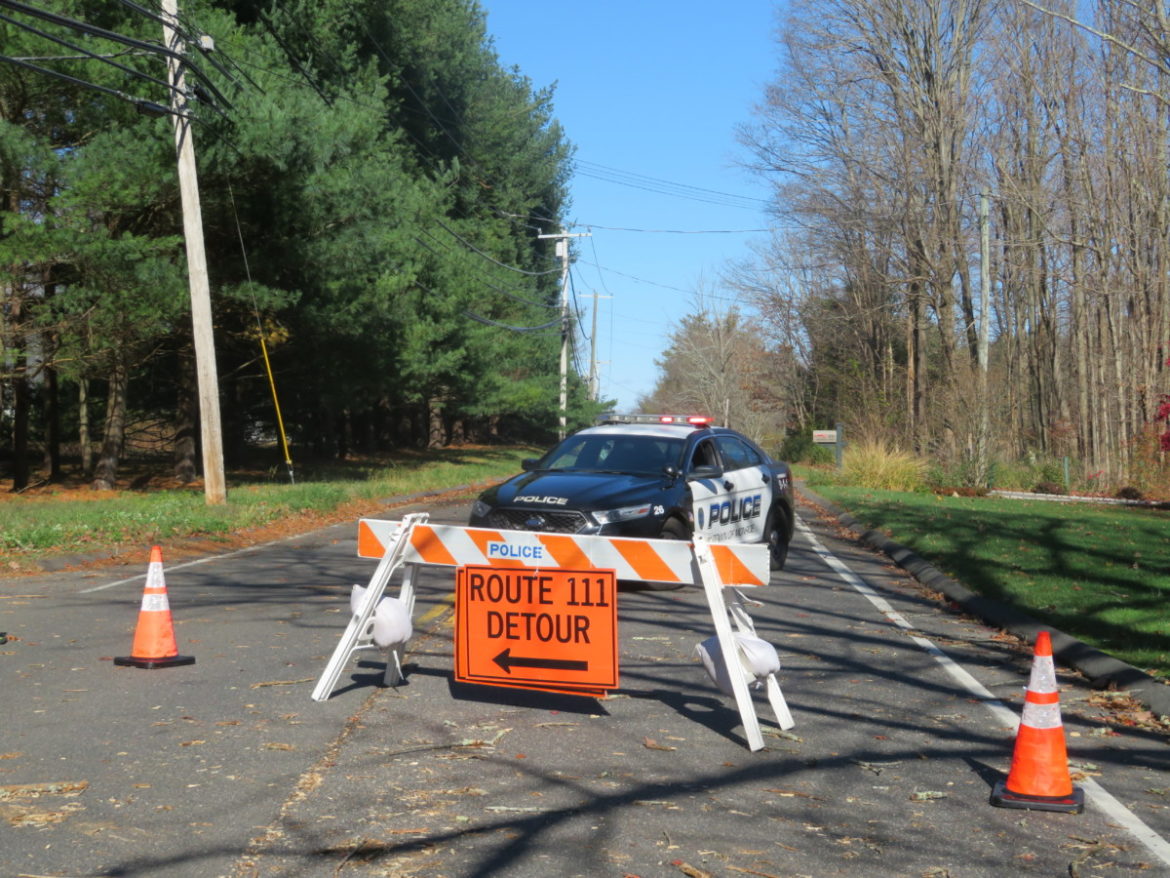 Police are diverting traffic from Monroe Turnpike (Route 111) to a detour on Bagburn Hill Road as Eversource removes trees from wires.

High winds knocked down trees and limbs throughout town, blocking some roads and downing wires. It forced school bus stops to be moved and busses to take alternative routes, resulting in a 90 minute delayed opening for Monroe’s schools Friday morning.

A section of Monroe Turnpike was still closed Friday afternoon, as Eversource Energy removed trees from wires on Route 111. The road is blocked on a portion of Route 111 and a police officer is directing traffic to a detour on Bagburn Hill Road.

“The road is expected to be closed for the remainder of the day,” Lt. Stephen Corrone said.

On Friday evening, First Selectman Ken Kellogg said, “all our emergency services and highway crews have done a great job. We continue to work with Eversource as they prioritize restoration. I have been assured that crews will be working through the night.”

According to Eversource’s outage map, 209 Monroe customers were without power as of 6:12 p.m.

Earlier in the day, Superintendent of Schools Jack Zamary said he was communicating with Bill Phillips, assistance director of Monroe public works, at 4 a.m. “We were hoping to have a full day of school, but needed to move bus stops and to communicate that to families,” he said, “so we were making phone calls to families all morning.”

The superintendent said some parents opted to drive their children to school, which was a help, and, despite busses taking alternate routes, lateness was not a significant problem.

“The good news is everybody got in safely,” Zamary said. “Newtown, Easton-Redding and Ridgefield schools were closed, so we feel fortunate we were able to get everyone in safely with a delay.”

“If you get a snowy winter and you already lost a day in November, it could make for a very challenging spring,” he added.

Zamary said administrators would soon be focusing on getting students home safely in the afternoon.

Tree limbs fell onto Hiram Hill Road and Purdy Hill Road. Firefighters were called to two sections of Cutlers Farm Road, one with a tree limb on wires causing a fire and another with a tree leaning on wires.