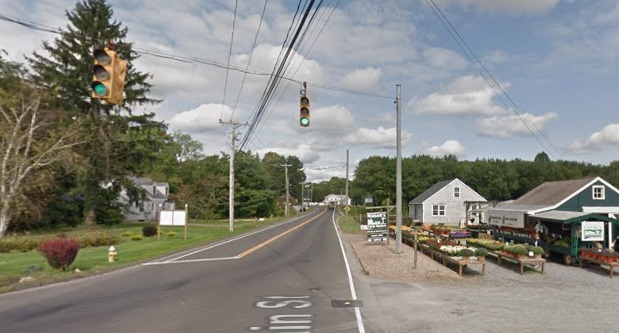 This traffic signal at Main Street and Bradford Drive was installed in 1987, according to Scott Mason, owner of Mason's Farm Market, a business near the intersection.

State officials’ consideration to remove the traffic light at Main Street and Bradford Drive sparked impassioned pleas to keep it from residents and businesses last spring — and their voices were heard. First Selectman Ken Kellogg says the light is here to stay.

Mark F. Carlino, an engineer with the Connecticut Department of Transportation, informed the first selectman of the DOT’s decision to keep the traffic light in a letter Tuesday morning.

“I view this as a compromise and a good compromise,” Kellogg said. “They said, ‘look, we can’t justify the cost for upgrades,’ but they agreed to continue to operate and maintain it.”

The first selectman shared news of the DOT’s decision on the Selectman Ken Kellogg and town of Monroe Facebook pages, where he took the opportunity to thank everyone who came out to public meetings to provide their input to the DOT.

Residents spoke out at a public information meeting on May 29 and Kellogg followed up with a letter to Erika Lindeberg, a DOT principal engineer, on June 11.

“Several residents are concerned about safety, and strongly feel that the relatively low crash rates at the intersection demonstrate the value of the traffic signal,” he wrote. “Communication from the Stepney Fire Company indicated that removal of the signal would negatively impact the home response time of their volunteers. Finally, several local businesses strongly indicated that the removal of the light would have a chilling effect on local commerce.”

The first selectman noted residents’ concerns over DOT traffic counts taken on a winter day in January and over Memorial Day weekend.

“I must emphatically agree with those residents present at the meeting, insofar as these dates would not represent the higher traffic volumes anticipated during other times of the year,” Kellogg wrote. “Several businesses in this area are seasonal and generate higher traffic during the warmer months. Furthermore, I would expect traffic to subside during the holiday weekend.”

Carlino said his letter was in response to Kellogg’s letter and the input from the public at the May meeting, which led to further study by the DOT’s Department of Traffic Engineering.

“The Department has concluded its study and determined that it will leave this traffic signal in place in its existing capacity and configuration at this time,” he wrote. “The
Department will continue to own and maintain the subject traffic control signal.”

Though the traffic signal will be left alone, Carlino went on to explain how DOT studies “found a clear lack of warrant for the existing traffic signal” and the agency could not justify including the light in a project to replace traffic signals with new equipment.

Scott Mason, the owner of Mason’s Farm Market, a business near the intersection, hailed the DOT’s decision.

“It’s fantastic,” he said. “It’s a public safety issue. There’s so much traffic on Route 25, the last thing I’d want is for the traffic light to be removed and for someone to get slammed into on Main Street.”

Mason recalled an accident this summer when a tractor trailer went through a red light and off the road. “Luckily no one got hurt — and that was with a light,” he said.

Mason, who works outdoors all day, said around six school busses come out of Bradford Drive to turn onto Main Street (Route 25). “A school bus would be the worst case scenario of an accident while trying to make a left turn,” he said.

The traffic light was installed by the state in 1987 and coincided with the Bradford Green development, according to Mason, who said the light has served Main Street well over the years. “I think the light is an integral part of controlling traffic on Route 25,” he said.

Mason said the light slows down traffic, while allowing for breaks in the flow so cars and trucks can find openings to enter and leave the roadway.

When the state first considered removing the traffic signal, Mason expressed his concerns before the Monroe Police Commission.

“We felt it was better for traffic safety to keep the light installed at that intersection,” Police Chief John Salvatore said Tuesday, noting how the traffic signal was there for over 30 years.

Mason also spoke with the first selectman and participated in the public meeting at Town Hall on May 29. “It was well attended,” Mason recalled. “People were passionate in favor of keeping the light. I don’t remember one person being in favor of removing it.”

Mason is grateful to town leaders for recognizing the traffic light as a public safety issue that concerned residents.