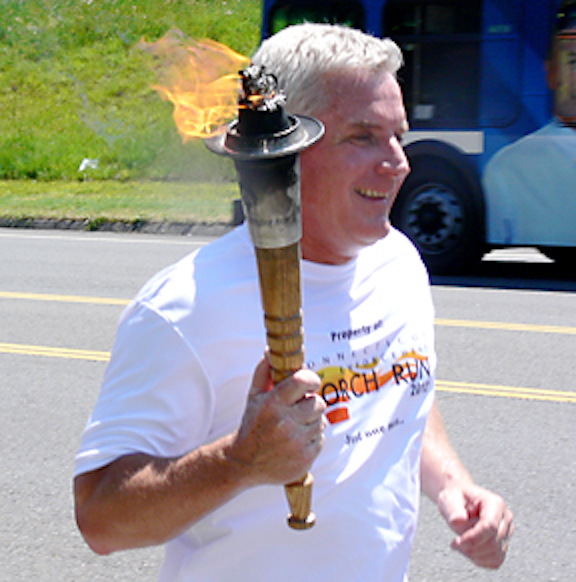 Sgt. Pete Howard always joins his fellow police officers in doing the Torch Run, ushering in the start of the games for Special Olympic Connecticut.

MONROE, CT — Monroe Police Sgt. Pete Howard will go Over the Edge in a fundraiser for Special Olympics Connecticut on Sept. 4, joining other brave participants who, wearing a helmet and harness attached to ropes, will step off the roof of Mohegan Sun and rappel down the 34-story-building.

“I’ve done rappelling before. I was on a search and rescue team for the state for 14 years,” Howard said. “But nothing that high. Only about four or five stories.”

A trainer will give Howard a 15-minute tutorial before the steady drop. 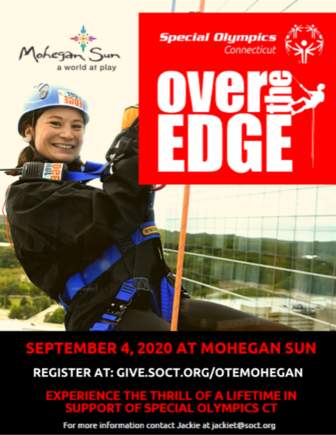 “I control a brake,” he said. “I pull it and start descending and, if I let go of it, it just stops. That’s what they told me.”

Since joining the Monroe Police Department 25 years ago, Howard has been involved in its fundraising efforts to support Special Olympics Connecticut, from the Tip-A-Cop event at Roberto’s Restaurant and Cop on Top to The Plunge in the Park, which has become the top fundraiser.

Howard also participates in the annual Torch Run with other officers to bring awareness of the start of the games.

Police departments from all over the country support the Special Olympics and Monroe’s officers are consistently among the top fundraisers.

“Normally, we’re number one,” Howard said. “Last year, we raised over $50,000 for the Special Olympics, which was the most in the state.”

To sponsor Howard in Over the Edge, click on this link. Under the amounts, type “Monroe Police Department” in the box that asks: “Would you like to credit this donation to a specific fundraiser or team?”

It’s all about inclusion

Special Olympics Connecticut serves athletes with intellectual disabilities, according to its website. Howard said the nonprofit is all about inclusion, while giving athletes the opportunity to compete in sporting events and to be involved in their communities. Aside from sports, it offers health screenings, education and preventative care.

“Athletes who do well go on to compete in regional games in other states,” Howard said. “That’s what the fundraising is for — to give them the opportunity to complete locally and statewide. The best athletes compete internationally in the World Games.”

In 2013, Howard was invited to go to the World Games in South Korea.

“We ran. We did torch runs for two weeks prior to the games,” he recalled. “We took a bus, traveling the west coast of South Korea, to speak in some towns to promote the games.”

Howard represented Monroe, while being among police officers from all over the U.S., as well as countries like Australia and the Czech Republic.

Howard said he doesn’t know who will be there to see him rappel down the Mohegan Sun building in Uncasville on Sept. 4.

“My wife has got a kick out of it,” he said of his decision to participate in Over the Edge. “I’m sure when I get to the edge, I’ll be nervous. Heights don’t bother me much. Confined space does, so as long as I’m outside, I’m pretty good.”

If his first time rappelling down the building for Over the Edge goes well, Howard said, “I’ll do it next year.”