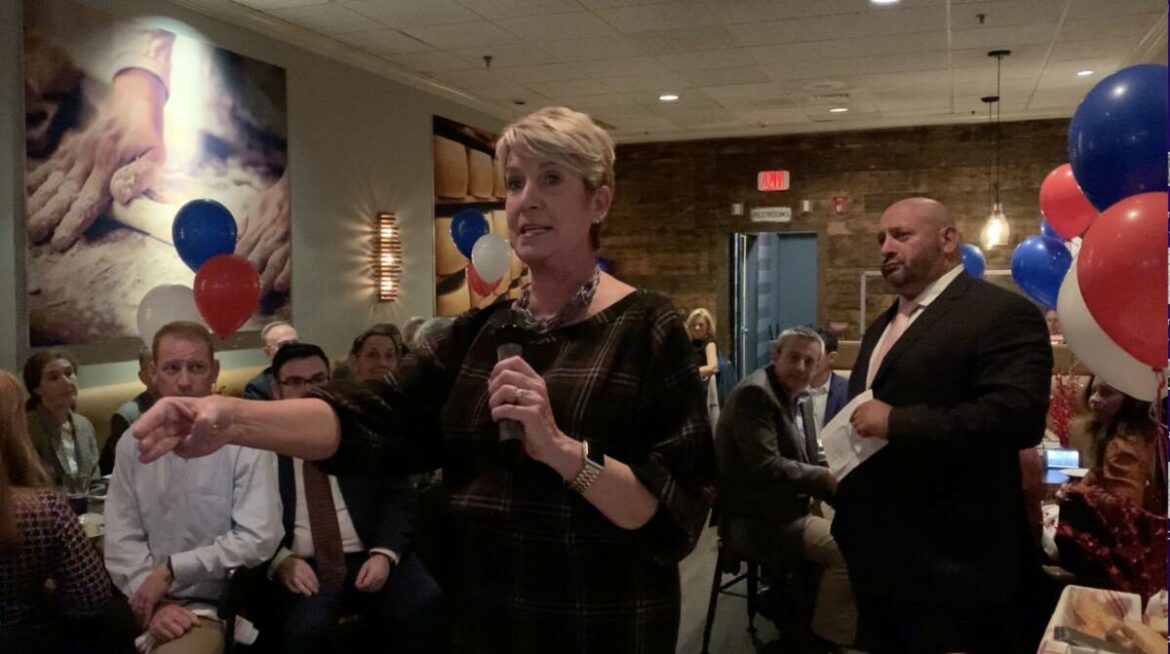 Devlin served as a state representative for Fairfield and Trumbull for the past eight years and intended to run again, until Stefanowski asked her to join him in his second attempt to unseat incumbent Democrat, Ned Lamont.

“I did not hesitate to say yes, because he is truly the right man to lead this state and I couldn’t be more proud to be his partner in taking our state in a new direction,” Devlin told dinner guests, while holding a microphone.

The dining room was adorned with red, white and blue balloons and signs for GOP candidates, including Bob Stefanowski and Laura Devlin and incumbent State Rep. Tony Scott, R-112th. 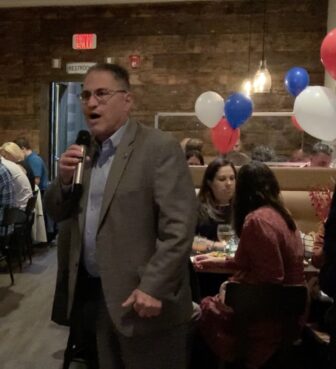 First Selectman Ken Kellogg attended the fundraiser, along with Scott and many of the town’s elected officials serving on boards and commissions. Among them was Ryan Condon, chairman of the Monroe Republican Town Committee, along with Easton’s chair, Wendy Bowditch.

Terry Rooney, a council member in Monroe, served as the master of ceremonies. He asked for a moment of silence for Lt. Dustin DeMonte and Sgt. Alex Hamzy, two Bristol police officers killed in the line of duty.

“These men paid the ultimate price,” Rooney said. “We are the party of law and order and we support police.”

Scott took a moment to present a citation to Ronald Villani for his 28 years of service on the Board of Police Commissioners in Monroe. Villani’s term recently expired.

Rooney spoke of the importance for the Republican Party to appeal to more people and grow its base, while introducing Geoffrey Medeiros, a young man who has been active in politics, interning for Kellogg and being appointed to the Youth Commission in town. Medeiros said a few words.

When introducing the first selectman, Rooney said the town is well run.

“We are doing great things here in this town and it’s not just my administration, it’s everyone here,” Kellogg said.

From seeing projects through to completion to attracting new businesses, Kellogg praised the Republican leadership on the town’s boards and commissions, town employees and volunteers.

Stefanowski and Devlin have campaigned in every corner of the state, hearing from every demographic, according to Devlin, who said nobody feels Connecticut has become more affordable or more safe.

The Stefanowski campaign is running on three core policies: CT First (their economic plan), CT Safe and a Parents Bill of Rights.

At a press conference attended by about 20 police officers on Monday, Devlin said she and Stefanowski signed a pledge to reinstate qualified immunity for police officers, to redefine the use of force standards and reinstate consent searches.

Devlin said the Police Accountability Bill that “had been pushed through” in a special session was “purely political” and “admittedly ill thought out and not complete.”

“It has handcuffed our officers and made it more difficult to be able to do their jobs safely and with confidence,” she said, “and we are 110 percent behind our law enforcement.”

She said the Parents Bill of Rights will “get the government out from between parents and their kids.” “It was received very well across both political parties, certainly among moms,” Devlin said. 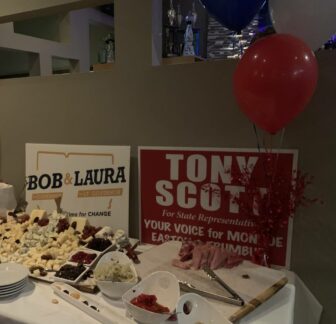 Devlin noted how polls have had Lamont anywhere from six to 15 points ahead of Stefanowski with two weeks left until Election Day on Nov. 8. However, she said her campaign’s internal polling shows a dead heat.

She said it is a winnable race, and urged everyone to come out and cast their vote, so they can win and “bring positive change to Connecticut.”

“We have a red wave coming. I have no doubt,” Devlin said. “It is time for a sea change in Connecticut. You guys can all help make it happen.”

She encouraged supporters to get their friends, family and neighbors to the polls or to vote by absentee ballot if they will be away.

“Bob lost by about 44,000 votes last time,” Devlin said. “He and Amy have spent at least 70 visits in the city of Bridgeport alone, building genuine relationships with community leaders, with faith leaders. We don’t expect we’ll win Bridgeport, but we can get a chunk of votes. We can get a chunk of votes out of all of our cities, because we have engaged with populations who have never seen Republicans before.”

“I want you to know we have been out every day, every night since May,” Devlin said. “We will continue until Election Day. We’re leaving no stone unturned, nothing on the field. We’re gonna bring it home with your help on November 8th.”

One thought on “Devlin: We have a red wave coming. I have no doubt.”