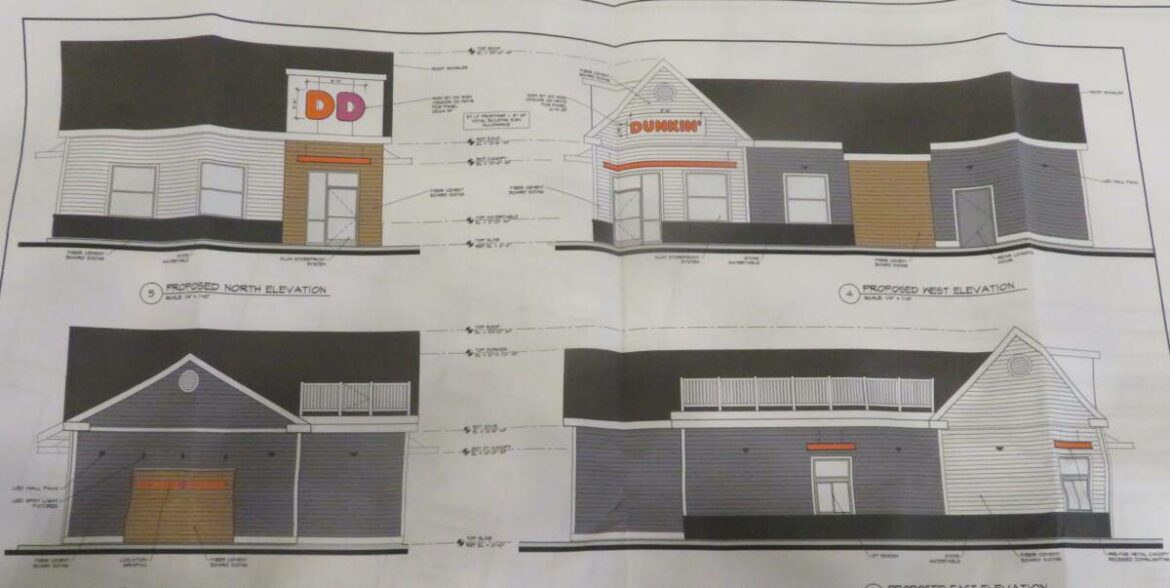 These are drawings of the Dunkin' Donuts approved to be built in front of Village Square.

MONROE, CT — A proposal to build a standalone Dunkin’ Donuts with a drive-thru at 395 Monroe Turnpike, directly across the street from McDonald’s, was well received by the Planning and Zoning Commission last Thursday, though commissioners asked for some revisions to the plan.

If the new Dunkin’ Donuts is approved, it will replace the existing location at the corner of Route 111 and Elm Street once it opens.

Customer traffic would share the same driveway as Village Square Shopping Center and drivers would then turn left into the Dunkin’ Donuts parking lot. The drive-thru would face Route 111.

“The building is fine,” said Commissioner Robert Westlund. “We’re worried it’s like we’re looking at the back of a building from Route 111.”

The side of the building with the drive-thru currently has no signage in an architectural plan, in which the front facade faces the Hartford HealthCare Urgent Care building. Commissioners want a Dunkin’ Donuts sign to be visible from Monroe Turnpike.

Commissioner Leon Ambrosey said more screening is needed, so a row of headlights will not be facing Route 111 at night. He asked the developer to improve the curb appeal.

Seventh Realty LLC has applied for a special exception permit to allow for construction of the 2,107-square-foot Dunkin’ Donuts on the 1.15 acre property owned by Gregory L. and Roy E. Steiner. The building lot was created as part of the plaza in 1987.

Unlike the existing restaurant at 447 Monroe Turnpike, the new one would have a drive-thru. Michael Cavallo, of Dunkin’ Donuts Development, said the drive-thru would have an extra lane, so customers placing mobile orders can be served more quickly.

David Bjorklund, a civil engineer with J. Edwards & Associates, said the drive-thru would have a wrap around lane, so if drivers change their mind, they can easily get out of line.

The anticipated hours of operation for the restaurant are from 4 a.m. to 10 p.m.

The hearing was left open. Attorney Christopher Smith of Alter & Pearson, who was hired by the applicant, said they will consider all of the comments of commissioners and Town Engineer Scott Schatzlein and come back with revisions at the Feb. 17 meeting.

On Thursday night, Bjorklund gave a brief overview of the project, including the storm drainage plan. The business would have an onsite septic system and an enclosed Dumpster. The plan submission also includes a landscaping and lighting plan.

Bjorklund said the site does not need a wetlands permit.

On Jan. 19, the Architectural Review Board approved a letter of recommendation for the building design with no suggested changes.

The Dunkin’ Donuts would use shared parking with Village Square under an existing common parking agreement. Bjorklund said 333 spaces are required for the shopping center, which currently has 457 parking spaces.

Bjorklund said the proposed drive-thru exceeds town regulations, as far as stacking, and complies with Connecticut Department of Transportation regulations regarding drive-thrus on state highways.

An existing sidewalk is in front of the property, running along Route 111. Schatzlein wants the developer to add onto the sidewalk to allow pedestrian access going into the shopping center property.

The developer wants to remove a parking space to allow a WB-50 tractor trailer to move through the property to make deliveries.

Joseph Balkus of VHB, the traffic engineer for the project, said the site would generate a couple hundred trips during peak hours, though it would not be all new traffic, since the existing Dunkin’ Donuts would close.

He said there is no need for widening of the intersection, adding adjusted timing for the traffic signal should allow it to handle the increased traffic.

Cavallo said Seventh Realty is a family business with over 40 years of experience operating Dunkin’ Donuts stores with over 65 locations in Connecticut and Massachusetts — including three in Monroe.

“We’ve been in Monroe for over 15 years, operating stores, so we are not new to the area,” Cavallo said. “We’ve been a proud business here for a while.”

He said they are looking forward to bringing a more modern Dunkin’ Donuts with a drive-thru to the Route 111 side of town.

Ryan Condon, the commission secretary, agreed there is a need for a Dunkin’ Donuts with a drive thru on Route 111. He said his only concern is that drivers do not get stuck in six parking spaces in back of the parcel when the drive-thru is busy.

“I think it’s a super nice shopping center,” Westlund said. “I want to even say it’s a flagship for the town. I have confidence the project will benefit both the owners and the tenants, and the town as well.”

Westlund said his only concern is that drivers are not looking at what appears to be the back of a building from the road.