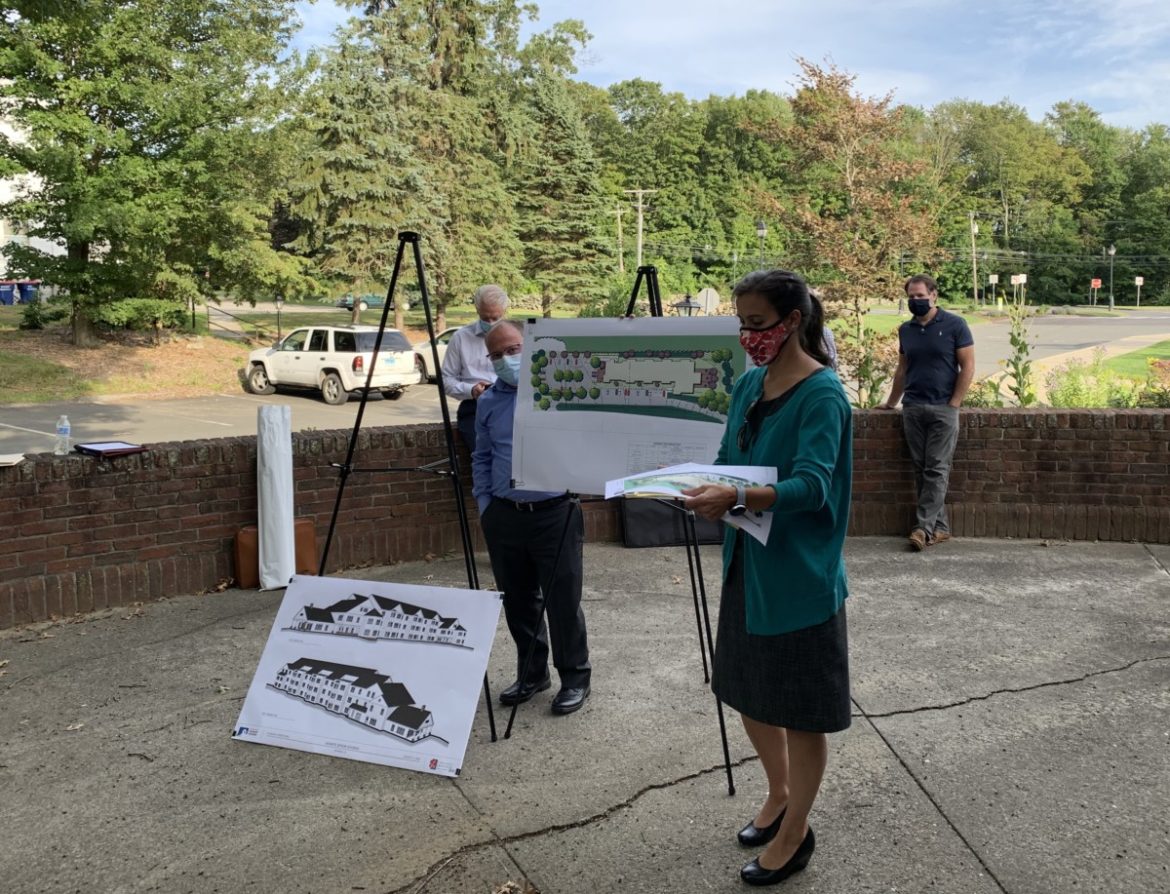 Emily Weckman, a landscape architect with TO Design, a New Britain firm, makes a presentation for affordable, senior apartments at a meeting outside Town Hall Monday.

MONROE, CT — Connecticut Housing Partners wants to construct an apartment building on Main Street with 49 one-bedroom units for residents age 62 and older. The development would be defined affordable housing under Connecticut’s 8-30g statute.

“It’s buffered naturally due to the topography,” said David S. Hoopes, an attorney for CHP. “No neighbors would be impacted by light or noise.”

CHP is still working on the plan, but had to file an application with the town now to meet the deadline to apply for financing from the Connecticut Housing Finance Authority.

The organization will draft a text amendment creating an elderly housing zone, so the 50,000-square-foot facility can be built. Another issue is height. The proposed building would be three stories or 44 feet tall.

William Agresta, the town’s planning and zoning administrator, pointed out that a three story building would be inconsistent with the rest of the town.

“We’re more than happy to work with the town on the regulation,” Hoopes said.

CHP made a presentation to the Planning and Zoning Commission’s Regulations Subcommittee on Monday. 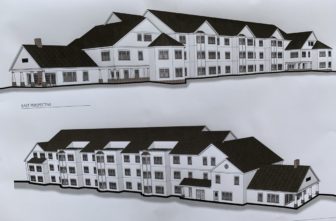 David Goslin, principal of Crosskey Architects, said the building would have architectural touches like gable roofs and bays.

“The building is our first volley over the net,” Goslin said.

CHP would seek a front setback of 40 feet instead of 50 and for the town to allow a 20-foot-setback in the rear of the property.

The apartments’ bathrooms would be handicapped accessible. Gosling said the septic system and the reserve septic system would be under the parking lot, which would have 58 parking spaces.

“The septic is limiting us to 49 units,” said David Bjorklund, a professional engineer and president of Spath-Bjorklund Associates.

“I’m just a little concerned about the density,” said Michael O’Reilly, chairman of the Planning and Zoning Commission. “It seems like a really tight fit to say the least.”

Steve Gulick, director of real estate development for CHP, said the Monroe housing is meant to promote independent living. A licensed practical nurse would be on staff, helping residents with their medications and the direction of their health care, along with a service coordinator.

The building would have a communal kitchen and activity room.

According to the 8-30g statute, at least 30 percent of the housing units must be affordable, while 70 percent of units can be market value to encourage developers to invest in these types of developments.

But in CHP’s application 100 percent of the housing would be defined as affordable. Prospective renters’ annual income must be at or below 60 percent of the area’s median income.

Under 8-30g, an application can only be denied if it would significantly threaten public health or safety — and the burden of proof is on the town.

Connecticut Housing Partners has made $100 million worth of community investments, building 15 developments with a total of 508 units for more than 1,000 residents.

Among its properties are Huntington Place in Trumbull, Fairfield Commons in Stamford, Wilton Commons Congregate in Wilton, and Yale Street Commons in Bridgeport.

One thought on “Developer proposes 49 units of affordable, senior housing on Main Street”