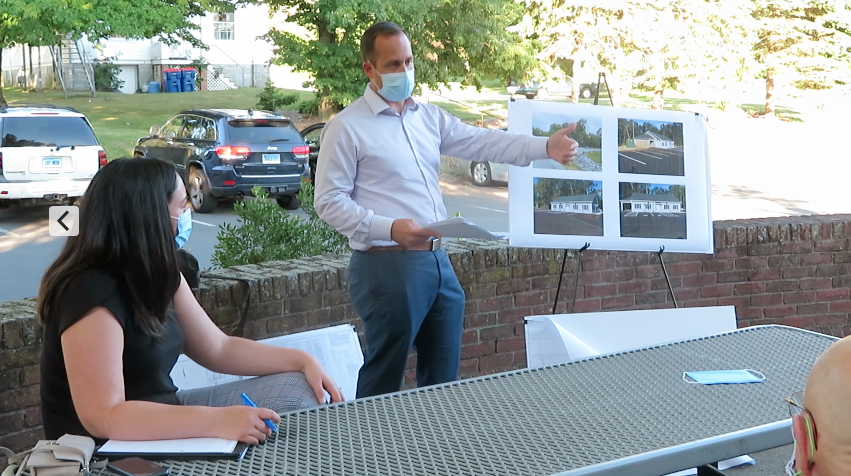 Kevin Solli, principal engineer for Solli Engineering, presents a plan for an office building in the Pepper Street Business Park at an Architectural Review Board Meeting outside Town Hall on Aug. 18. The display shows the All-Star Transportation building it is modeled after.

MONROE, CT — A developer’s plan for the massive restoration of a site in the Pepper Street Business Park is under scrutiny before the Inland Wetlands Commission, but the proposal’s inclusion of a small office building to be constructed by the entrance is off to a good start.

Kevin Solli, principal engineer of Solli Engineering, presented the plan for a 2,360-square-foot office building at an Architectural Review Board meeting last week, and it was warmly received.

Solli said the architectural style and design of the building is modeled after the white All-Star Transportation building on Enterprise Drive, just two properties away.

“We’re really looking to match this exact,” he said. “It’s been built once. We know how to build it. I think, aesthetically, it looks good. It looks good in the park.”

The office building would have tan vinyl siding with white trim, black shutters, gutters, and a standard slate colored asphalt shingle roof. A garage would be used for storage.

“There’s room in front of it to meet the requirement for the loading space,” Solli said.

Initially, the office building would be used as a base for construction on the site. Then it would be used to market the property for future development, according to Solli.

“But it is an actual office building,” he said. “It’s a structure. It’s not a trailer. We don’t want to build something to tear it down.”

Solli also pointed out that the property is in a zone that allows an office use.

The office would have a paved driveway and parking lot and a fence enclosure would go around the Dumpster.

Solli said the lighting plan proposes Dark Sky compliant fixtures. “The International Dark-Sky Association is the recognized authority on light pollution and is the leading organization combating light pollution worldwide,” according to the organization’s website.

“This isn’t something that will be lit up in any major way,” Solli said of the building.

Before any more development can occur on the site, a massive earthworks operation must be completed.

Solli said the previous owner had land use approval to construct industrial buildings there in 2006, but instead left a big hole on the site.

The current owner, who acquired the property in May of 2019, has a plan before the Inland Wetlands Commission to restore the wetlands on the site, in response to violations left by the previous owner, according to Solli.

A site plan application would also need approval from the Planning and Zoning Commission, which will take the Architectural Review Board’s recommendations about the office building into consideration.

To fill the big hole on the property, approximately 1.3 million cubic yards of material will have to be trucked in. That’s about 75,575 truck trips over a 10 year period, according to estimates.

“The overall project is big in its scope and it’s a large endeavor,” he said.