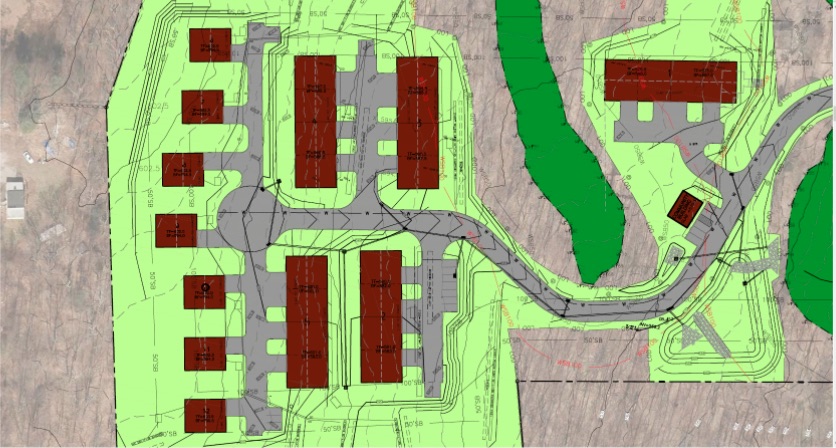 MONROE, CT — A developer wants to build 27 units of age restricted housing at 1271 Monroe Turnpike, almost directly across the street from the Stevenson firehouse.

The Inland Wetlands Commission held a hearing on Sept. 8 and the applicant came before the Planning and Zoning Commission for a zone change Thursday night. Both hearings were continued.

“We feel this is a good area for it,” Larry Edwards, the engineer for the applicant, told the Planning and Zoning Commission Thursday. “We are in close proximity to the existing facility. We’re close to the firehouse.”

High Meadows is an existing elderly housing complex to the south of the site. If a new age restricted housing community is approved, Edwards said there would be no connection between the two. The rest of the surrounding properties are single family residential houses.

The applicant, 1271 Monroe Turnpike LLC, wants to change the 14.9-acre-site from a Residential Farming-2 zone to an ARR zone, allowing a multi-unit age restricted development.

Ryan Condon, the secretary of the Planning and Zoning Commission, explained that the developer would first need to change the zone. Then a detailed site plan for age restricted housing would be submitted for a separate hearing.

Town Planner Rick Schultz said age restricted housing requires at least one resident to be age 55 or older and any resident age 18 and younger could only live in a unit for three months out of a year.

Edwards said no architect has been hired at this point. He submitted an engineer’s drawing of how the housing would be laid out.

The condos would be upscale with the majority being two-bedroom units. Edwards said each unit would have a basement for storage and four parking spaces, which would include a two-car garage and two more spaces outside.

All units would be handicap accessible.

The complex would be served by public water and each building would have its own septic system. 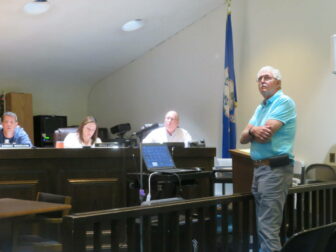 Larry Edwards, an engineer, presents a zone change proposal that could pave the way for 27 units of age restricted housing at 1271 Monroe Turnpike, during a Planning and Zoning Commission hearing Thursday.

During both the Planning and Zoning and Inland Wetlands hearings, Edwards was asked if there would be any blasting to prepare the site for development. He said they will not know until they do more testing on the site.

On Sept. 8, Lois Spence, vice chairwoman of the wetlands commission, asked, “is there anyway you could do it without blasting?”

“I don’t know until we’re on the site,” Edwards replied. “I would like to avoid it, but it’s hard in New England to go down eight feet without hitting some rock.”

“I’m concerned over blasting and possible damage to my place,” Erich Tusch, a neighboring homeowner on Highland Dive, said during the public portion of the hearing.

He asked that the commission do the research to ensure blasting does not damage neighboring properties.

Residents who spoke during the Planning and Zoning hearing Thursday also worried about blasting.

An Old Zoar Road resident expressed concerns over blasting and the potential for septic tanks of the seven detached condos contaminating people’s private wells on her street.

Edwards said the entire property slopes to the east, so there is no concern about area septic systems, because everything flows toward Route 111.

Debbie Dragonetti, another Old Zoar Road resident, said the houses on her street are old, so she would be concerned over blasting. But she did not oppose the application.

“I don’t think the zone change would be bad at all,” she said. “I think it would be a good thing that would help keep the area on the quieter side once the work is done.”

Joe Delvecchio, who lives near the site, wondered why the developer chose the property for age restricted housing when High Meadows is already next door. He also asked what the cost is for a unit, but Edwards said that information is not available yet.

“We want to know the effect on property values in the immediate area,” Delvecchio said. “We just moved in for a quiet tranquil place.”

Condon said an assessment of the impact on property values is something that would come up during the hearing on a site plan.

He also said there should be no concern over the proliferation of age restricted housing in town, because of a cap that only allows 10 percent of Monroe’s housing stock to be age restricted.

Requirements of an ARR

Schultz told the commission the criteria members should consider when deciding on the zone change application.

“You’re wearing your planning hat,” Schultz said. “You have to determine if this is in the best interests of the neighborhood and the town as a whole.”

Among the criteria, he said commissioners must identify surrounding land uses, and assess whether the zone change is consistent with the town Plan of Conservation and Development.

Schultz noted how providing different housing opportunities is a big part of the plan. He added the necessary infrastructure must be available and the property must be able to accommodate the development.

He also said commissioners must identify any land or natural resource considerations, such as wetlands.

Schultz said spot zoning is not an issue, due to the large size of the property.

“There’s a large amount of wetlands on the property,” Edwards said, adding his client is keeping all of the development out of the wetlands.

On Sept. 8, Edwards and soil scientist Steven Danzer made a presentation to the Inland Wetlands Commission.

“There will be no direct impact or alteration of the wetlands with the development,” Edwards told the commission.

The applicant proposes to follow the same path of the existing driveway to access the site, and to replace a culvert beneath it, which connects two water systems.

An existing house on the property, which is abandoned, would be demolished, according to Edwards.

The drainage plan includes piping and storm water basins. Edwards said storm water runoff from all impervious areas would be collected, treated and discharged in a system with a hydrodynamic separator and standard water quality basin.

“It’s a dual system that provides double treatment of the runoff on the site, before it returns to its natural wetland discharging place,” Edwards said.

Edwards said there is no established watercourse out of that area, so water will have to be piped back into the wetlands.

Construction of the first 1,000 feet of the 1,200-foot-long access driveway would be buffered along the portion in the upland review area. Plantings would also include a rain garden.

The driveway would lead to a cul-de-sac.

As part of the application, the developer is proposing to grant a conservation easement to the town, protecting a portion of the property from future development.

Vice Chairwoman Lois Spence expressed concern that all the drainage would be taken away from Wetland 1 and wondered if there is a way water could be directed there, so it receives some hydration.

“I don’t see a reason why we can’t,” Edwards said.

Erich Tusch, of Highland Drive, expressed concerns over any drainage going onto residential properties nearby.

“There won’t be any discharge in the direction of High Meadows whatsoever,” Edwards said.

Spence reminded the applicant to submit language for the conservation easement to the commission. She also noted how Danzer said there would be a considerable elimination of some forest habitat.

Spence asked if things could be done to replace some of the wildlife habitat that would be lost.

Danzer said there would be a considerable amount of vegetation within a 50 foot wetlands buffer, leaving little room for plantings.

“There would be some room for habitat for smaller animals,” he said. “I was just being honest and objective. There is going to be a decrease of upland habitat.”