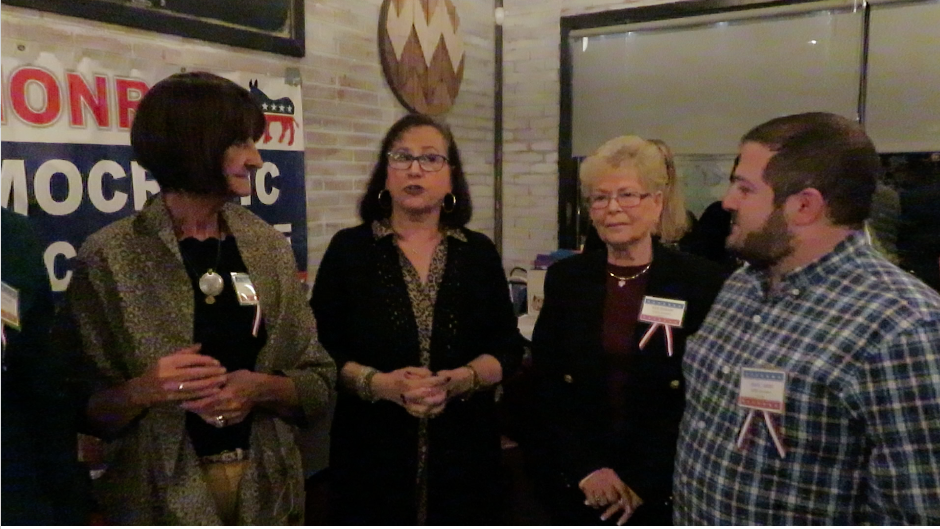 Town Democrats are running a diverse slate of candidates this November with the goal of winning a majority on the Town Council and flipping the treasurer’s office from red to blue.

Democratic Town Committee Chair Patricia Paniccia said it is unfortunate that First Selectman Ken Kellogg, the Republican incumbent, faces no challenger this election, but she expressed excitement about her party’s Town Council candidates.

“These people are the ones who really make the policy and make the decisions for the town of Monroe, more than the first selectman. It rests with them,” she told supporters at a gathering at Monroe Social Wednesday night.

Republicans, who hold majorities on every town board and commission, have held a six-to-three majority on the Town Council for many years, but this year Democrats are running a full complement of six candidates. 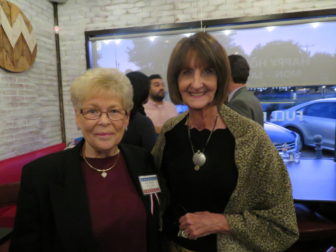 Sue Koneff, left, a former registrar, is running for the Town Council with incumbent Dee Dee Martin, right, in an effort to swing the majority of council membership to the Democratic side of the aisle.

“So if you want to have more of a voice in town and what happens and the policies, these are the people you have to support,” she said of the Democrats’ slate, “and they can’t get elected without our help.”

Paniccia urged those in attendance to go to the polls on Nov. 5, to knock on doors and to get all of their friends and relatives to vote. 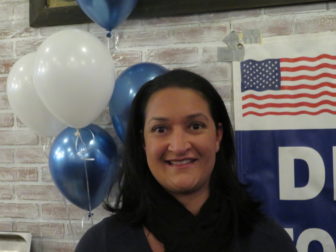 Christa DeLeo is a Democrat challenging incumbent town treasurer, Pat O’Hara, who is a Republican.

“We know she’ll be great,” Paniccia said of DeLeo. “She knows a lot of people in town and we’ll be pulling those people out and supporting the rest of the ticket.”

On Wednesday, Paniccia asked the Democrats’ Town Council candidates to gather around her.

“This is a fantastic slate, mixed of newcomers,” she said. “Spencer hasn’t been involved in politics yet and he is stepping forward, because he loves Monroe and he wants to make a difference.”

“Dee Dee is our longest serving Town Council member and Jen and Jason are both incumbents and are running again,” Paniccia added. “And Sue, who’s been on the Democratic Town Committee, she’s the vice chair. She’s also a past registrar of voters and is stepping up to serve even more people as a member of the Town Council.”

Kansky was not able to attend Wednesday’s event. She is a former Town Hall employee who had served for two terms on the Town Council and ran for first selectman in 2011.

“I’m excited about the candidates,” Martin said. “We have a wonderful blend of experience. Spencer Wesley is 27, a Masuk grad who was born and raised in Monroe. He brings new ideas and Phyllis has forgotten more than most people know about Monroe. She just brings a lot of history.” 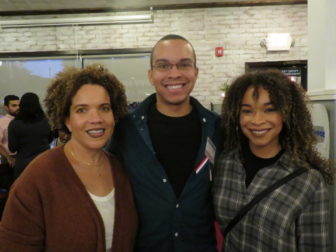 Spencer Wesley, a Democrat running for a seat on the Town Council, is flanked by his mother, LoriAnne, left, and his sister, Taylor Anne, right.

Wesley graduated from the University of Connecticut when he was 22 and enlisted in the Army, where he served for two years. He is now in the Army Reserve.

He said the condition of Cottage Street, where his family lives, is poor. “After the last election, they didn’t do anything about it,” Wesley said of the town’s Republican leadership. “They don’t feel the need to fix our roads, because they’re always going to get the vote.”

If elected, Wesley said he will focus on infrastructure, education and controlling spending.

Lauren Gray, a representative of U.S. Rep. Jim Himes, D-4th District, was a special guest at Wednesday’s event, where people could meet the candidates and make a donation if they chose to.

“It’s great to be here and support good candidates and see this great energy in Monroe,” Gray said. “They are qualified candidates, ready to lead.”