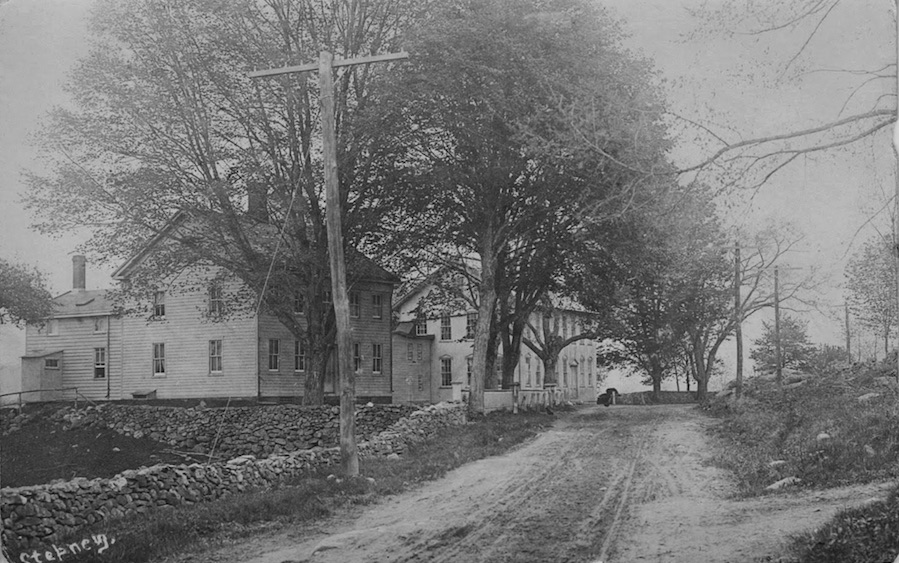 Turney Shirt Factory, the white building with a fence in front of it, stood before Route 25 was paved.

MONROE, CT — Long before Victorinox Swiss Army relocated its headquarters to Monroe in 2007 and Walmart withdrew its plans to build a store nearby, the property on Victoria Drive was home to a men’s shirt factory, a dairy farm and a children’s camp along the Pequonnock River, where a freight train rolled through.

Now that the Planning and Zoning Commission is reviewing a proposal for a commercial delivery van facility on the former “Walmart property” at 10 Victoria Drive, here’s a look back at the history of the acreage off Main Street.

Interviews with Monroe Historical Society historian Kevin Daly and railroad enthusiast John Babina, a review of “The Turnabout at Turney’s” written by Marven Moss, and the Commemorative Biographical Record were all used to piece together the site’s earlier days.

Daly remembers a gas station where Victoria Drive is now, but other uses preceded it.

Willis Turney, a tailor who grew up in Stepney, went on to start his own shirt manufacturing company there around 1855.

“His public-spiritedness led him into active public life, and he was honored by his fellow citizens with election to office in more than one capacity,” according to the Commemorative Biographical Record.

Turney was postmaster for the town during President James Buchanan’s term, from 1857 to 1861, and he served as Monroe’s representative on the state legislature in the 1870s.

In 1875, Turney’s daughter, Henrietta, and her nephew, John Eastwood, took over the shirt manufacturing business.

By the 1890s and early 1900s, the Turney Shirt Factory had grown to 50 employees. Among its clientele were the John Wanamaker department store chain and U.S. President Grover Cleveland, who bought his underwear from Turney’s. 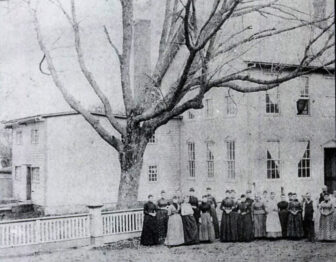 The staff of the Turney Shirt Factory pose for a photo in front of the business.

The Horowitz family later moved the factory building across the street and converted it to a mail-order house with a barber shop inside, which was run by the Sciortino family of haircutters, notably on Sundays, according to Marven Moss.

“The next occupant was the Big Y Feed and Grain Store and finally Pernek’s Cabinet Shop took over a number of years before the building burned down in 1985,” he said.

The Big Y Feed and Grain Store has no connection to the well-known supermarket chain. 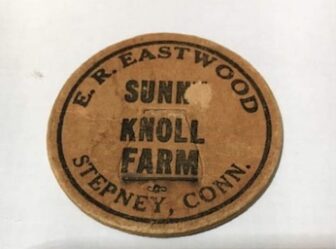 While running the Turney’s Shirt Factory, Eastwood lived in the house near the original location, where he raised a family. When the factory was moved across the street, Elbert Randall Eastwood, one of his sons, started Sunny Knoll Farm there, according to Daly.

Daly said Elbert and his wife Genevieve built his house where the factory had been.

The dairy farm stretched from Main Street to the east, across the tracks and the Pequonnock River, almost to Cutlers Farm Road.

Elbert died in 1933 and the Jewish Community Center, which used to be located on Park Avenue in Bridgeport, decided to open the JCC Country Day Camp on the Monroe property in 1949, according to Daly.

“Foreseeing an urgent need for rural camp facilities,” The Jewish Community Council donated $50,000 toward the purchase of the 55-acre site in Stepney.

“It expanded year after year,” Daly said. “They added cabins along the Pequonnock River, had two baseball fields and two pools — a bigger and a smaller one to teach kids how to swim. It even had an old fire truck donated by the city of Bridgeport that the kids used to play on.”

The fire truck was a gift from Mayor Samuel J. Tedesco, according to a June 23, 1963 article in the Bridgeport Sunday Post. The camp also had a zoo with 50 animals.

Daly said the camp, which had over 420 campers, remained open, at least until 1977 when the newspaper archive for the Bridgeport Post ended, and probably into the early 1980s.

A freight train rolls through 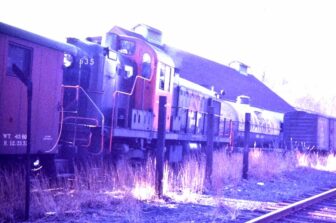 A freight train stops at Trumbull Lumber in the late 1950s. Photo by Peter McLachlan

John Babina, a former Monroe resident, remembers visiting the JCC camp in 1956 when he was on the Orcutt Boys Club baseball team, while growing up in Bridgeport.

“I was swimming in the hole with the team after playing baseball,” he recalled. “I was excited to see a couple of boxcars go over the Monroe town line. Agway and Big Y were still getting feed grain and seed on the Monroe side of the line. Then the train went over the line to serve Trumbull Lumber and Rural Gas. Then later, when we moved to Trumbull, I would buy food pellets for my rabbit at Big Y.”

The camp was along the Pequonnock River and Babina said the train tracks split the land. It is now a part of Rails to Trails, he added.

Babina said the direct line to Bridgeport going south was cut in 1940, so the train came from Bridgeport via the Derby extension, going past the Stevenson Dam and on to Botsford.

When the freight was released at Botsford, the train continued on down to Stepney Depot for Big Y and Agway and then over the line into Trumbull Lumber and Rural Gas, not far from the camp. He said the Botsford to Stepney portion of the line stopped running in 1963.

3 thoughts on “Delivery vans? Victoria Drive area once had a freight train”