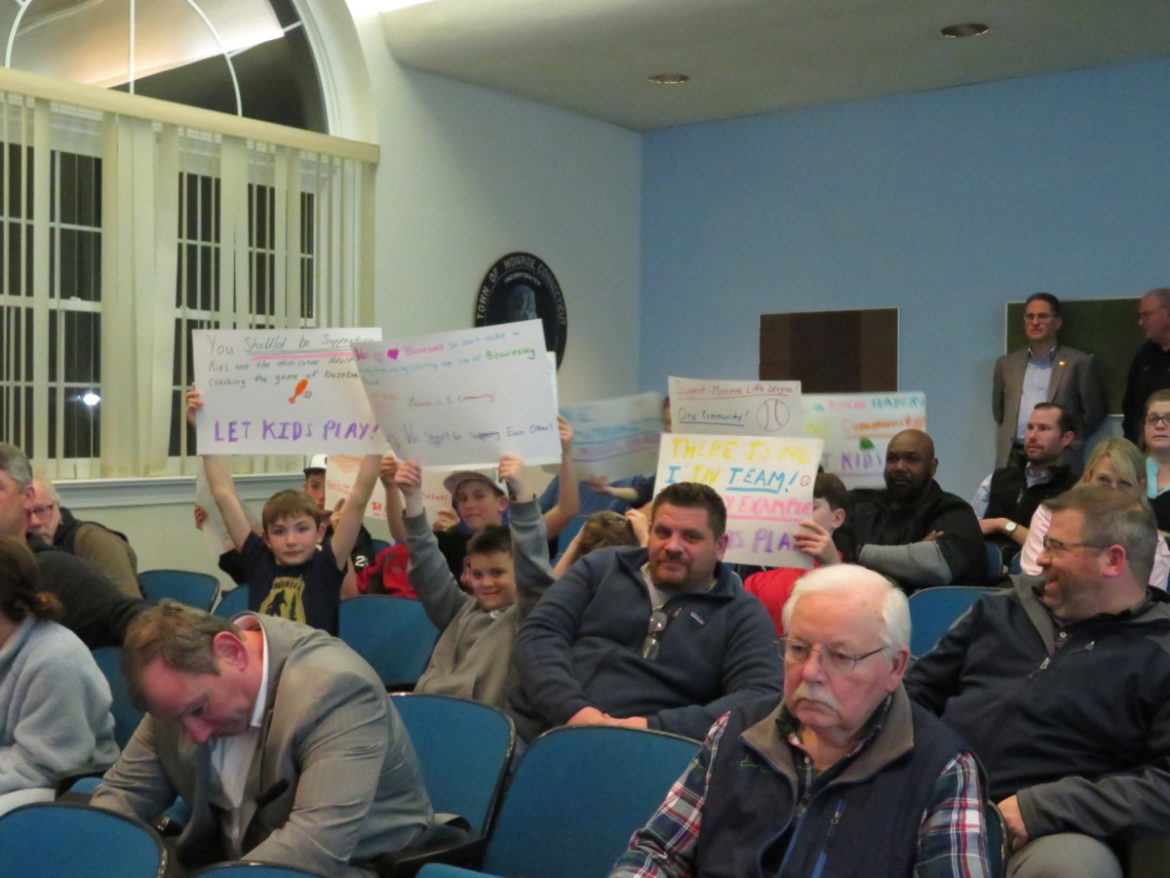 Little League Baseball players showed the Planning and Zoning Commission their support for longer weekend hours at Beardsley Field during a hearing on March 5.

MONROE, Conn. — Monroe Little League wants to expand its Sunday hours at Beardsley Field on Cross Hill Road to accommodate its growing Travel League, but during the season, neighboring homeowners want a break from the noise and parking for games to enjoy some peace and quiet one morning a week.

While deliberating after the hearing closed Thursday night, Planning and Zoning Commission members could not agree on what hours they should vote on at their next meeting.

Chairman William Porter sympathized with the neighbors. “They have no time to sit on their porch in peace and quiet with a cup of coffee,” he said of the lost Sunday mornings.

Vice Chairman Michael O’Reilly agreed. “The residents are kind of stuck there,” he said. “They have no alternatives.”

But Ronald Schneider, an alternate who was seated for the application, and commission member Ryan Condon felt more sympathy for the children, who could miss out on playing games without the longer weekend hours.

Little League wants both Saturday and Sunday’s hours to be from 9 a.m. until 7 p.m.

Jeffrey Fulchino, director of Travel Baseball, said the extended hours would allow two of the four Travel teams to play doubleheaders on Sundays, for a total of four home games in one day.

Ryan Driscoll, president of Monroe Little League, said the fields at Beardsley are the only ones available in town with the proper dimensions for league play, which is from April to July 1.

Schneider proposed making the Sunday hours 11 a.m. until sunset and Condon and Domenic Paniccia, an alternate who was seated, agreed.

Porter suggested 12:30 p.m. to sunset, giving the league more time at the tail end. But to any motion that would take away the neighbors’ mornings, he said he was “a firm no.”

O’Rourke was agreed with Porter’s solution.

Then Paniccia spoke in favor of tabling the setting of hours to the next meeting.

William Agresta, the town’s planning and zoning administrator, will draft a resolution for the commission to vote on at their next meeting, which will leave the hours blank, so members can try to reach a consensus then.

The hearing, which had opened in February, was continued to Thursday night. Families showed up with their children, who held up posters urging commissioners to “let kids play.”

Neighbors, who had complained about parking along Craig Drive, trash left behind and noise and expressed concern over the safety of people walking along Cross Hill Road, also showed up.

A petition with 30 signatures opposing the application had already been submitted to the commission.

If Beardsley Field’s hours are not extended, Driscoll said the Travel teams will have no place to go.

“We’ve run out of space for the boys’ baseball programs,” he told the commission. “If we don’t have the extra field space for these games, they might not get played.”

Christina Cascella, of Woodlawn Avenue, whose son played at Beardsley, spoke in favor of the application. She said she lives across the street from Wolfe Park, which allows youth football games to start at 9 a.m., bringing noise from cheering crowds and cowbells along with it.

“I hear the concerts on Friday nights,” Cascella said. “To me, that’s the sound of what makes this town great.”

Dennis Mullin, of Doris Drive, whose two sons play, said he coached baseball and one son missed out on two games one season, because they could not get them in.

Other supporters said they never had problems parking at Beardsley, noted how leagues are always fighting for fields in town, and said extended field hours could help to make up for rainouts.

Tino Modaffari, a Cross Hill Road resident since 1968, said people come to Beardsey and watch a game for two hours and go home, while he and his neighbors are there for games two, three and four.

“I’m against the hours, I’m not against the Little League,” Modaffari said. While walking back to his seat, he looked at boys sitting in the audience inside the Council Chambers of Town Hall and said, “kids, I’ll go to all of your games.”

Driscoll said they talked to neighbors to try to come up with a plan to stagger starts of games to reduce the traffic impact and to limit having two games going on at the same time.

He said Little League’s opening day ceremonies are now at Wolfe Park, so Craig Drive is not impacted by the large turnout.

“We asked the police for noise and parking complaints over the last five years and there was one noise complaint about kids playing baseball,” Driscoll said.

Then Porter held up a flier advertising an All-Star baseball tournament for nine-year-olds that said Beardsley’s parking would be full, but there’s a lot on Craig Drive.

Driscoll said that could have been done years ago and his league will not distribute fliers like that.

He also said they could put signs up asking fans not to use artificial noise makers, such as cowbells and bullhorns, to make it quieter for the neighborhood.

But Modaffari said he does not want to see signs from his property.

Scott Sudora, of Craig Drive, who said he supports youth sports, was critical of the league’s timing in reaching out to neighbors about their concerns.

“I just have a problem with them coming in after hearing there was opposition,” he said. “They know what the problem was.”

Sudora said he and his neighbors just want some quiet on Sunday mornings without hearing a lawn mower prepping the fields at 7 a.m. and cowbells when games are being played.

“We’re looking like the bad guys here and we’re not trying to be,” Sudora said. “We just want to protect our property rights.”

Richard Bulan, of Craig Drive, said he is a longtime coach and believes the kids should have a chance to play. But he added it was hard to hear people at the hearing say nobody is parking on his street and that there is no garbage.

“I can’t have people park on the street for a picnic,” Bulan said. “I would like to relax on a Sunday.”

Ludwig Johnson, of Craig Drive, said games are played at Beardsley every day of the week, right into the evening when residents are eating supper. “We had a little quiet in the morning on Sunday,” he said. “How much do we have to give up?”

But Johnson did compliment Monroe Little League’s president for reaching out to the neighbors and attending a meeting with them at Johnson’s house on Tuesday. Johnson said nobody had reached out to them in the past.

Johnson gave him a list of 11 ways to improve the situation and said Driscoll agreed to some of them. “He seems like a very conscientious, caring guy, who wants to do the right thing,” Johnson said.

Johnson expressed his hope that a town project for two new ballfields at Wolfe Park can get underway within the next five years and suggested the town should do a field usage study.

“Our request is that you don’t approve this,” Johnson said. “I expect Ryan and us will have more talks during the season.”