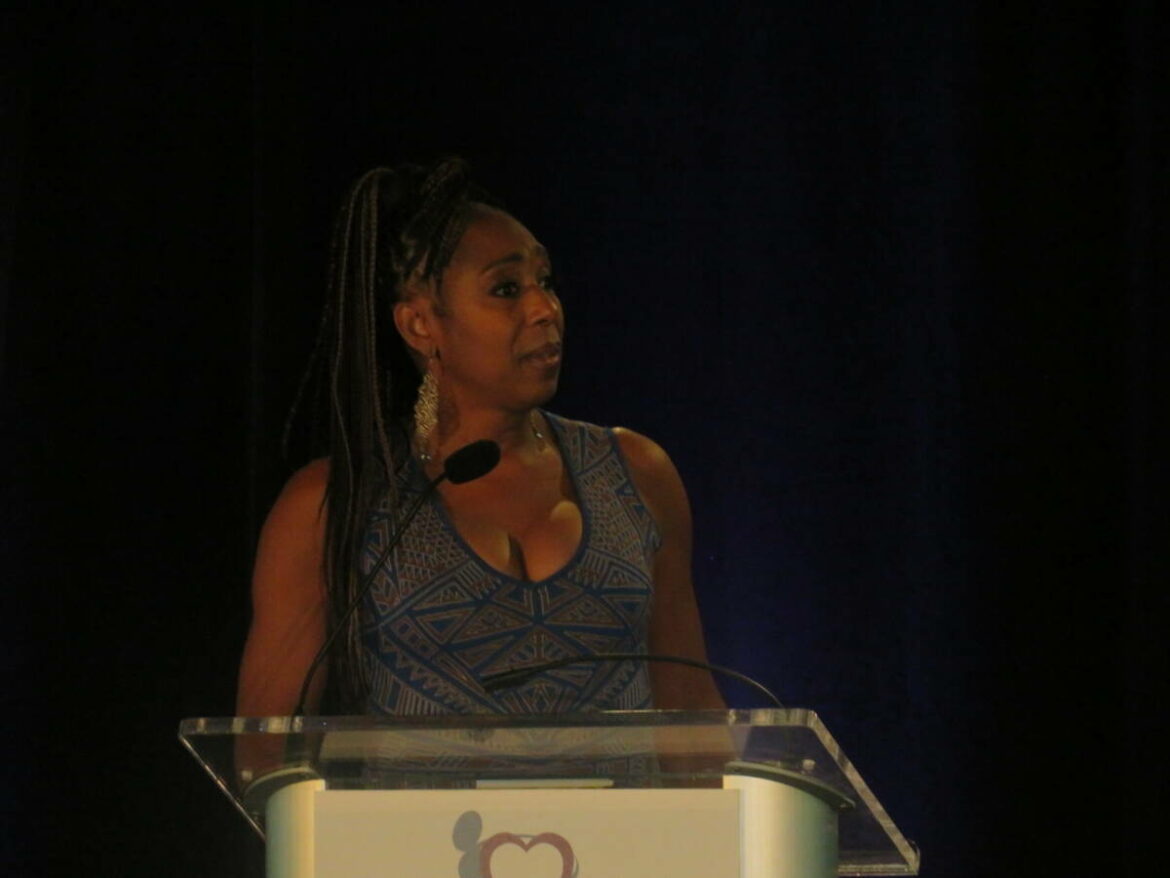 Dawnn Lewis, an accomplished entertainer, shares her story of surviving domestic abuse, as the keynote speaker of The Center for Family Justice's 2021 Speaking of Women event at The Waterview in Monroe Tuesday.

MONROE, CT — Dawnn Lewis emerged from an abusive childhood to become an accomplished actor, singer and songwriter. Growing up with three loving brothers, a grandmother who stood up for them, and teachers who encouraged her to succeed helped Lewis to not only survive, but thrive.

The keynote speaker of The Center for Family Justice’s annual Speaking of Women fundraiser at The Waterview Tuesday afternoon, Lewis shared her story, while praising CFJ for creating the supportive community victims of domestic abuse, sexual assault and violence need to get their lives back.

Last year, Speaking of Women was held remotely at the height of the COVID-19 pandemic. Though face coverings were required, Tuesday’s event was held both in person and online.

“It truly blesses my heart that so many of you are here — that we as a community are able to come together, because it means we all decided to be part of the solution,” Lewis said. “We are one spirit. We have one purpose.” 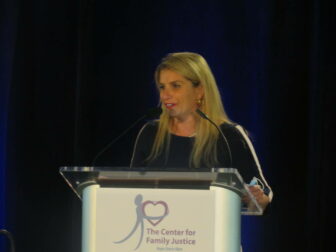 Anna Zap, co-host of the nationally syndicated “Anna & Raven Show” on Star 99.9, serves as master of ceremonies during the 2021 Speaking of Women event at The Waterview in Monroe Tuesday.

The program was led by master of ceremonies, Anna Zap, co-host of the nationally syndicated “Anna & Raven Show” on Star 99.9.

Among the municipal leaders from the six communities CFJ serves — Monroe, Bridgeport, Easton, Fairfield, Stratford and Trumbull — was Monroe First Selectman Ken Kellogg, who introduced Debra A. Greenwood, president and CEO of CFJ.

Kellogg praised Greenwood for “devoting her professional life to helping others” in her 14 years of leading the nonprofit, which “touches the lives of more than 7,000 adults and children each year.”

The center at 753 Fairfield Ave. in Bridgeport delivers a full complement of free, confidential services, from shelter and counseling to legal services, according to Kellogg.

During Greenwood’s tenure, CFJ established Camp HOPE, a mentoring program for children age 7 to 17 impacted by the trauma of abuse, and launched the initiative to build Empower House, a new safe house for domestic abuse victims. 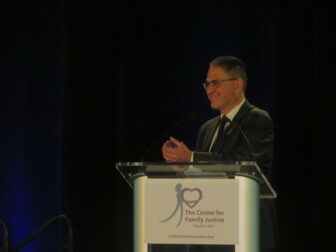 Monroe First Selectman Ken Kellogg speaks at the 2021 Speaking of Women event at The Waterview Tuesday.

“On behalf of our community — and I’m sure in this regard, I can speak for all the communities represented here today — I extend our deepest appreciation to Deb, The Center for Family Justice, its staff, board, volunteers and partners,” Kellogg said.

“Together, you provide our residents with access to these critically important resources,” he continued. “We know the importance of the work that you do, and we thank you for the profound impact you have made in the lives of many of our families.” 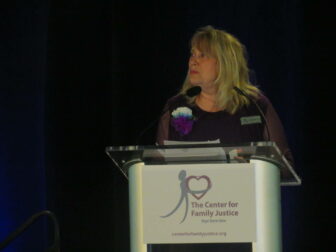 Debra A. Greenwood, president and CEO of The Center for Family Justice, speaks at the 2021 Speaking of Women event at The Waterview in Monroe Tuesday.

Greenwood said there was a 25 percent increase in victims of domestic violence and sexual abuse in the region during the pandemic, when many spouses worked from home. Safe houses were at 122 percent capacity.

Last year, Zapp said there was a 1,400 percent increase in abuse victims having to stay at hotels.

“Center for Family Justice staff is there every single day for victims of domestic and sexual violence,” Zapp said. “It’s a revolving door.”

She said CFJ obtained free legal services for over 263 clients and provided assistance to over 4,500 people who came through the center’s doors. CFJ also offers free hotlines for abuse victims to call.

Greenwood thanked CFJ staff, its board of directors, volunteers, sponsors and the police chiefs and officers who work closely with them.

“Everyone knows the hardest call any officer gets is a 911 call for domestic violence,” Greenwood said. “We are so grateful for law enforcement and their support.”

Greenwood and Kathryn Maiolo, board chair for CFJ, expressed their appreciation for People’s United Bank, the event’s title sponsor, for its long partnership with the nonprofit.

Speaking of Women also included a showing of the “Faces of Hope Video,” in which domestic violence survivors shared their stories and clips and interviews about Camp HOPE were shown.

Rita Bailey, of the Darien Domestic Abuse Council, was the 2021 Speaking of Women Distinguished Honoree recipient.

Dawnn Lewis is known for starring in the 1990’s sitcom “A Different World” and her acting resume includes movies like, “I’m Gonna Git You Sucka.” She recently starred in the Broadway Musical “Tina,” playing the role of Tina Turner’s mother, Zelma Bullock.

Lewis is also a Grammy Award winning singer and was part of the inaugural class inducted into the National Women Songwriters Hall of Fame.

She has enjoyed this success despite a childhood mired by abuse. While growing up in Brooklyn, Lewis, her mother and three brothers suffered abuse at the hands of her father.

As a police officer, Lewis said her father was seen as a hero and someone respected in the community. But at home, he beat his wife and children.

“My mother went to the police several times and said, ‘this is what’s happening in my home,'” Lewis recalled.

But she noted that it was the 1960’s, when women had no voice. Officers said things to her mother like, “if you did what he told you, he wouldn’t hit you.”

With nowhere to turn, Lewis said her mother told she and her siblings they had to love and look after each other, because she had to save herself. “I have to find a better environment for you,” she told them.

One day, when Lewis’s father was at work, her mother packed her things dropped the kids off at the police station and left.

Though Lewis did not see her mother again for nearly a year-and-a-half, she later found out that she lived in the apartment above them, so she could watch over her children to make sure they were okay.

After a month, Lewis said her father decided he could not care for his children anymore, so he tried to split them up in foster homes.

“I made such a fuss,” Lewis recalled. “He couldn’t leave me.”

When her grandmother found out what was going on, she wouldn’t allow the children to be split up. Her grandmother took care of them.

Lewis said the only time she and her brothers saw their father was when they got into trouble and their grandmother called him for discipline.

Lewis became a kleptomaniac, and not a very good one. Whenever she was caught, her father would be called to give her a spanking.

“I’ll call your daddy,” Lewis said her grandmother told her. “Yeah! I get to see my daddy,” she thought, “even if it’s for a beating.”

Dawn of a new day

“What are we doing for our kids? What examples are we making for our kids?” Lewis asked. “Not everyone has someone. There are no words to express how grateful I am for my brothers, my grandmother and my teachers.”

While growing up as the only girl among boys, Lewis said her mother enrolled her in dance classes so she would have something of her own. Then in later years, teachers at her school nurtured her talent for the arts.

“You’re a light. You’re special,” she said of how her teachers made her feel. “They actually got me to like my name. I thought it was boring. My name meant light, the beginning of a new day. There’s no day that doesn’t begin at dawn. They encouraged me with my singing.”

Lewis said children have to be taught more truth, so they can see through the lies that convince abusers they have a right to wield authority over their victims.

She said her brothers survived their abusive childhoods and broke the cycle that makes victims grow up to become abusers themselves.

Despite all she went through, Lewis went on to marry a former NBA basketball player who turned out to be an abuser.

Lewis’s husband was convicted and sentenced to 60 days in jail for assault and slapped with a $500 fine. She divorced him after five months of marriage.

She said abuse victims have to come to the realization that they deserve love, trust and fidelity. Lewis also shared the advice of not harboring anger.

“You’re going to be all right,” Lewis said to the victims trying to break free from abuse. “If I can do it, everybody can do it. Praise God.”

To make a donation to The Center for Family Justice, click here.