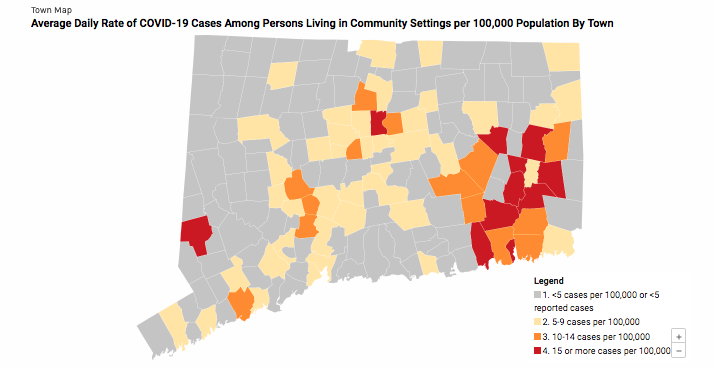 MONROE, CT — Monroe had nine new positive COVID-19 cases in the past week. A few of the cases were part of a catchup by the Connecticut Department of Public Health, according to First Selectman Ken Kellogg. The town’s rate is among the lowest in the state.

The Connecticut Department of Public Health launched a new color-coded COVID-19 alert system for every municipality. It is based on the average daily case rate per day, per 100,000 population for the last two weeks.

Gray is less-than-five cases, yellow five to nine, orange 10 to 14 and red is 15 or more cases, according to the first selectman’s update issued Friday. He said Monroe’s current average daily rate per 100,000 population is 2.9, so Monroe is gray on the DPH map.

“The new weekly alert level is also accompanied by municipal-level guidance on recommended actions,” Kellogg said. “Any municipality in the red-level alert category will have the authority to scale back to the state’s Phase 2 guidelines. Any such community-level decisions would be in coordination and consultation with state and local health officials and emergency management.”

The state’s overall test positivity rate has increased to a one-week average of 1.6 percent, Kellogg said, adding, the state remains in the “low” category.

The map will be updated weekly and the most recent one will be posted here. Since the pandemic began, Monroe has had a total of 166 cases, according to DPH.