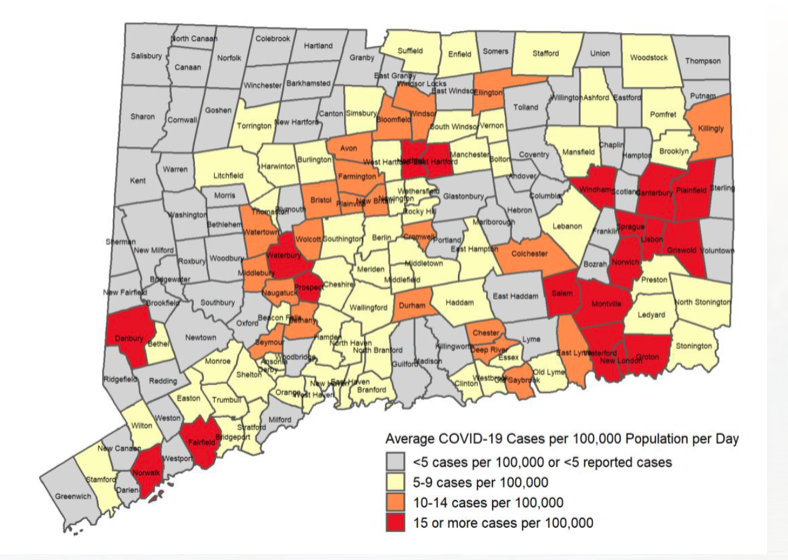 MONROE, CT — Coronavirus infections are rising steadily in the state, and the tide of new cases elevated Monroe from a gray to a yellow alert on the Connecticut Department of Public Health’s COVID-19 map. The next level is orange and red is the highest.

“The numbers are definitely going up,” First Selectman Ken Kellogg said Friday afternoon. “We’re not red, but based upon the trend, we are heading in that direction. But we’re not alone.”

The DPH map is based on a rolling two-week-average of the case rate per 100,000 people. Gray, which is less than five cases, is the lowest. Monroe was there last week, but Kellogg said Monroe joined most neighboring towns in rising to yellow, or five to nine cases per 100,000, this week. 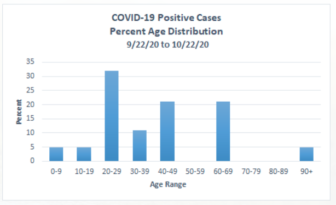 The first selectman said it is human nature to relax, especially around family and friends you know. However, he encourages residents to wear a face covering, social distance and regularly wash their hands whenever they are around someone they do not live with.

“We strongly encourage everyone to remain vigilant,” Kellogg wrote in his weekly update. “In general, contact tracing has confirmed that many cases are the result of smaller, informal gatherings with non-household individuals. It is still extremely important to continue following the guidelines regarding masks and social distancing.”

The state of Connecticut’s overall test positivity rate rose again and is averaging over two percent. As of Thursday, Oct. 22, a total of 181 cases were reported in Monroe.

Kellogg said the state is constantly revising test results as it gets more information. As a result, it sometimes determines a positive test in another town should have been counted for Monroe and vice versa.

In Monroe, a small number of households account for six of the newly reported cases or 40 percent, according to Kellogg. He also said some of the cases newly reported by DPH this week are from earlier test dates — August and September, now included due to ongoing data corrections.

“We have been advised that college students are intended to be reported in the town in which they are currently living,” Kellogg said of another factor. “Monroe totals may include students who were living on campus, but have since returned home to Monroe.”

The first selectman and Health Director Nancy Carol Brault made a graph of the number of Monroe cases per week, based on the date of the test, to give a more accurate picture of how the virus is trending.