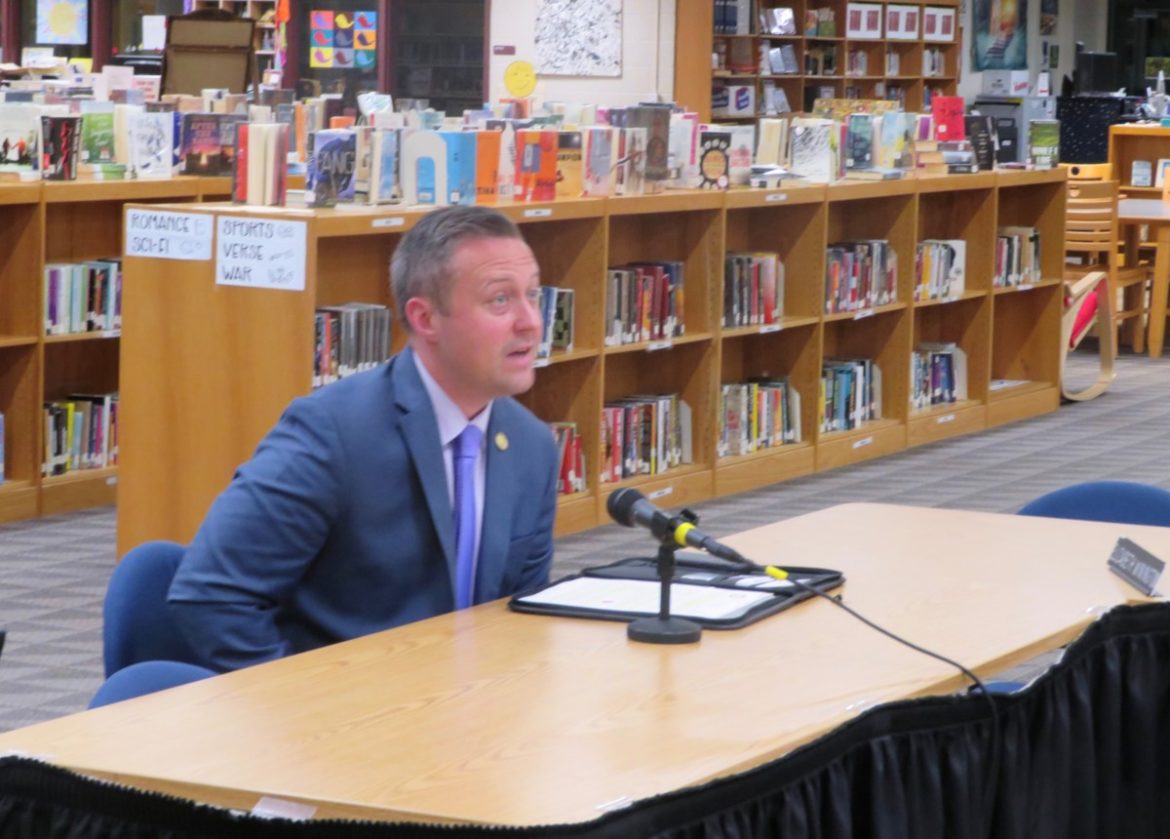 State Rep. J.P. Sredzinski, R-Monroe, updates the Board of Education on legislative news from Hartford at Monday's board meeting.

Gov. Ned Lamont had proposed a $2.2 million cut to the Education Cost Sharing grant for Monroe’s public schools in the state’s two year budget and wanted Monroe and other municipalities to shoulder 25 percent of the state’s share of teacher pensions.

But State Rep. J.P. Sredzinski, R-Monroe, says he was part of the bipartisan opposition to the governor’s proposal, because of the heavy burden on taxpayers. He says they succeeded in reducing the ECS cut and holding off on the state making towns pay for pensions.

“I think it will come back with the state looking for money,” Sredzinski said of the teacher pensions. “I just hope we have the same response of how unpopular it is.”

While giving a legislative update at the Board of Education meeting last week, Sredzinski said the state will soon have to pay out billions of dollars in teacher pensions.

“I think there will be a major crisis with funding our pensions at the state level,” he said. “It’s manageable now, but in the next five-to-10 years it will be a big problem without big investments from the state.”

Teachers pay seven percent toward their pensions and the state pays the remainder of the actuarially required contributions, according to Sredzinski.

He said Lamont wanted some municipalities like Monroe to cover 25 percent of the normal costs, phased in over three years, while “other municipalities, such as big cities, would pay far less.”

The opposition to ECS cuts led to Monroe having a total of $725,743 in cuts over two years in the budget that passed, rather than the $2.2 million proposed by the governor.

While Sredzinski acknowledged any lost funding is not desirable, of handling the smaller cut, he added, “that is much more manageable.”

Three bills proposing the regionalization of schools did not make it to the floor for a vote last legislative session.

Sen. Martin M. Looney, a Democrat and president pro-temore of the Connecticut State Senate, proposed Senate Bill 738, which would have created a commission to develop a regional school district consolidation plan to take effect in the 2021-2022 school year.

Sredzinski said the bill would realign towns with a population of fewer than 40,000 people (similar to probate districts) and require them to join a regional school district.

“I testified against it,” he said. “Dr. Zamary testified as well,” Sredzinski said of Superintendent of Schools Dr. Jack Zamary.

Senate Bill 874 was proposed by the Democratic leadership to create the Commission on Shared School Services to develop recommendations for the sharing of school services and additional collaborations among school districts, according to Sredzinski.

House Bill 7350, which was proposed by the Education Committee, would have required each of the state’s six regional education service centers to annually distribute an inventory of the services it offers to its member boards of education, including a model of regional special education services, according to Sredzinski.