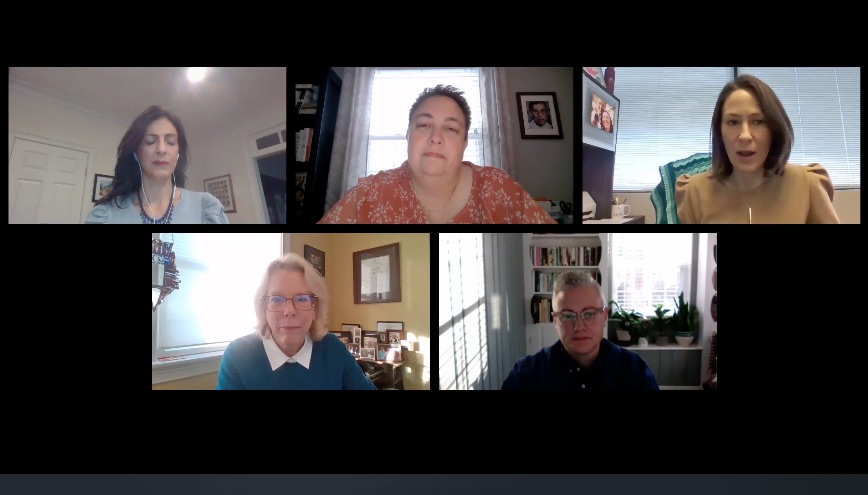 Meghan Scanlon, CEO and president of the Connecticut Coalition Against Domestic Violence, upper right, speaks during a legislative event Wednesday.

Domestic abuse and sexual violence rose sharply during the COVID-19 pandemic as many victims found themselves working and going to school remotely from home. But just when domestic violence shelters and other assistance programs are needed most, federal funding has been slashed.

Shelters are normally between 120 to 140 percent over capacity, but demand soared to about 180 percent during the pandemic, according to Meghan Scanlon, CEO and president of the Connecticut Coalition Against Domestic Violence (CCADV).

Scanlon shared this sobering statistic during a webinar hosted by the Connecticut Coalition Against Domestic Violence (CCADV) and its 18 member organizations Wednesday. Speakers outlined their legislative agenda and state legislators were among those in attendance.

The coalition includes The Center for Family Justice, which serves six area towns, including Monroe.

Goals include codifying the definition of sexual assault, eliminating the civil statute of limitations and hiring full-time child advocates.

“We want to invest more in our child advocates,” Scanlon said, adding it is crucial to reduce abuse continuing from one generation to another.

A temporary 35 percent cut in federal funds for Connecticut’s Victims of Crime Act grants means at least 52,504 victims stand to lose access to services in the State, according to the The Alliance to End Sexual Violence.

The coalition is turning to Connecticut legislators for help. Among their requests are nearly $12.3 million in one-time funding to be distributed to victim services agencies assisting victims of crimes throughout the State.

CCADV is asking for $1.4 million to pay for one full-time child and family advocate for each of its 18 member organizations.

An average of 5,000 children are served each year and current funding means each child would only receive 2.26 hours of services annually, according to CCADV.

During the pandemic fewer children interacted with systems that offer safety and support, like schools, where teachers and other professionals could notice differences in behavior attributable to abuse at home, according to CCADV.

As a result, the Connecticut Department of Children and Families reported substantially fewer referrals from educators over the past year, the coalitions said.

Meanwhile, the Alliance to End Sexual Violence said reports of child sexual violence to its member centers increased by 12 percent over the last year-and-a-half.

The Alliance to End Sexual Violence will monitor and support legislation that protects children from sexual violence, including the response and prevention.

Codify the definition of sexual assault

Consent is a critical factor in determining sexual assault as a crime in Connecticut, going by a “reasonable person” standard of whether the defendant reasonably believes there was consent, according to the Alliance to End Sexual Violence.

“Lack of action by the victim should never be a standard to define if consent was granted,” the organization said. “A common reaction by victims of sexual assault is for the victim to ‘freeze’ and not respond which may be construed as consent.”

Among the cases where victims are left with no recourse were “stealthing” (for example, an offender agreeing to wear a condom, but removing it during the sexual act.), rape by fraud (for example, a man getting into bed with a woman in a dark room, pretending to be her boyfriend), and trauma response being seen as consent, according to the Alliance to End Sexual Violence.

Lucy Nolan, director of public policy or the Alliance to End Sexual Violence, said medical schools use women or men going into surgery for pelvic and prostate exams for teaching purposes, without their consent, while the patients are under deep anesthesia.

The Alliance to End Sexual Violence wants to bar unauthorized pelvic and prostate exams for patients under deep anesthesia.

If asked, Nolan said studies show 75 to 90 percent of people will say yes to allowing their bodies to be used for medical training.

The current statute of limitations does not give survivors the closure they need or make them able to recoup funds spent on therapy, physical ailments and other costs of sexual violence, while those who harm them skirt accountability, according to the Alliance to End Sexual Violence, which notes how negative effects of abuse can last a lifetime.

“It is time Connecticut joins other northeast states like Vermont, Maine, New York, New Jersey, Massachusetts, and Rhode Island that have eliminated or lengthened significantly the civil statute of limitations, granting individuals at any age the right to file a suit,” the coalition says. “These states report no significant uptick in lawsuits ensuring only credible cases move forward.”