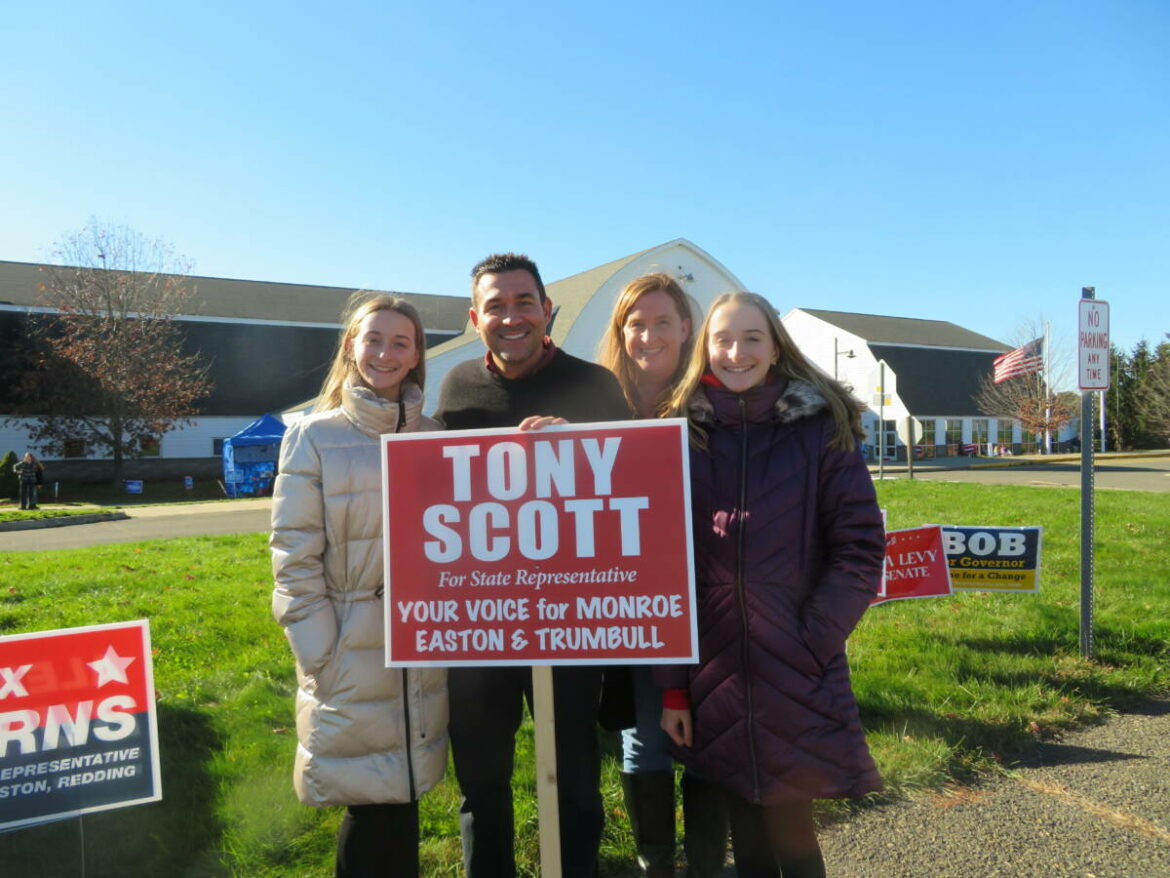 Voter turnout is steady this Tuesday, in an election year with a competitive governor’s race at the top of the ticket — and the optimism of candidates is sky high. 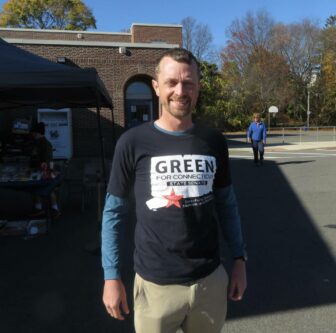 “I like seeing people engaged,” Green said. “Personally, my campaign team, we’ve done a lot of work leading up to today. We have no regrets. I knocked on 8,891 doors myself.”

A woman walking by turned to Green, smiled, pointed and whispered, “I voted for you.” Green smiled back and thanked her for her support.

“I’m excited to see what comes of the race and if voters in the district want to see someone new,” Green said. “I thought it was incredible preparation. If I am elected to the State Senate, meeting almost 9,000 people at their door, hearing the issues that matter most to them and the problems they’re facing, I feel confident in being their voice in Hartford and working hard for our families and our future.” 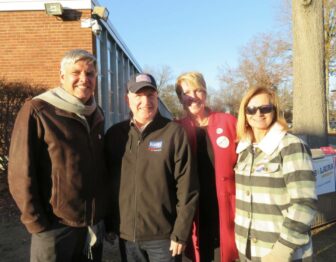 “I’m feeling optimistic,” Kelly said. “I’m getting a very positive response. I think it’s all good for Connecticut. Basically, Connecticut Republicans have been providing a better way the last few years, a clear alternative to the economic malaise visited upon Connecticut families.”

“The Democrat majority has been in total control of every lever of political power in the state for the last 12 years and yet we still have unaffordable health care, unaffordable housing and a 40 year high in inflation,” he continued. “We’re the second most taxed state in the nation and we’re one of the worst in job growth and income growth.”

“We’ve gotten a great response when we’re out there,” he said. “I think our message really resonates. We want to make Connecticut more affordable, support police and family values. Let families discuss kitchen table issues together, while schools stick to reading, writing and arithmetic. Let families raise their kids and get government out of the way.” 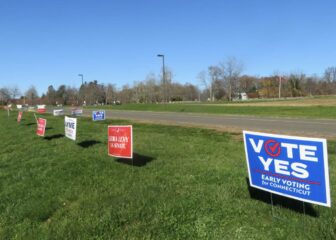 A long stretch of red and blue political signs covered the grass in front of the Samuel Staples Elementary School parking lot in Easton, the town’s only polling place.

A big red tent with balloons was set up in the parking lot for Jayme Stevenson, the Republican candidate running against U.S. Rep. Jim Himes, D-4th.

Scott arrived with his wife, Jenn and their two daughters, Lauren and Addison. 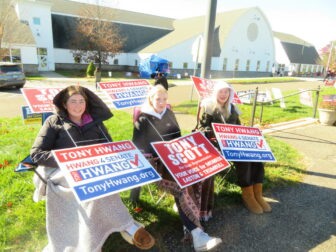 “It’s been very positive, which his great,” Scott said. “People on both sides of the aisle are coming out on this beautiful day to vote. I do feel good about my chances today. My opponent has been a ghost in the district, so it would be surprising if people vote for her without knowing anything she stands for.”

Scott is being challenged by Sheila Papps, a Democrat from Easton who has run a quiet campaign. The Sun received no responses in its efforts to get in touch with her and Papps did not participate in candidate profiles put together by the Easton Courier.

The polls in Monroe

Checkers inside the Fawn Hollow Elementary School gymnasium in Monroe busily checked voters’ I.D.s at tables and checked off who voted, then sent them to the ballot clerk, who handed them a ballot.

Every seat at the voter tables was occupied by voters filling out their ballots. Other voters stood in line to feed their completed ballots into the voting machine. 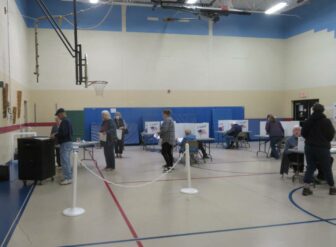 “We probably had 180 to 200 voters an hour,” Greg Metz, the moderator for District 1, said Tuesday afternoon. “At 6 a.m. there was a line of people waiting to get in. It was amazing. It was awesome.”

Every 900 votes or so, the ballot box gets full and needs to be emptied, according to Metz. “I’ve already done it once,” he said. “I will do it again before it’s over if the numbers hold up.”

Metz showed a black bag with the first batch of completed ballots, which were secured with a green, plastic seal.

During an interview at Monroe Town Hall, Karen Burnaska, the head moderator, said all four of the town’s polling places have been busy.

“The lines have been moving smoothly with no major glitches,” she said. 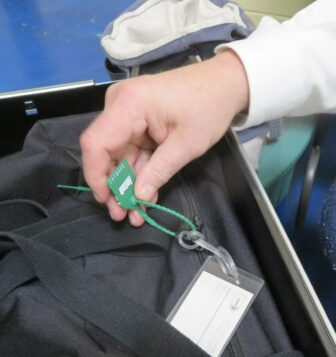 Greg Metz, moderator for District 1, shows a seal on a bag of completed ballots at Fawn Hollow Elementary School in Monroe.

Burnaska said some voters showed up at the wrong polling place or found they were not registered. The latter group was directed to go to Town Hall for Election Day Registration, which is being offered in the Council Chambers.

Burnaska praised the police department for ensuring an officer is always on hand to direct traffic at Masuk High School where, in addition to voting, two states games will be played — girls soccer and field hockey.

“Oh, the police have been terrific,” Margaret J. Villani, the Republican registrar, said, while working at her desk.

“It does seem busy, but it’s not the same as the numbers before,” Villani said, comparing this election to 2018. She said it may be because COVID-19 was not an issue four years ago.

Villani said the Registrars Office had more phone calls from people not knowing if they are registered or where to vote.

Elizabeth Edgerton is the official leading Election Day Registration in the Council Chambers, a role she has held for the past few years. As of about 1:30 p.m., she said 24 people registered.

“It’s not as busy as the Presidential Election two years ago, but it’s pretty steady,” Edgerton said. “Today is a healthy mix of people who moved to Monroe and are looking to change their registration, and brand new voters.”