MONROE, CT — When the Masuk High football team is behind by multiple scores in the second half the Panthers have opponents right where they want them. Well, at least that seems to be case following the team’s second wild comeback win in as many weeks.

In a battle of 5-2 teams, the Panthers overcame a 34-19 third-quarter deficit — and 350-plus yards and five rushing touchdowns by Danny Shaban — to shock visiting Joel Barlow of Redding 37-34 at home Friday night. 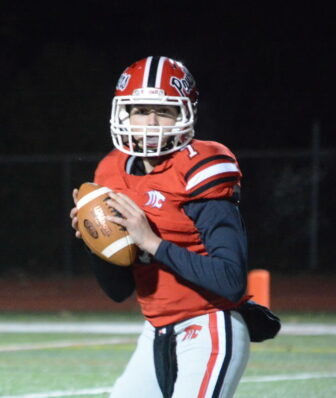 Another game, another comeback for quarterback Dylan Jackson and his Panthers’ teammates.

This comeback came after the Panthers shook off a 28-0 deficit to stun New Fairfield 29-28.

Masuk Coach Steve Christy appropriately referred to his team as “comeback kids” in the postgame huddle.

“I’m so proud of these kids,” Christy said.

The comeback did not look likely when Masuk went three and out and punted after Barlow’s early third-quarter TD. It began with a stop, as the Panther defense took control for the rest of the night. A 43 yard touchdown pass from Dylan Jackson to Jake Dellapiano and Nick Saccu’s two-yard conversion made the score 34-27 with 4:45 left in the third.

After another Masuk defensive stand, Ryan Saccu’s 69 yard run late in the quarter set up the Panthers with great field position, at the Barlow 11, with the score still 34-27 to begin the fourth. That play set up Dellapiano’s four yard TD run on third down. Michael Epifano’s extra point kick tied things at 34 apiece with 11:56 to play.

Masuk forced another Barlow punt and moved the ball before a quarterback sack and failed fourth down conversion gave the pigskin back to Barlow. The defense again forced a punt and Masuk took over at its own 32 with 3:33 remaining. 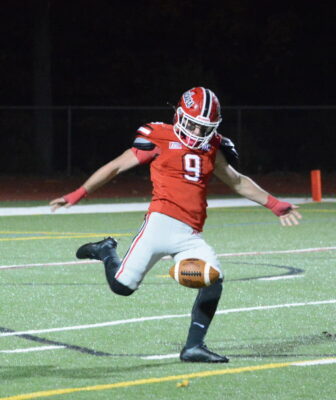 Michael Epifano punts the ball in Friday’s game against Barlow. He later booted a game winning field goal in the waning seconds.

A big pass play over the middle to Ryan Saccu gave Masuk a first down at the 13 yard line, and a Ryan Saccu carry set up first and goal at the three as the clock ticked away. Masuk played for a the field goal and ran down the clock, rushing three times for losses back to the eight yard line. That set up Epifano’s go-ahead 25 yard field goal with 18 seconds left.

In the first half, Jackson connected with Justin Briganti for a 15 yard TD play to open the scoring.

Jackson hit Ryan Saccu for a 14 yard touchdown pass, increasing the Panthers’ lead to 13-0. Barlow got the next score on Shaban’s 80 yard run to paydirt. Masuk answered on Nick Saccu’s 12 yard touchdown carry. Shaban scored on runs from 54, 66 and 10 yards out as Barlow built a 27-19 halftime lead.

Jackson completed 21 of 35 pass attempts for 378 yards, three touchdowns and an interception. Jackson has compiled 378 and 375 yards passing in each of last two games, respectively.

Ryan Saccu had nine catches for 143 yards and a TD.

Nick Saccu rushed 15 times for 140 and a touchdown and had five catches for 53 yards.

Briganti had three receptions for 50 yards and a score. Briganti was also a monster on defense and Epifano played tough defense as well, Christy said.

On a sad note, Jason Champagne left the game with an injury.

“What an amazing job how you dug down and dug deep to win this game,” Christy said to his defensive players after the win. 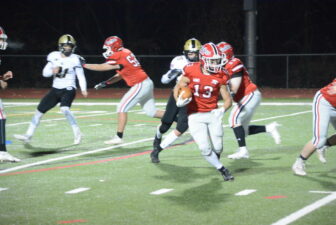 Masuk’s Nick Saccu and the Panthers’ offensive line clicked for some big runs in Friday’s game against Barlow.

“The defense just steps up every week. They make plays in the second half,” said Jackson, adding that the success he had moving the ball should be credited to his offensive line.

“What they did last week really helped get this done,” said Christy, adding that belief is powerful and his players are learning things that will help them in life off the football field. “When you’re down and you’re out hang together and stick together.”