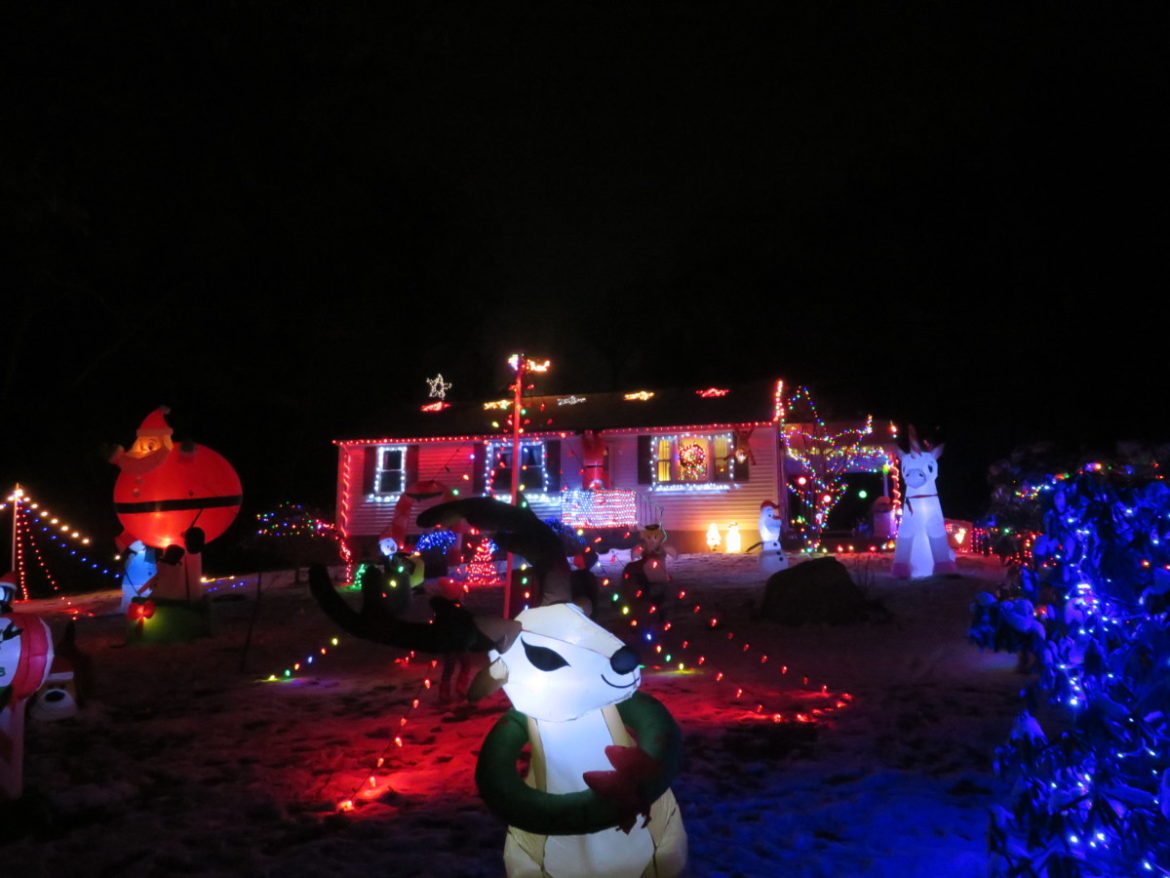 Snowmen, reindeer, Santa Claus, an angel, unicorn and other Christmas decorations are squeezed onto the front yard of the Knouse family home on Moose Hill Road.

A large Santa Claus decoration hangs from the roof over the front porch of the Knouse family’s home at 248 Moose Hill Road and illuminated red candy canes line the driveway leading to the ranch-style house. A wreath over one window is among the colorful Christmas lights.

Their roof has a helicopter decoration affixed to one old satellite dish and a star attached to another and the light display includes a row of stars Don Knouse made with yardsticks and fishing line.

The edge of the front yard has a row of small trees with Christmas lights that Lori Knouse made out of tomato cages and zip ties. Around 35 inflatable characters are tethered to the front lawn.

“We’re just starting to do stuff on the garage,” Don Knouse said Thursday evening. “There are lights on it. We’re always looking to expand.” 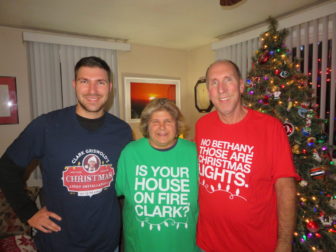 Nick Knouse, left, with his parents, Lori and Don, who are wearing “National Lampoon’s Christmas Vacation” themed T-shirts their daughter, Taylor, bought for them. Like the movie’s main character, Clark Griswold, the couple goes above and beyond with their Christmas decorations.

Don and Lori Knouse sat around their kitchen table with their son, Nick, to share the story of their yard decorations, which they amped up a few years ago.

“Four years ago, we started pushing the limit of what could fit in our yard,” Nick said.

In 2015, Lori submitted a photo of their house decked out in holiday lights to WTNH. Don said they were cleaning their house one night, when they saw the picture appear on the news.

Lori said they were inspired by a house on Macdonald Road in Trumbull one year. Among the houses in Monroe they admire most is a home on Admiral Drive and the Katz family home on Purdy Hill Road.

Four years ago, Don said they put up signs saying, “if you like the display, please donate to the Monroe Food Pantry.” The couple has a bin for nonperishable food donations in their yard.

“Two years ago, I was going every day to drop it off at the food pantry,” Don said.

“People are generous in this town,” Lori added.

Lori and Don Knouse said some of their holiday decorations are at least 26 years old. Among the oldest are glow molds of Santa and Frosty the Snowman, according to Nick. Over that time, Don said he only had to replace one light bulb.

“We try to have something new every year,” Lori said.

Among this year’s new decorations are a Mickey, a Mini, a unicorn, a Santa and his sleigh, a New England Patriots logo, cat and monkey inflatables, a reindeer hanging from the gutter and an American flag made of lights on the porch.

A neighbor, Lindsay Grant, stopped by with her two children, Harrison, 5, and Bowen, 3, so they could see the light show.

In fact, Harrison helped with the placement of the inflatables. 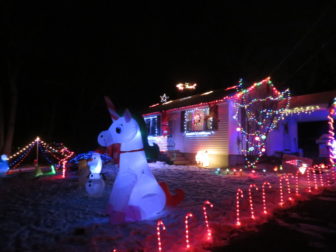 Nick Knouse says he put up 65 candy cane decorations along his family’s driveway this year.

Don said it used to take him one day to put up the yard decorations himself, but now it takes nearly a week with everyone pitching in — and a lot of trips to Home Depot for extension cords and bulbs. Don said his family uses close to 70 extension cords.

“I try not to damage anything,” he said.

“He did one year,” Lori recalled. “He had a Santa and his reindeer on the roof.”

The Knouses had to replace their roof sooner than they would have liked. Though, most repairs have been easier over the years.

“I’m getting pretty good at repairing inflatables,” Don said. “We have parts from YardInflatables.com. Motors go and what have you.”

The couple has considered having a triple circuit breaker. “Every year, we discussed having a separate line for the lights,” Don said. “We got a quote once and it was a little over $3,000. I’m sure some year we’ll get that done.” 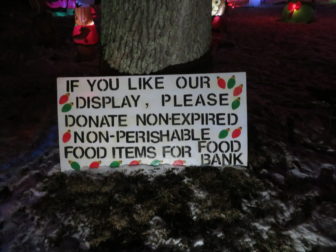 Though their house is lit up like a space ship had landed in their yard, Lori said all of the lights are LEDs, so the Knouses’ electric bill is only about $100 higher for the four weeks their display is up.

“We really enjoy doing this and helping the food pantry and people in need,” Don said. “We’re both in retail. We’re regular blue collar people, but we do this because we love it. We really appreciate the people who donate the food items. That means a lot to us.”